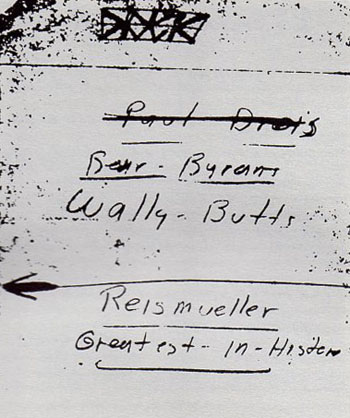 Fifty years ago today, on the morning of Thursday Sept. 13, 1962, a insurance agent in Atlanta, George Burnett, attempted to place a call to the office of one of his business partners. After hearing some electronic noises, Burnett heard the operator say "Coach Bryant is out on the field, Coach Butts but he is on his way to the phone. Do you want to hold or do you want him to return the call?"

Butts chose to wait and a short time another person came on the line. "Hello, Bear," Butts said. "Hi, Wally, do you have anything for me?" was the reply.

That single overheard phone call led to an ordeal that ruined Butts professionally and Bryant later said took ten years off his life.

Less than two weeks after Bryant and Butts spoke on the phone, Alabama demolished Georgia 35-0 in at Legion Field. A month after that Atlanta-area sportswriter Furman Bisher published a story in The Saturday Evening Post alleging Bryant taught his players to deliberately inflict injury on opponents and cited a controversial incident in 1961 when a Georgia Tech player had suffered a cracked jaw and lost several teeth.

Bryant eventually sued Bisher and the magazine for libel but by that time Burnett's notes of the phone call had made it to the hands of the Post for a mere $5,000. On March 23, 1963, the magazine published "The Story of a College Football Fix" penned by Frank Graham Jr. (Bisher contributed numerous quotes from University of Georgia officials which were later proven to be entirely made up).

Two days later Bryant and Butts sued Curtis Publishing, the owner of The Saturday Evening Post, for $15 million. The result was a legal battle that waged through the off-season resulting in a trial that August where Butts was awarded $3 million (he later collected about $134,000). Bryant settled out of court for $300,000.

If you are interested in reading more about this sordid story, check out this piece done by none other than Dawg Sports' own T. Kyle King two years ago. It is a review of Jame's Kirby's 1986 book on the scandal "Fumble" which is the flawed 'authoritative' tome on the matter although it is currently out of print. If you'd like to see the rest of the infamous 'notes' penned by Burnett during that fateful phone call fifty years ago, follow the jump (they were presented as evidence in the trial and, as such, are part of the public record).