If it's Thursday and you're working hard to avoid a letdown during a huge, primetime game in Sanford Stadium against . . . [checks schedule, tilts head to the side like a juvenile German Shepherd] . . . Florida Atlantic, then you need a drink. I'm here to help. 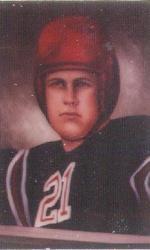 The Frank Sinkwich Award will be presented at the end of the season to the toughest player on the Georgia football team. That may be Jarvis Jones, or some other deserving old man who hits people in the mouth and takes their candy. Mostly this was a public service announcement. but partially a chance to post a picture of a guy who was playing old man football back when it was just, you know, football.

Two games into the season we have a clear depth chart at tailback and a smidgen of data with which to evaluate it. Todd Gurley leads all 'Dawgs with 165 yards rushing, and fittingly sits atop the roster. Ken Malcome is the #2 tailback and has gained 65 yards on the ground, while Keith Marshall has churned out 78 yards. Those numbers aren't all that exceptional after two games, but this is, especially for a Georgia offense that's desperately needed depth in the backfield for years: all of them have at least 13 carries on the season (Marshall leads with 22 carries).

I think the takeaway at this point is that, for the first time in a while, we have more than one tailback capable of getting the job done, and the coaches realize it and are distributing the ball accordingly. Malcome is still in more often on clear passing downs, one would assume owing to his blocking ability, but the workload is being very widely distributed. As the season goes on and these guys have to gain tough yards against SEC defenses, that strategy should pay dividends.

Sure, I was a little unnerved by Todd Gurley's fumble on the Bulldogs first snap from scrimmage against Missouri, which I attribute to a freshman being amped up in a big game situation. I like the idea of having Ken Malcome's (relative) experience backing him up and Keith Marshall being used as a fresh set of legs and a speedy change of pace. The weekly cocktail's namesake has come from the defensive side of the ball so far this season, so it's time to get offensive. Let's salute one of those tailbacks who we hope will carry us down the stretch with . . .

The Malcome in the Middle. Combine 1 ounce of coconut rum, 1/2 ounce of amaretto, and 3 ounces of orange juice in a cocktail shaker and serve over ice. Again, we here at Dawg Sports don't want you to get scurvy, or have your teeth fall out, or suffer any of the other truly vile symptoms of vitamin C deficiency. You're welcome. Further, let this stand as proof that the right three ingredients can combine to make all the difference in the world. Until later . . .