Yes, it's football season, but the gridiron isn't the only place where Bulldogs compete. In our commitment to bring you news from all of UGA athletic endeavors, Dawg Sports brings you this weekly summary of what's going on in Georgia's other programs.

Good morning, Bulldog fans. If you haven't downloaded this week's Dawg Gone Podcast, what are you waiting for? Better yet, subscribe so it'll sync right to your device. I hear some company out in Cupertino may have a new gadget for you.

Now on with the Dawg action. 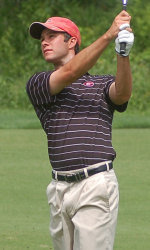 The men's golf team got the season under way at the Carpet Capital Collegiate Championship, finishing second on Sunday with an eight-over-par for the tournament behind Texas and ahead of SEC rivals Bama, LSU, and Tennessee, as well as non-conference rival Clemson. The Dawgs will be in Alpharetta 23-25 September for the PING/Golfweek Preview.

The men's tennis team got fall play started at the Southern Intercollegiate Tennis Tournament in Athens last weekend. Seven players, including four freshmen, advanced to the second round, as did all UGA doubles teams. On Saturday, junior Hernus Pieters, sophomore Nathan Pasha, and redshirt freshman Casey Kay each advanced to the quarterfinals (Pieters defeated a Yellow Jacket and a Gator). Pieters's play continued all the way to Sunday's championship round but fell to Ole Miss's Jonas Lutje for the tournament title.

Katrina McClain, former member of the women's basketball team from 1983-87 was inducted into the Naismith Memorial Basketball Hall of Fame last Friday. She and UGA teammate Teresa Edwards are the only two women who played at current SEC schools to receive the honor.

The women's golf team finished fifth at the Cougar Classic, which wrapped up Tuesday, carding a team score of 3-over par. The tournament field was high-caliber, with all participating programs highly ranked by various publications, so it's a strong start. The team next competes in the Mason Rudolph Championship in Franklin, Tennessee, 21-23 September.

The soccer team dropped to 4-3 with a defeat to visiting New Mexico Friday night and opens conference play against Vandy tomorrow night in Athens. If you can't make it to watch the game live, you can watch live via georgiadogs.com.

In other bits: the baseball team started fall practice this past weekend; All-American gymnast Noel Couch is blogging at the official UGA Athletics site, so you can keep up with what's going on in gymnastics.

This quick zip around the athletics program should bring you reasonably well up to speed. GO DAWGS!