Continuing the Dawg Sports 2012 Season Preview series, we're up to the fifth game of the season against the Tennessee Volunteers. If everything goes as we've predicted thus far, the Bulldogs are a not-too-shabby 4-0 and have a combined margin of victory of 140 points, which works out to be 35 points per game. If you're saying "I'd take that in a heartbeat," especially since two of those victories include contests against SEC East opponents, then you're certainly not the only one.

However, this is the last game in Athens until November, and the game immediately following this one against the Vols is against the Gamecocks. We'll get to all that later. First, here's the vital stats:

Mascot: Smokey (a blue-tick hound who could be a really good dog if he weren't so damn ugly and annoying)

In order to adequately emphasize to you how important this game is from an "IT'S A TRAP" standpoint, I'm going to pull out the big guns. Yes, it's time for GRAPHICS (which are not copyrighted, by the way). 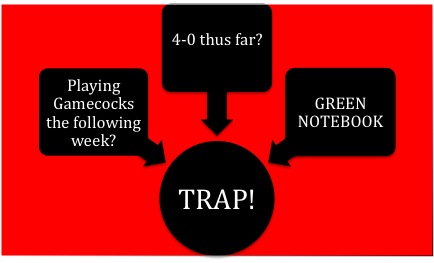 All signs point to TRAP.

Much more insight, and GRAPHICS, after the jump.

Now, if you're like me and wonder how the Tennessee game could ever become a "trap" game, it's really not that far-fetched. Sure, we're a little over a decade removed from beating UT and tearing down our own goalposts in Sanford, but no one in the SEC thinks of Tennessee now like they thought of Tennessee then. Once the Vols decided to hire Lane Kiffin, their respect was lost and the subsequent circus didn't do them any favors, either.

So now, you have the Bulldogs rolling into this game in late September with a nice 4-0 record and the Gamecocks looming large the first weekend in October. If Tennessee loses to N.C. State (not likely, but possible) and loses to Florida (more than possible), then there is a significant chance no one will give this game much thought. That would be a huge mistake.

The Dawgs need to maintain focus in order to win this game, but what exactly is "focus?" For us, "focus" is winning five key battles within the game. If we do these things as best as possible, we'll have this game won by the beginning of the fourth quarter. 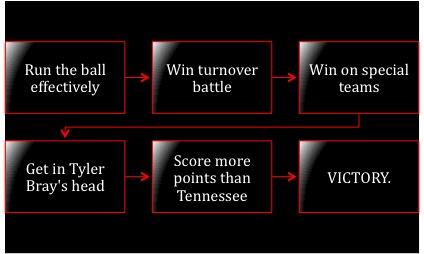 So much easier to understand in picture form...

1. Run the ball effectively: The basic fact in football is that when you have control of the ball, the game becomes increasingly tougher for the other guy. If there's ever a chance for a Georgia team to remind us of the one from 2002, it's this year. Granted, our offensive line has got to grow into itself, but we have a mixture of backs that could consistently get 3.5 yards per carry if the holes are there. Even if you consider Richard Samuel a fullback, reports are freshman Todd Gurley has looked good early with his big frame, and don't forget about Boo Malcome, who is currently our first-team running back.

The real key is wearing down a Tennessee defense that should be MUCH better than last year's squad. The Vols return nine starters on defense, and are particularly laden with upperclassmen up front. If you can run the ball effectively, you can take advantage of some opportunities to air it out, and with our speed in the WR corps, the opportunities will be there.

2. Win the turnover battle: One of my favorite lines from Moneyball is "When your enemy's making mistakes, don't interrupt him." The easiest way to lose a game is by doing things that make it harder for you to win it. It's not about playing not to lose. There is real value in aggressive play calling and bringing the punches directly to the mouths of the guys on the other side of the ball. There is a lot of negative equity in killing a drive because you made an errant pass or didn't protect the ball, but there's a lot of positive equity in forcing the guy on the other side of the ball to give it to you before it's strategically advantageous.

3. Win on Special Teams: This is the one area of our team in which I have no idea where we stand. Marshall Morgan is our new placekicker and according to the scouting services and his high school effectiveness, we should be fine. Keep in mind that we've said that about Blair Walsh, but we also said that about Andy Bailey. The truth is, we just don't know until the season starts.

Also, let's not forget that Collin Barber will be taking over punting duties from Drew Butler, so his skill at this point is relatively unknown as well. Early reports are that his distance and hang time could use some improvement, and that Marshall Morgan may actually pull double duty if Barber doesn't solidify himself as an option. No one will know until we get a little deeper into fall camp, but if UGA can't nail clutch kicks or give the defense plenty of field to work with, we could be in a world of hurt.

4. Get in Tyler Bray's head: This one is my favorite. Tyler Bray is one or two mistakes away from a complete meltdown. Lots of mistakes = meltdowns = turnovers.

His maturity isn't in question at all. His star-studded name tattoo and beer bottle throwing incident has firmly solidified that the guy is an Ed Hardy shirt away from telling people he's a record producer and has "big things on the horizon." He's basically Casey Clausen, but instead of looking like Iceman, he looks more like Goose.

Truthfully, I'm looking forward to Jarvis Jones spending lots of quality time with Tyler Bray, much like David Pollack did with Clausen.

5. Score more points than Tennessee: Simple, but understated, especially in the Mike Bobo era. Not to harp on this, but Florida, LSU, Alabama and Arkansas all scored at least 33 points against Tennessee. The points are there to be had, especially when the Vols are on the road. When you're playing one of the "Big Four," there's no such thing as running up the score (thanks, Al Sharpton!).

Prediction: Tennessee should be much improved this year over years past, but it's still going to have a hard time making eight wins happen. Their home schedule is just as tough as their away schedule, though they do benefit from playing Florida in Neyland Stadium. However, even though they could face UGA with both teams sitting at 4-0, I don't see it as a likely scenario and with the turmoil that the Volunteer program is currently facing, the wheels could come off if they lose to Florida and UGA early.

IF, and the all caps should tell you that it's a big "if," Georgia can avoid looking past Tennessee before traveling to South Carolina, I like the Dawgs in a contest that's not really a contest. Tennessee is way too bi-polar these days and even though they have lots of great talent, that talent is full of guys like Da'Rick Rogers and Tyler Bray. Look for Georgia to roll, and for this game to be easily in hand by the start of the fourth quarter. 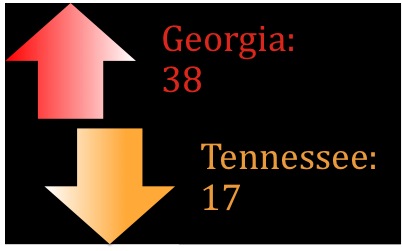 I added a little gradient flare on the arrows to give it depth. Truthfully, it's a work of art.

If you'd like to read our Buffalo, Missouri, Florida Atlantic, and Vanderbilt previews, please click their links to be taken to those particular postings.