Share All sharing options for: Dawg Sports Down Unda': Installment Two - The Olympics

Before moving down under, I had traveled primarily in the United States and Europe. By and large, in terms of patriotism I was firmly behind the idea that the United States had the market on overarching patriotism cornered. Now that I've been able to experience an Olympics in Australia, however, I'm beginning to wonder if the Ozzies wouldn't give us a run for our money; they can aptly be described as 'a boisterous bunch'. As such, the broadcast of the Olympics, and the delivery associated with it, provides an entirely different feeling to watching the games. For one, eyes are glued to the TV, so advertisements are all over the place, promoting Australia, Australians, the Australian spirit, you name it. Certain sports that are covered extensively in the States are practically ignored altogether, while other (what I would consider less popular) sports are shown on account of including Ozzies. I get it, but it's nonetheless frustrating. Things like this outstanding commercial from Telstra, the largest telecom carrier in the country, however, are not frustrating in the least. Seriously, you tell me you're not singing the song by the end...oh, and read on after the jump!

Building on that ad, Australian television is currently filled with these sorts of inspirational patriotic advertisements. As I stated earlier, Australians are a boisterous, patriotic bunch. Think about it...it's a country of 23 million people on the other side of the planet from the United States, yet the majority of you would likely recognize the 'Ozzy Ozzy Ozzy, Oi Oi Oi!' chant as Australian immediately. Ghana's around 23 million people...quick, tell me what cheer Ghana's known for! This, of course leads to numerous ad campaigns to try to capitalize on the patriotism and make some money (you can't fault anyone there). A vitamin company, Swisse, has partnered with a number of Olympians and Paralympians for their ad campaign. Qantas airlines has put 'Spirit of Australia' on the sides of all of their planes, and they, too, have a corresponding television campaign to match.

So, what else is different, really? Well, field hockey (or simply 'hockey' as it's called here) is shown ad nauseum. Field Hockey, to me, just seems silly. Essentially, it's playing hockey on a field (shocker, that one) with shorter sticks and no pads...other than that, the rules seem to be fairly similar. The problem with it, though is that the sticks are entirely too short, so you end up having to run around bent over the entire time, and I just can't imagine that's comfortable. On that contrary, some of the more popular events in the States - like gymnastics or diving - were avoided here and shown only sparingly, as there weren't Australians with a chance to win or compete well in those events.

Essentially, Channel Nine (the actual name of the channel that has broadcast rights for the Olympics here) shows five sports - swimming, equestrian, rowing, field hockey, and badminton. Occasionally, you may catch archery (woot woot), basketball, or fencing, but don't cross your fingers. The other day, I was watching women's beach volleyball (the only time I've seen them show it), and there were two German teams competing against each other. Now, these women's volleyball players were such great athletes that I didn't have any desire to change the channel, and really, I could barely take my eyes off the tv with how intrigued I was by their play. What did Channel Nine do? Oh, nothing, they just decided to switch mid-match to some overweight Australian guy throwing the shot-put. I'm sorry, but I don't think NBC would ever switch from women's beach volleyball to a bloke throwing a shotput, but maybe that's just me.

On the subject of sports being a bit different, another point that's slightly different here is that the Australians have names for their national teams. In the States, it seems that we don't feel we need mascots for our national teams, as just being the United States is athlete enough. In Oz, however, that isn't the case at all. The Australian rugby team, for instance, is the Wallabies. The soccer team is the Socceroos, the women's basketball team the Opals, the Field Hockey squad is the Kookaburras, among many others. Honestly, I like the idea of the mascot that represents the country in some way and is still patriotic, and it would be nice if the squads in the States would adopt a similar approach. 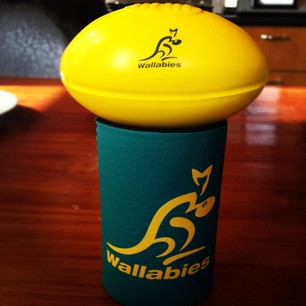 As you can see, marketing with the Wallabies is popular. Also, yes, this is my picture, which is why you can see a plate in the background on my kitchen table.

Finally, the 'success stories' of the Olympics and the Olympic athletes are all geared around Australians. Just as in 2008, when we heard about Shawn Johnson, Alicia Sacramone, Michael Phelps, and Cullen Jones, in 2012, the US media is covering Gabby Douglas, Ryan Lochte, the Fab Five (even though that name was already taken), Missy Franklin, and (once again) Michael Phelps. Well, down under, that's entirely different. We hear about stellar swimmer Alicia Coutts, who's medaled more than any other Australian athlete, or comeback kid Kim Crow, whose track (or athletics in ozzie english) career was ended due to an ankle injury, but came back and medaled in rowing instead.

Ultimately, I'd still prefer to be watching the Olympics in the States, but I'd be lying if I said that being in Australia and experiencing the nationalism that's exhibited all over the country hasn't been very refreshing, and it's reminded this proud American that not only am I still proud to be American, but I'm pulling for the Australians as well. Ozzie ozzie ozzie, and all that. Oh, and of course, Go Dawgs!