Russ Breaks the Color Barrier and is Crowned Uga IX

Share All sharing options for: Russ Breaks the Color Barrier and is Crowned Uga IX 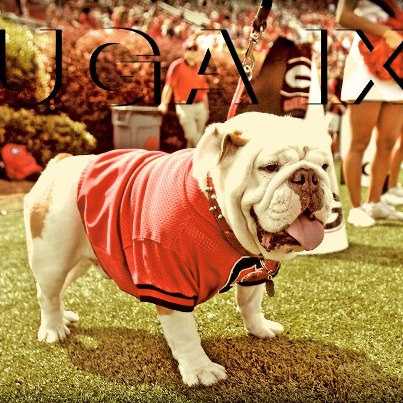 After we exclaimed here that Russ should be the official mascot, it seems the Bulldog Nation got some traction by sending letters and emails to UGA and the Seiler’s, and pushed the administration to do what was well overdue, making Russ the official UGA mascot and crowning him Uga IX. Uga IX is the first non all white Uga, sporting a large light brown patch on his hindquarters, right shoulder, and a brown ear. He’s the half brother of Uga VII, and has served on and off as "interim" mascot for the last 3 years, and has served as mascot for the entire 2011 season. Part of the hesitation from Sonny Seiler to crown Russ as Uga earlier on has been his brown spots, and later on his age (Russ is 8). However, as we discussed a few weeks ago, with Russ serving 2011 and then as announced all of 2012, he essentially was the UGA mascot, minus the official title. Now he gets the official coronation ceremony, the collar, the leash and his new reigning title of Uga IX. You can also find some reading on the story from Georgia Dogs

In a very special exclusive interview, Dawg Sports was able to ask Russ a few questions:

DS: Russ, how do you feel about being crowned Uga IX after all this time?

Russ: Does that mean I get more samiches?

DS: Good point Russ I hope so. Do you have any plans for your reign as Uga IX?

Russ: Well, it be cool if one of them Auburn fella’s got to close too me just once. Or any Tiger. My kin hates tigers. And Gators. And I like riding around in that old junkie car them yella jackets have, it makes them so mad.

DS: I don’t see anyone in Dawg Nation disagreeing with you on that Russ. Speaking of which, do you prefer Russ or Uga now?

Russ: Which one pays more?

DS: Well, as Uga you get all the travel benefits, your own dog house, lots of ice to sit on, and picture day with the kids.

Russ: You mean all the stuff I’ve been doing anyway?

Russ: About that samich…

Because of the time to prepare for the pregame ceremony and early season hot weather, Russ, er Uga IX, will be "collared" with the official Uga collar in a formal ceremony on Sep 15 with UGA President Michael Adams. This is a good reason to get to the game early. It’s a wonderfully fun ceremony that would leave outsiders a little startled at the seriousness of it, but at UGA, we take our mascot business serious. The children love it by the way. Dawg Sports sends out its thanks and "good call" to the University and the Seiler family, we wish Uga IX a great 2012 and successful reign.