Fifteen thoughts after (and before) the storm...

Share All sharing options for: Fifteen thoughts after (and before) the storm...

We had a bit of weather down here in the greater Ft. Lauderdale area Sunday afternoon as Isaac rolled by. Folks are getting nervous on the northern Gulf coast, and rightly so. What's interesting is that the track of this storm could mean a big rain event for much of the Southeast, possibly into Friday and Saturday if it lingers. As of this writing, I don't think Athens will be affected by game time unless this thing takes right turn over the Gulf (not expected), but there are some cities that have home games and are within "cone of uncertainty" late in the week: Baton Rouge, Starkville, Auburn, Tuscaloosa, and Lafayette, LA where Texas A&M opens up their season. Still a long way to go before we begin to pin down where Isaac winds up, but this storm is problematic to forecast beyond 2 days...so the entire Gulf Coast region is in real jeopardy. Prayers sent... 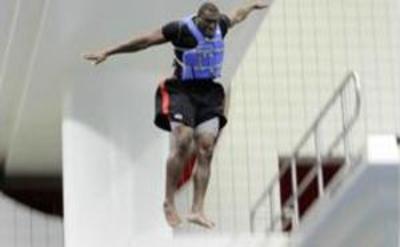 via georgiadogs.com
Anybody else notice how massive Cornelius Washington looked as he was standing on the diving platform at Ramsey, preparing to jump with his life vest on? Washington's performance last season took a little dip after his suspension, but it sounds as if he's focused and primed for big things this season. I believe he's going to spend a lot of time in our opponents backfield. And I don't believe for a moment that life jacket would do him any good...

Every program has off-season issues. Some just don't get caught or manage to keep it on the Q/T better than others. Lately, Auburn has been making all kinds of news for all the wrong reasons. This Kevin Scarbinsky article simply makes me wonder how focused Auburn can truly be when the play Clemson next weekend. Right now, Auburn seems to be at a crossroads in many ways. There's a ton of "stuff" going on in the background, yet they still recruit lights-out as if butter wouldn't melt. And I know butter.

Back to our defense for a moment: I know we have a few issues that could affect us when we travel to Missouri in a two weeks; mostly in the secondary due to suspensions. Yes, I realize the final word hasn't come down yet regarding a few of our players which instantly change things, but it's not like the guys who have to play aren't without talent. Corey Moore has had a very good camp by all accounts, and if Rambo sits, I'm feeling better about Moore's ability to step it up. At corner, will Damian Swann be ready for his moment? I'm not too worried, but it sure would be nice to have our regulars back sooner than later.

Count me as one of the those people who was pretty bummed when Da'Rick Rogers flipped to Tennessee in the 11th hour a few years ago. Because Rogers flipped, we were able to offer Kenarious Gates, almost as an afterthought. Even if Rogers wasn't a punk, I wouldn't trade his talent for Gates' value (and character) for any amount. Sometimes, things just work out.

I just received a call from Dear 'ol Dad, the procurer of Mizzou tickets. He informed me that I would not be sitting with the rest of the family, who will be clustered in the "visitors" section. I'll be in the student section. This could be interesting. The other ticket in the student section will hopefully be occupied by my 6-3, 250 lb. brother-in-law, in case I get a bit mouthy. I'm not a coward, just old and a bit slower on the draw...

Mizzou has some unfortunate injury issues on their offensive line. Their latest casualty occurred late in the week. We must exploit any weaknesses our opponents have, but I hate hearing about stuff like this...to any player*. It's part of the game, but some teams just seem to get hit at a particular position over and over. Missouri's O-line seems to be a bit jinxed at the moment. (TIm Tebow not 100%)

Word of the Day: Depth. As thin as we are on the offensive line, we've got so much talent to rotate on our front 7 that it's almost unfair. I can't recall more quality and quantity on this side of the ball, ever. Most published depth charts are from post-spring practice with some of our freshmen not even listed. If Jordan Jenkins can get enough snaps, he could garner some accolades by seasons end. Word of the Day runner up: Versatility. We've got guys playing standing up or a hand in the dirt all over the place. It's confusing. That's the point, I think.

It looks like Florida's quarterback battle will continue to evolve beyond the end of camp.

"It’s a battle," he said. "They’re trying to come out there and be perfect every day. You can see it from day one, whether there’s a dropped ball or an incompletion or anything, they get pissed. They get on themselves and they get on us. They want perfection. They know it’s a position battle right now."

Sounds very unsettled to me. Funny, he didn't specifically mention any completions....

South Carolina's Connor Shaw seems to be having some back spasm issues. Does anyone honestly believe this is nothing more than disinformation? Everyone is hurting a little bit by now during pre-season camp. Spurrier is just setting up Vandy, IMO. My pinkie hurts like hell, but I won't keep me from typing (although I'm sure some of you wish it would). Trollin' trollin' trollin'...

How much is a used Ford Mustang potentially worth? Inquiring minds in Indianapolis want to know. I recall that Will Redmond was thought to be, by some recruiting services, a Georgia lean during the recruiting process last season and his eventually signing with State was a bit of a stunner. I mean if we start losing recruits to Auburn Mississippi State, there's got to be cheating involved, no? If I would've been recruited and offered a car, it would've been a '73 Pinto with a broken muffler bracket and no engine.

Thursday night cannot get here soon enough. Anyone else with me here? Christmas is nice, but this is truly "The most wonderful time of the year." Ah, yes. College Football begins anew...and the Braves stumble into the playoffs (or worse). Times are never better.

When senior defensive players start raving about freshmen running backs, it gets my attention.

Q: Who will be the breakout offensive player this year and why?

A: I think those backs are going to be great. I know they’re young, they’re freshmen, but I really think Ken (Malcome) and Todd (Gurley) and Keith (Marshall) are going to do great things. Just watching them in practice, that’s a really good back tandem.

I won't be convinced as to what we have until I see it produce against better competition (read: Missouri), but I'm really anxious to see how Boo, Gurley and Marshall (not necessarily in that order) do under the spotlight. Can the young guys pick up the blitz? Time will tell.

Special teams still worry the ha'yull out of me. Vineyarddawg nailed it:

5) Special Teams - It's not a stretch to say that our poor special teams play was a key factor in all 4 of our losses in 2011. We had the worst kickoff coverage in the SEC last year, and our All-American senior placekicker couldn't get out of his funk all year long. This year, we're starting true freshmen at both kicker (Marshall Morgan) and punter (Collin Barber), so we need you boys to hit the ground running. And I honestly don't know how we're going to fix the kickoff coverage, but we need to find a way to somehow do it. It probably won't cost us this game... but if we don't get our problems sorted out early, it could easily cost us game 2 and future games down the road.

Finally, just a thought on Neil Armstrong. Many of you who read this weren't even around when Armstrong walked on the moon on July 20, 1969. I was 8 years old when this incredible event fulfilled the wishes of John F. Kennedy when he committed this nation to put a man on the moon and return him safely before the decade ended. I vividly remember watching a grainy black-and-white picture from my Aunt's living room and how proud I was afterward. Neil Armstrong was always a childhood hero of mine, but Moon Missions became nearly commonplace for a few years as the Apollo program died a natural death. Armstrong became lost in my consciousness, but yesterday's news of his passing really affected me. I'm sad he's gone. I bet his view of Earth is even better now than it was back in '69...

*except Nick Fairley. I hope he has incurably in-grown toenails.