Share All sharing options for: You're On Notice, Dawg! WOOOOO FINALLY Week 1

Good evening, Bulldog fans. After the long wasteland of no football known as summer, we have finally arrived. Yes, friends, it is finally game week! This Saturday, your Georgia Bulldogs will be taking the field between the hedges in Sanford Stadium to kick off the 2012 football season against the Bulls from the State University of New York at Buffalo.

And with a new season comes new changes in many things, including this regular weekly feature. When I started writing this little piece a couple of years ago, I was riffing off of Steven Colbert's "You're On Notice" segment from The Daily Show, and was using a freely available generator on the internet to create my "on notice" boards. Unfortunately, however, that tool is no longer available, and I can't legally just use a picture of Steven Colbert anymore, so I have decided to lead off this column, instead, with a weekly indicator of my mood vis a vis our team (which, as always, is almost strictly based on wins and losses).

Therefore, when Georgia wins, you will see the following picture: 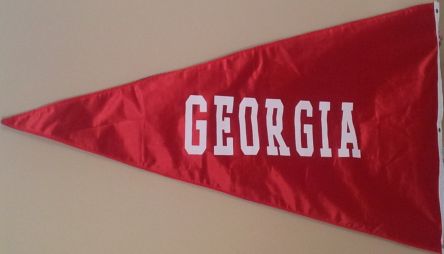 And if/when Georgia is bested on the gridiron, I will lead with the following picture: 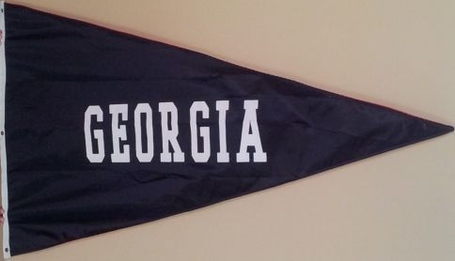 I could expound upon this further, but I think you get the picture. So, without further ado, I'm letting the following people know that, for Week 1, You're On Notice, Dawg!

1) Michael Adams - Why Michael Adams? Because he's a jerk, has stolen money from and is a disaster for University, and everybody that has ever worked with him hates him. Plus, I have it from a very authoritative source inside the UGA administration that he plans to declare war on Iran and use the resulting emergency powers he receives to name himself UGA President for life.

2) Malcolm Mitchell - There are many changes this year, both on offense and defense, but one of the most notable is Malcolm Mitchell's new role in the defensive backfield. Due to our suspension issues, the coaches have already said that Mitchell will most likely be playing almost exclusively on defense for the first two games. So, Malcolm, please don't get hurt, because I think we'll be needing you on offense again, soon, as well. (And I hope you get a lot of "receptions" this Saturday, if you know what I mean.)

3) The Running Backs - Boo Malcome has been named the starter for Saturday, but we all know that Todd Gurley and/or Keith Marshall will probably see significant playing time, as well. Even with the loss of Isaiah Crowell, I wouldn't exactly call our backfield "depleted," but they are woefully inexperienced as a group. We really need Gurley and Mitchell to step up and get some meaningful experience under their belt as they prepare to step into a raucous, hostile environment in their second game. Step up and make us proud, men. 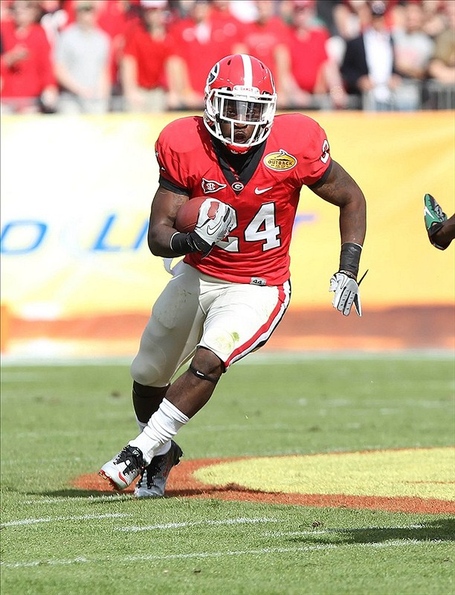 4) Mike Bobo - In spite of the fact that this is "just Buffalo," we can't let up on the reins after getting a 14-point lead, as Bobo seems to do far too often. We need to put these guys away hard and fast, and we don't need to let up until the clock says 0:00 at the end of the 4th quarter. We're going to have to play 60 full minutes in at least 11 of our 14 games this year, and we have some very inexperienced players at key positions on offense, so we need to make sure they understand what it means to play 60 minutes in the SEC. 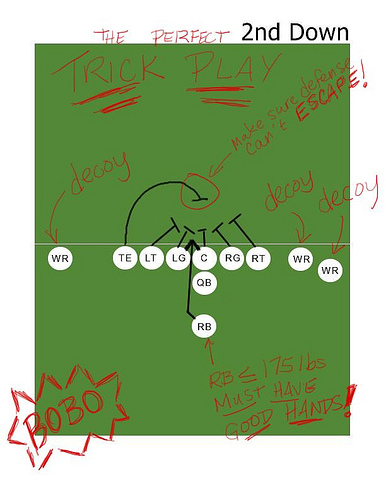 And I swear, if you run this play more than once per offensive possession, I'm going to slap the person sitting next to me in the stands. (No, not Mrs. Vineyarddawg. The person on the other side.) (via RedCrake)

5) Special Teams - It's not a stretch to say that our poor special teams play was a key factor in all 4 of our losses in 2011. We had the worst kickoff coverage in the SEC last year, and our All-American senior placekicker couldn't get out of his funk all year long. This year, we're starting true freshmen at both kicker (Marshall Morgan) and punter (Collin Barber), so we need you boys to hit the ground running. And I honestly don't know how we're going to fix the kickoff coverage, but we need to find a way to somehow do it. It probably won't cost us this game... but if we don't get our problems sorted out early, it could easily cost us game 2 and future games down the road.

6) The Offensive Line - This and special teams are our two primary areas of concern heading into the season. We have some good guys returning, most notably Kenarious Gates, whose experience as a junior will be most valued at the all-important Left Tackle spot. Unfortunately, it's his first year playing at that spot, having previously played at Guard. He's our man, though, and he's the anchor. We've also got a true freshman, John Theus, who is highly heralded, but just between you and me, I don't care how good an 18-year-old is... if we've got a freshman starting on the offensive line in the SEC, I'm going to be nervous. One thing's for sure, though... we can afford exactly zero injuries to this unit. Stay healthy, guys!

7) Fans from Buffalo - For those fans of the Bulls who are traveling from up in them Yankee-parts down to Athens for this game... well, welcome to the South. You'll find that we're a welcoming, generous folk who are only too willing to share our BBQ with you, just as long as you don't call the grills on which we also cook hamburgers and hot dogs "Barbecues." Also, if you bring along some of your namesake wings, we might get a good old-fashioned "cultural exchange" going, and we can all be better for the experience.

Fair warning, though... don't mention the war. And be willing to laugh along with us when we call you "Yankees" as a friendly jibe. Because we're not laughing "at" you, see... we're laughing "near" you. (You might also mention that Teddy Roosevelt was sworn in as President in your fair city... we southerners generally like the cut of his jib.) 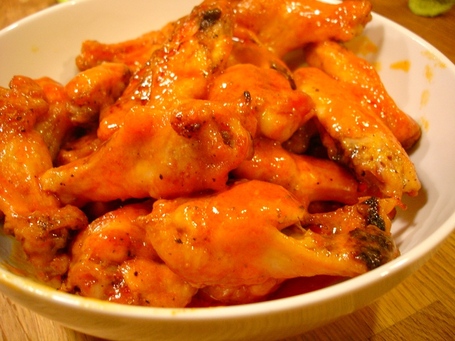 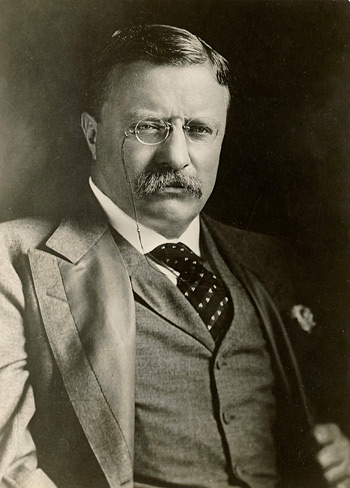 See, we do have some common ground here. (Via1, used with permission) and (Via2, public domain)

8) Students with Tickets - As we have seen in virtually every home game in recent memory, students almost never completely fill their allotted sections, especially for games against minnows like this one. I've heard many excuses and reasons for why this might be the case and the steps the administration could take to remedy the situation, but the bottom line is this: The student section comprises the only empty seats one can see on virtually every game day in Athens. Students, show up and support your team, or sell your ticket to another student who will!

Just six days until the Dawg kick off, my friends. And it might be the longest six days of the year. Is it Saturday yet?