Share All sharing options for: The Georgia Bulldogs and the Lessons to be Learned From Leafing Through Other Teams' Media Guides

As a result of my affiliation with SB Nation, I have joined the Football Writers Association of America, which is pretty cool. One of the perks of membership in the FWAA is that it gets me onto a few mailing lists I actually want to be on, and that means I sometimes receive the pleasant surprise of free stuff in my mailbox.

I would offer a disclaimer verifying that the pictures that follow were taken by me, but the fact that they’re badly composed, blurry, and sideways really ought to confirm for you that the photographer was me. Take a look: 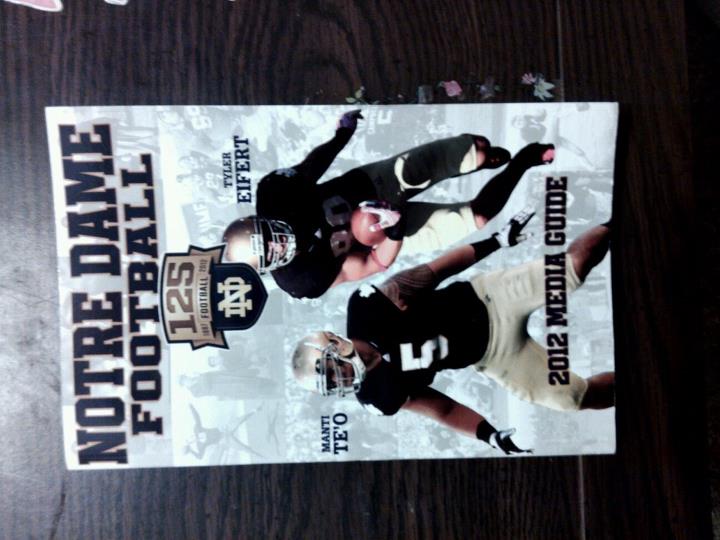 That’s right; Notre Dame sent me a Fighting Irish media guide. Clearly, everyone on the roster got one of these bad boys, because absolutely nothing in my profile would cause anyone to think, “You know who’d love a Notre Dame media guide? Kyle, that’s who!” Seriously, no one who’s reading this is currently thinking, “Dang it! Now I have to pick out a new Christmas gift for Kyle!”

Still, as noted above, free swag is free swag, so I sat down and leafed through the thing, and I give the Fighting Irish credit for one thing. Just inside the front cover, the Irish ask the rhetorical question, “What is Notre Dame football?” As you might expect, they answer that inquiry at length; viz.: 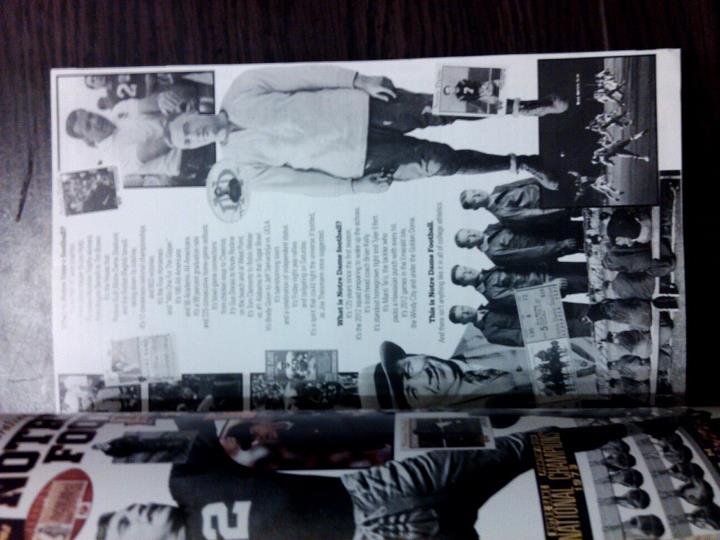 I know you can’t read that, but I did, and, yeah, it goes on about the House that Rockne Built and the Rocket and the Gipper and the Four Horsemen . . . but, surprisingly, it does not mention Rudy! Inasmuch as I am no fan of that shameless self-promoter who last year reportedly agreed to pay almost $400,000 to settle charges brought by the Securities and Exchange Commission, so I applaud the Fighting Irish for not abetting Daniel Ruettiger in his constant efforts to convince everyone that a walk-on making a tackle in a college football game is somehow uncommon, much less inspirational. Good on you, Notre Dame.

Of course, the Fighting Irish media guide also touts the program’s past and present laurels, noting that, over the long course of Division I-A college football’s storied history, Notre Dame has compiled the sport’s second-best winning percentage (.731) and third-highest victory tally (853). The charts contained in the media guide list the top 20 teams in both categories . . . and, son of a gun, there are the Georgia Bulldogs, sitting right there at 14th in winning percentage (.645) and at tenth in total victories (747).

Notre Dame wasn’t the only school to send me a media guide, though. I also received one from the Sooners: 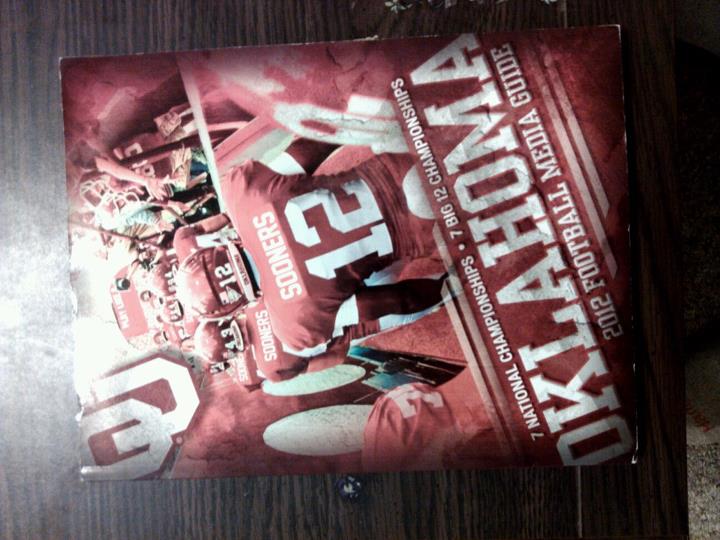 Oklahoma, of course, likes to brag on such past coaches as Bud Wilkinson and Barry Switzer, as well as on current head coach Bob Stoops. In recounting the Sooners’ accolades, the OU media guide also makes mention of the ‘Dawgs. For instance, the Sooners run down the country’s top teams in postseason winning percentage among perennial bowl invitees. Sure enough, there in fifth place, right behind Southern California (.674), Penn State (.636), Oklahoma (.611), and Alabama (.595), is Georgia (.585).

The Sooners go on to point out that, among active coaches with at least a decade of experience at the top of the organizational chart, Coach Stoops leads the nation in winning percentage (.803), followed by Texas Christian’s Gary Patterson (.784) and, in a third-place tie, Notre Dame’s Brian Kelly and Georgia’s Mark Richt (.736). Maybe Stewart Mandel and Pat Forde are selling the Bulldogs and their head coach a bit short, seeing as how Coach Richt and the Red and Black keep showing up on all these lists of powerhouses.

Finally, though it has nothing directly to do with Georgia, there is this: 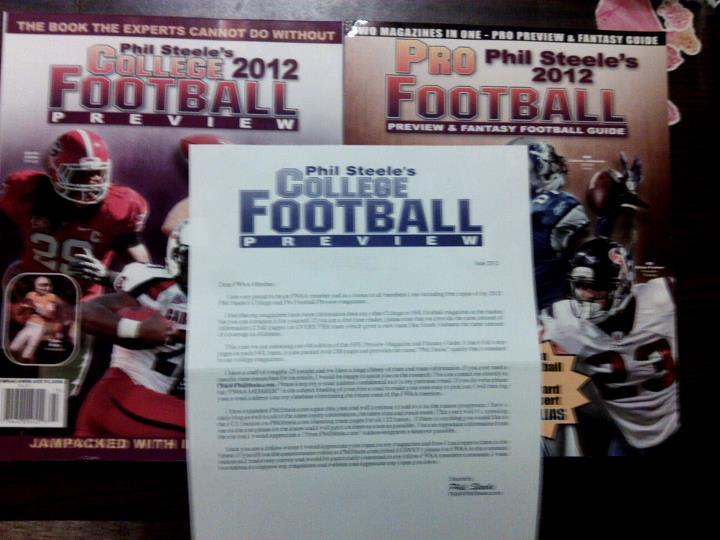 Yep; Phil Steele sends FWAA members two complimentary preview magazines and a form letter! You have no idea how good I felt about myself as a person the day that package arrived. Still, I feel even better knowing that my head coach and my football team measure up so well to the top-tier skippers and programs in the sport.