Share All sharing options for: 2012 Season Preview: The Auburn Tigers

To date, there have been nine excellently written and finely crafted season previews of Georgia's 2012 opponents. I'm here to break that trend. I present a brief overview of the Auburn Tigers, our opponent on November 10th in Jordan-Hare Stadium. Last season was our 5th victory in the last six meetings. Auburn is always a big, big game for both teams no matter the record because, quite simply, familiarity breeds contempt. This game means a great deal to both fan bases. I'm not sure if I've ever stated this before, but let I'd like to go on the record: I hate Auburn.

First, a brief bit of history: The Deep South’s oldest rivalry was actually first played in a bog only a few hundred yards over the Alabama state line; the year was 1794. Times were stressful, as news of the great Whiskey Rebellion had many on edge, especially in college towns across the south land. Some say football was born out of rebellion. At any rate, Georgia tied Auburn (which was actually a biker club in 1794. School officially founded in 1856) as both teams slogged and spit their way to a scoreless draw that was considered an upset as Auburn was using illegal, yet experienced and talented British ex-prisoners of war in their kicking game and kicking the "football" was actually the only form of offense (or defense) during this era. Auburn University’s long tradition of malfeasance began long, long before the 1950s. Today's game is a bit more fast paced, and the state of the rivalry has never been more intense. We recruit our kids, they recruit our kids and we meet every year in an annual grudge-match. Good times.

Gene Chizik was the head coach at Iowa State, compiling a 5-19 record before coming to The Plains. The eventual decision to replace Tommy Tuberville, who had some success (including 6 straight against Alabama), was met with mild skepticism which was quickly quelled when Auburn won the National Championship in year 2 of his tenure, behind Heisman Trophy winner and semi-pro All Star Cam Newton in 2010. However, Auburn took a significant step backwards mainly due to attrition in 2011 and struggled against SEC competition in most phases of the game. 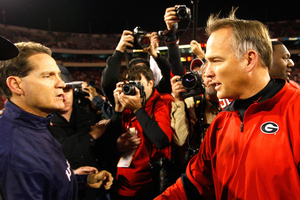 Mark Richt has acquitted himself quite well against Auburn,
with a 7-4 record and 5 out of the last 6.

Defensively, The Tigers had the 81st ranked defense in the nation last season. The Plainsmen (see, there's that ambiguous mascot thing again) should be improved if for no other reason than the Brian Van Gorder hire. For all of his wandering ways, he's a good coach and will maximize his players' potential. However, change doesn't necessarily translate into immediate success, but Van Gorder certainly has talent to work with, including defensive end Corey Lemonier. Auburn should hold their opponents overall scoring averages down from last season's 28.92 points-per-game (30.75 ppg in the SEC).

The offense is now under new Coordinator Scott Loeffler, who traveled south from Philadelphia (Temple), to replace Gus Malzahn. Auburn averaged 25.7 points-per-game last season, and only averaged 20 per game against SEC opponents. Quarterback Kiehl Frazier (sophomore) will get the nod and must improve upon an abysmal 105th best passing offense from a season ago. Michael Dyer won't be suiting up for anyone in 2012, but Auburn always seems to have quality running backs in the pipeline. Onterio McCalebb, though small, can get to the edge. Tre Mason and Corey Grant will play as well. Philip Lutzenkirchen (an 8th years senior, I believe) is one of the better tight ends in the nation. Auburn's special teams will be solid with kicker Cody Park, punter Steven Clark and return specialist Tre Mason all returning from a strong 2011 squad.

Auburn's schedule is going to be tough. The cyclical state of the SEC right now still skews most of the power towards the Western Division. The first 5 games of the season will tell us much:

There are some off-field issues that are in the process of being resolved at the moment. Is any of this a distraction? Time (or the NCAA) will tell, YMMV. Auburn gets a rematch with Clemson in Atlanta to start things off and this should be a barometer/thermometer indication of how the season could play out. They have a tough test at Mississippi State in Starkville the very next week, and an 0-2 start is a real possibility which could rock the boat just a little. If Auburn can get steady play from their quarterback and keep the scoring down (they allowed 30 points or more 7 times last year), they have a shot at another decent bowl game and perhaps could upset someone like they did last season against South Carolina. Auburn is still a year or two away from really contending in the SEC West and breaking through.