Chuckdawg wrote a piece about making Russ a full-time mascot due to his stellar services to Bulldog Nation, so I figured that I may as well throw in my support as well. William Shakespeare is known for...okay, so I could take all day with that list, but many people who do recitations often choose Shakespearian soliloquies. Some of you will read this poem, recognize the original soliloquy from King Lear, and say, "But it's given by Edmund the bastard, who tries to usurp his brother's place through murder, deception, and treachery." True, the similarities between Edmund and Russ do not extend to all areas of their respective lives, but they were both denied certain things due to circumstances beyond their control. I also know that Russ is not illegitimate and is a valid part of the UGA bloodline, so it's not like he's a nobody.

This posting also features a special guest appearance by a man who does not always make public appearances but who believes in doing what's necessary for his people. He is often misunderstood, and can be both loved and loathed for his style of justice. T. Kyle lamented that this cooler, catchier moniker did not catch on with the public, and I quite agree. I think this man would endorse Russ for official mascot and would laud Russ for...well, you'll just have to see the photo caption.

Thou, college, art my goddess; to thy law

My services are bound. Wherefore should I

Stand in the plague of custom, and permit

The prejudices of breeders to deprive me,

For that I am some twelve or fourteen moon-shines

Lag of an Uga? Why blotchy? Wherefore blotched?

When my dimensions are as well compact,

My hind as generous, and my shape as true,

As honest bitch's issue? Why brand they me

Who, in the lusty stealth of nature, take

Than doth, within a dull, stale, tired cage,

Go to creating a whole litter of pups,

Got 'tween asleep and wake? Well, then,

Legitimate Uga, I must have your ice:

Our fandom's love is to the blotchéd Russ dawg.

As to the legitimate: fine word,--legitimate!

Well, my legitimate, if this poem speed,

Shall top the legitimate. I growl; I prosper: 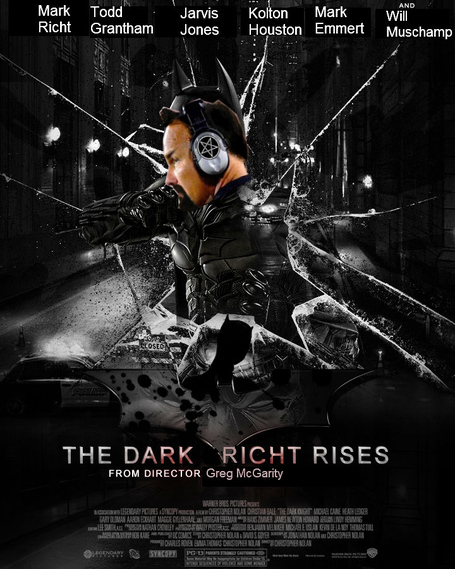 Dark Richt thinks that Russ is not the mascot the Bulldog Nation deserves but the mascot it needs. He also doesn't care for the NCAA, is good at dealing with enemies who have creepy faces, and likes driving his truck batmobile.