Barometer or Thermometer? A Look Ahead to Week 1

Share All sharing options for: Barometer or Thermometer? A Look Ahead to Week 1

As we near the beginning of the 2012 College Football Season, I thought it would be fun to pick some of the more interesting matchups to gauge whether (weather?) or not these games meet the criteria for the following:

Barometer game - A game that generally provides a feel for where a program is at the present time. The irony here is that a barometer actually measures pressure, but I think you're catching my drift.

Thermometer game - Lose this game, and the temperature for the head coach goes up just a notch. For some, an early loss is tenable, but uncomfortable. For others, it's potentially Krakatoa hot. A victory will cool the proverbial "hot seat", if just for the moment.

I've added a prediction here 'n there just for kicks, but as Kyle likes to so fondly say, don't bet on it! Really. I bought Facebook stock. That was as solid a pick as Auburn vs. South Carolina last season. I'm hopeless when it comes to money and stuff. I did find the right girl, though...


Steve Spurrier and his 'Cocks begin the '12 campaign against James "Hulka" Franklin and his Commodores in beautiful living SEC East color on a Thursday Night in Nashville. Right off the bat, this really is a significant game as it relates to what is expected to be a two-team race for the Eastern Division crown, and was tailor-made for about a 12,000-comment game day night thread, complete with snark and circumstance. Thursday nights and USCe go together like peas and carrots.

Neither coach is remotely anywhere close to being on the hot-seat, but this game will reveal much. I do feel that there is a modicum of pressure on Spurrier in terms of winning an SEC Championship as his window of opportunity may be closing and he's probably got Marcus Lattimore on his sideline for just one more season. How much of a drop-off will Vandy have after their 6-7 campaign from a season ago? Will Lattimore be at full-speed? Alshon Jeffrey is in the League now, and replacing Ellis Johnson, the former Gamecock defensive coordinator, could prove to be tall order as the season progresses. Carolina should win this game, pulling away late...but Vandy has a history of giving the Gamecocks fits. We'll find out a little bit about both programs.

I don't know much about N.C. State, but did a little bit of research. I've come to a conclusion, shared by more than a few, that they are not a bad football team. In fact, they might be sleeper good in the ACC this season. They finished 8-5 last season, going 4-1 down the stretch including a victory over Clemson and eventually Louisville in the Belk Bowl. They have some talent, particularly at quarterback in the 6' 11" (in pumps) Mike Glennon. They can run the ball. Tom O'Brien is in his 6th season and seems on solid footing in Raleigh.

Then, there's Tennessee. A win against the Wolfpack buys Derek Dooley exactly 6 days of Hot Seat reprieve. A loss might just be the beginning of a sooner-than-later end. Tennessee should be improved, but improvement is relative here (kind of like humidity). Will it be good enough after yet another dismal season in Knoxville? Patience is already thin for a coach who wasn't the first choice on the Cumberland Plateau in the first place. When we last left the Vols, they got beat by a bad Kentucky team. Tennessee has an NFL caliber QB (and world-class jet skier) in Tyler "Spray" Bray, along with some stud wideouts. Tennessee has more returning starters on both sides of the ball than anyone because they had to play folks. I just don't think they can run the ball, and you have to run the ball on the road. This should be a close game. Somehow, I think Precious prevails, although the Vols haven't won in the Dome in the last 5 tries.

Verdict: Thermometer. A very large one.

Michigan State can play defense, at least at times, especially against the run. Boise State probably won't try to run much. My interest lies in how well Joe Southwick, Jr. performs, as he replaces the extremely goofy talented Kellen Moore. Boise is only returning 7 starters, so they will be fielding a young team. Chris Petersen is a diety up there in potato land. Mark Dantonio seems to be on the right track heading into his 6th season in East Lansing. Boise doesn't have the horses in this season's opener in Spartans Stadium, but they did just open another Chik-Fil-A up there. I hear the waffle fries are some kind of super-freaky special for some reason. Hey, Boise fans. Send us some video. Of the fries. Hold the hamster...

I'll have an in-depth look at the Auburn Tigers in a few days. I hate Auburn. This game will be intriguing. Clemson wants to atone for getting hammerschlonged by West Virginia in last year's embarrassing 70-33 drubbing. I know Dabo Swinney is recruiting lights-out up in Pickens County, but this game could set the tone if Auburn were to stomp 'em. I doubt this scenario plays out. Auburn has talent, they always will. But their quarterback situation might take a half-season to get resolved if it does at all. Their pourous defense should be improved, but Clemson can be explosive, although Sammy Watkins is suspended for this one. This game will reveal much and could go either way in the ol' weather implement department. If Clemson loses, it could place considerable doubt in the collective minds of a team that has been trying to overcome the bitter aftertaste of their bowl debacle. Pressure on Dabo. If Auburn loses at home, Chizik will begin to hear it because Cam Newton ain't coming back no matter how much money they throw at him. Clemson wins this game.

Michigan is ascending. 'Bama is steady or, perhaps, slightly down as some issues in their defensive backfield have cropped up. Michigan went 11-2 last season, including a 23-20 OT victory over Virginia Tech in the Sugar Bowl. Alabama avenged an earlier loss to LSU in the BCS National Championship game and folks all over Tuscaloosa are still wearing Iowa State jerseys. Michigan has a dynamic playmaker at quarterback in Denard Robinson while 'Bama returns the steady A.J. McCarron. There are absolutely no Hot Seat issues here, folks. This is, however, the consummate barometer game because we are going to find out right-quick the state of Wolverine and Crimson Tide Nation. I'm going for the upset here. Michigan scoops up a late fumble, rumbles towards payturf, and an Alabama player on the sidelines tackles him. Cowboy's stadium will sit in stunned silence as the refs award Big Blue the touchdown and Paul Finebaum spontaneously combusts on live-radio right after Tammy professes her love.

Alabama has a history of doing some weird, wild stuff when they play in Dallas....

Thank God Paul Johnson is a pure genius because I would really have trouble picking this game. He's a founding member of Mensa and is on the Board of Directors at Zima, having recently left Bartles and Jaymes.

Poor ol' Frank Beamer. This guy just wins, but will be running into a buzzsaw in a nationally televised Labor Day game. It'll be embarrassing because Tech has a secret weapon that not even the great Bud Foster has ever dealt with: Virgin Receivers. Yep, Tech's receivers have never been touched (by the football). It's the next big thing. 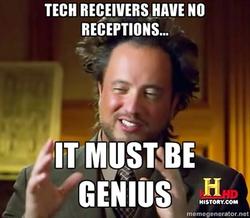 The triple option is a nerve wracking offense to defend, but often takes a game or two to get totally in-sync. Virginia Tech is, as always, a contender in the ACC and will squish the bugs. Beamer and Foster are as good a pair of coaches as you'll find anywhere.

Could this be the beginning of a Paul Johnson Hot Seat trend? Probably not, because the bar ain't set real high over on North Avenue. On the other hand, once we handle 'em again in November things might start to heat up.

So, there you have it. Thoughts, opinions, donations....all welcome. Go Dawgs!

P.S. - Notre Dame and Navy are playing at 9 in the A.M. (in Dublin, Georgia Ireland). Notre Dame is Swahili for "I don't care."

*Edit - It's a trick question because it's indoors (I think I knew that. h/t Auditdawg)