We've seen previews for Georgia's first seven games. And now, Dawg Sports' preview of the 2012 season continues with our snapshot of Hate Week. On October 27, dang near half a million people will descend upon Jacksonville, Florida. Half of them will be Georgia fans, and half of them will be Gator-lovers. Only about 84,000 will have (non-counterfeit) tickets, but don't bother me with facts, son. We're here for the World's Largest Outdoor Cocktail Party, and whether you want to call it that or not, a knockdown, drag-out party will be had, and it will boggle the mind of all those in attendance.

Georgia-Florida isn't just a party, and it isn't just a game; it is a happening. It is an event unto itself. One team could be 7-0, and the other team could be 0-7, and you'd still get hundreds of thousands of people gathering to party and bark/chomp at every opposing fan who ambles/stumbles past. Some people like to take their small children to games with them, but unless your kid is Baby Herman, I don't recommend bringing them to this one. It's gonna be nasty, and it's gonna be crazy.

This is hate. This is passion. This is a party unlike any other. This is Georgia-Florida. 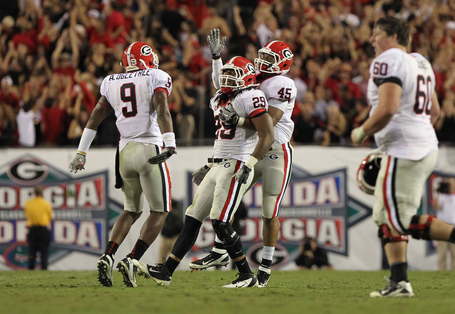 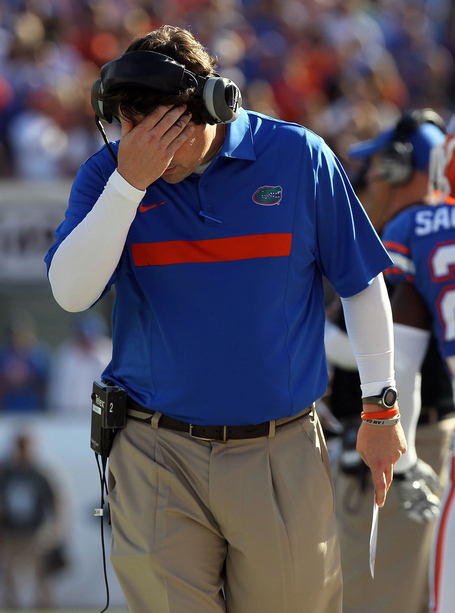 When we see Larry strike this pose, it means that our man is on the job in north-central Florida. (Photo credit: Kim Klement-US Presswire)

Mascot: Albert E. Gator, pictured at this link. (I don't have permssion to post it here, but it's great, and better than any MSPaint drawing I could possibly do.)

SB Nation Affiliate: Alligator Army, whose editorial staff are actually a good group of folks, despite being handicapped by being forced to cheer for a university that sucks.

The only good kind of alligator: A dead one

Offense: Ok, so you want evidence that Coach Larry is a secret agent sent by the University of Georgia to destroy the Gators' football program? Well, first, he hired Charlie Weis as his offensive coordinator. And now that Weis has split to take over the reins at the prestigious University of Kansas, he's decided to name a side of beef as one of his (apparently two) starting quarterbacks. You know... Jacoby Brisket.

With Brent Pease as the new OC, though, maybe Coach Larry was just trying to add an entree to the offensive menu. You don't want to overload on those starchy sides, you know. 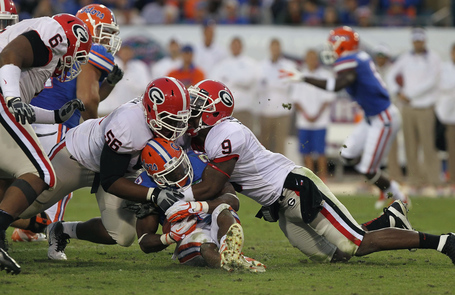 Jeff Demps won't be back this year, though... too bad, really. (Photo credit: Kim Klement-US Presswire)

Defense: We all know that Coach Larry is, essentially, his own defensive coordinator, and many folks expect his defense, now in year two of the new system, to be significantly better than last year. I don't doubt that to be true, but it wouldn't surprise me if they suffer a surprisingly timely "poor game" in Jacksonville. Secret Agent "Muschomp" strikes again! 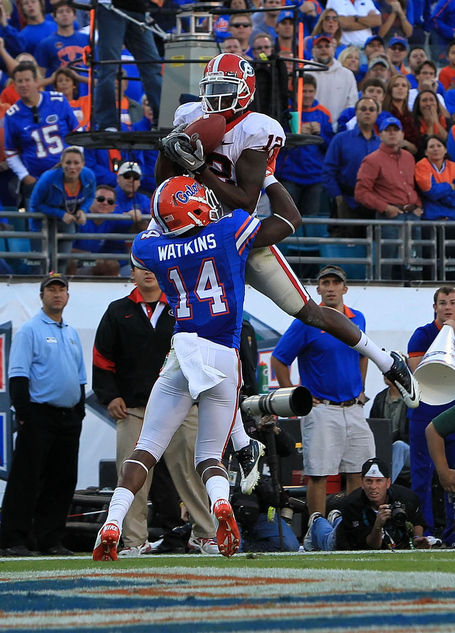 Special Teams: I'm sorry. Nothing about Florida's team is special.

Preseason prediction by SEC journalists who are almost never* wrong: 3rd in the SEC East

Vineyarddawg's prediction: In a repeat of the 1942 matchup, Georgia defeats Florida 75-0. Also, we got Early Cuyler, so that has to count for something, too.

Finally, my friends, no post about the Florida Gators would be complete without a tip of the cap to the Gators' #1 fan, Representative Corrine Brown. Congresswoman Brown, I yield the floor to you: