Share All sharing options for: Georgia Bulldogs 2012 Olympic Update: Schmitt and Vreeland in the 4x200m Free Relay; Isner Plays On 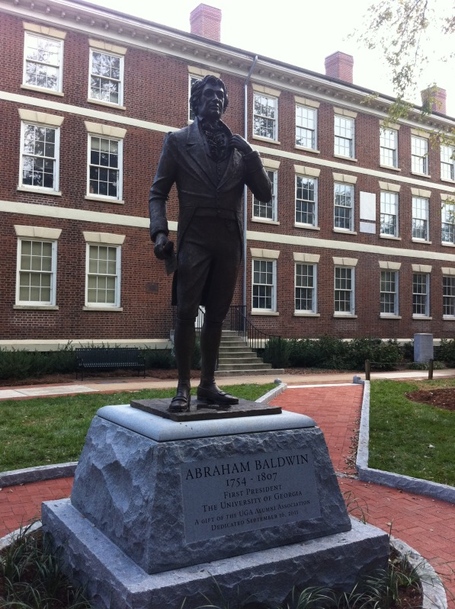 The above photograph is from the author's personal collection and, in addition to keeping us safe from the horrors of copyright infringement, represents pride in both the United States of America and the University of Georgia.*

Mindful that some folks may not want results of today's Olympic events disclosed before they watch them live tonight on delayed broadcast, I bring you this update with UGA-related Olympic results below the fold.

Well, Schmitt, I reckon. University of Georgia swimmer Allison Schmitt added to her Olympic medal collection by winning gold with fellow Bulldog Shannon Vreeland in the 4x200-meter freestyle relay. With Vreeland and Schmitt swimming in the third and anchor positions, respectively, the United States team set an Olympic record, clocking in at 7:42.92. ESSSEEEECEEE SPEEEEEEEED!

This was Schmitt's fourth medal at the 2012 games in four tries, and makes her solely or partly responsible for UGA's entire medal count so far. Including Vreeland's gold in this event, the Bulldogs are at 5 medals, tied with Florida in the SEC medal count (compared to everyone else's 0), and ahead of all but 14 of the 49 countries whose athletes have been awarded medals in the London games.

In the same 4x200m free relay, incoming UGA freshman Brittany MacLean helped Canada to a fourth-place finish in the field of eight.

In other Olympics news, tennis giant among men John Isner advanced to the men's singles quarterfinals by defeating higher-world-ranked and higher-seeded Janko Tipsarevic of Serbia 7-5, 7-6 (14). That second set lasted just shy of an hour, but Johnny said pfffft, that's nothin'.

Isner will face some Swiss guy the number-one player in the world and 2012 Olympiad number-one seed Roger Federer tomorrow at around noon or so, depending on weather and the length of prior matches. The last time Isner and Federer met in international competition as representatives of the United States and Switzerland, respectively, the American Dawg won. Just sayin'.

And in parting, I'll add an observation I made last night on The Facebook: didn't the ladies of the US women's gymnastics team look good in red? It's about time some of those girls started thinking about higher education, and I know a great place for them.