It's been a while since our last update on May 20, so we've got a lot of things to cover. 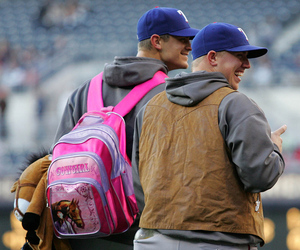 For starters, that guy up above is Justin Grimm, drafted by the Rangers in the 5th round in 2010. Texas called him up to make his major league debut on June 16, when he pitched 6 strong innings against Houston. He was roughed up by Detroit in his next start, and had a 3 inning outing out of the bullpen in a blowout loss to Chicago on Tuesday the 3rd. But as the new kid on the block, Grimm is relegated to goodie bag duty. This is a common MLB practice where the youngest member of the pitching staff (or bullpen) has to carry a bag filled with their candy and other needs during the long nights of a baseball game. Being pranksters and hazers as they are, this is often done in a young girls' backpack (the Braves have had a Hannah Montana and My Little Pony in recent years). So considering his lack of use lately, and poor outings in 2 of his 3 appearances, Grimm will likely be returning to AA Frisco soon where he was before getting called up, or perhaps to their AAA club.

Wood made his debut last Monday with Atlanta's A Ball affiliate, the Rome Braves, which speaks highly of their opinion of the rookie in that he skipped their rookie levels. He's shown why they felt so highly of their second round draft pick, going 5 innings in his two starts so far, allowing just 3 hits, to go with 5 strikeouts, no walks, and no runs. He is scheduled to make his 3rd professional start today.

Levi Hyams, the Braves' 19th round pick in this June's draft, has been starting at 2B for the higher rookie level team in Danville of the Appalachian League. He's had some good moments (like 3 straight games with a HR last week) and some bad ones too (a .229 batting average, and obp below .300 through 12 games so far). While Woods may be on a fast track for Atlanta in the next few years, Hyams is likely to have to toil around the lower levels of the minors unless he can unexpectedly break out. Such is life as a 19th round draft pick in the minor leagues.

We begin our review of the other big league Dawgs with the fan favorite, Gordon Beckham. Beckham has a pair of 3 hit performances in his last 10 games, but he's still struggling at the plate. His White Sox currently sit atop their division of the AL Central, and Beckham has at least improved over last year's #s. He's hitting .248, with 9 HR, compared to .230 and 10 HR all of last year. His on base is still low thanks to an awful April, but in May and June, Beckham improved his numbers considerably posting a .744 ops in both months.

Mitchell Boggs has been arguably the best Diamond Dawg in baseball all year, and has continued his dominance in the St. Louis Cardinals' bullpen. On the season, he has a 2.02 ERA, and allowed only 38 batters to reach base in slightly less than 36 innings. Pitching in 12 games in June, the Dalton native allowed 3 runs on 10 hits, striking out 6 and walking none.

Parkview grad Jeff Keppinger is having a strong season in a utility man role for the Tampa Rays. He's hitting .317 on the season, and has struck out just 8 times in his 40 games played. Playing mostly 2B, Kepp is not a full time starter, but is getting plenty of action.

Clint Sammons, another of several former Parkview players who went through Athens on their ways to professional baseball, is having a horrific season at the plate for the Miami Marlins' AAA affiliate. The New Orleans Zephyrs backstop is hitting a mere .188 on the year, and is reaching base in fewer than 22% of his trips to the plate (.219 obp) June was his worst month yet, hitting a mere .163, with an obp of .157 (not a typo, he failed to draw a walk the entire month, and must have had a sacrifice), but thankfully he's not there for his bat but for his immense defensive ability.

Toledo Mudhen Brooks Brown has been going through somes ups and downs for the Detroit Tigers' AAA club. After seeing action mostly out of the bullpen in May, he spent most of June starting 4 of his 5 outings. He got hit hard by Durham on the 10th, but his 3 other starts saw him go 6 innings, allowing 2 or fewer runs in each. The right hander from Statesboro had an awful 4th of July, allowing 5 runs on 10 hits to Columbus last night, pushing his ERA for the year back over 5 to 5.03.

Former lockdown closer and first round pick Josh Fields had himself a solid June with just 2 bad appearances out of 8 for the month, including an extended 3 2/3 inning outing on the 26th which saw him give up 0 runs, and 0 hits as well as just 1 walk to 4 strikeouts. For the year, Fields has a 3.45 ERA and 4 saves in 25 games, striking out 42 over 31 1/3 innings to just 14 walks in AA for the Boston Red Sox.

Off the field, thoughts go out to Stephen Dodson, who is pitching for the Colorado Rockies' AAA team in Colorado Springs, which is where wild fires have been raging doing extensive damage. In 9 June relief appearances, Dodson allowed 6 runs in 12 2/3 innings.

Jackson Generals 1B Rich Poythress missed all of June injured, returning to action just this week. In 3 games since coming back from the disabled list for Seattle's AA club, the former Augusta area prep star has 3 hits and a walk.

Trevor Holder started 5 June games for the Potomac Nationals in the high A Carolina League, going 3-1 with a 2.16 ERA over 33 1/3 innings. He allowed 2 or fewer earned runs in all 5 starts.

C Bryce Massanari of the Modesto Nuts, the high A California League affiliate for Colorado, is on the disabled list having not seen action since May 20.

Recently promoted Jeffrey Walters is now a member of the high A St. Lucie Mets in the Florida State League, following a strong early half with the New York Mets' club in Savannah. After posting an 0.95 ERA for the Sand Gnats, Walters made his first appearance with St. Lucie on June 21st. He has made 5 appearances out of their bullpen so far including 1 strikeout and nothing else in an inning and two-thirds yesterday, allowing only 4 hits, 0 runs, and 0 walks with 5 strikeouts in over 7 innings. Congratulations to Walters on his climb up the ladder.

Zach Cone is another dinged up Dawg, having been on the disabled list since last playing on June 17th. The supplemental first round pick last year by Texas had gotten a hit in 7 of his previous 10 games before getting hurt. On the season, he has hit .270, with 10 HR, 6 steals, a .328 obp and .472 slugging for the Hickory Crawdads.

Chase Davidson, the big 1B from Alpharetta, started his season late last month, joining the Tri-City Valley Cats of the New York-Penn League in the Houston organization. The NY-Penn league is for more advanced rookies, and players in their second or third season, such as Davidson who was drafted by the Astros. After crushing with Greenville of the rookie ball Appalachian League last year, Davidson is still knocking off the rust this year with only 5 hits (1 2B, and 1 HR) to go with 9 strikeouts in 9 games so far. 3 of those hits came in a single outing on June 21, where he went 3-4 with a 2B, an RBI, and a run scored against Vermont.

Berry Tanner, the Waycross native who went by Cecil as a Diamond Dawg, is a part of the active roster, but has yet to make an appearance in 11 games for the Arizona League affiliate of the Oakland A's.

As always, any updates, missing info, corrections, or critique, are welcome in the comments.