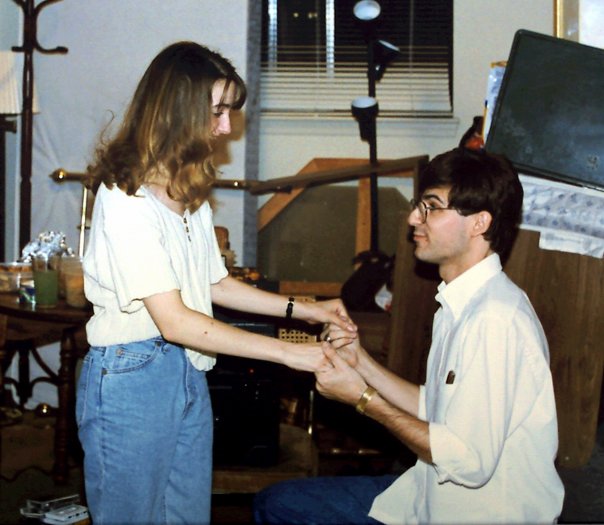 This photograph of me proposing to my wife 16 years ago has nothing whatsoever to do with this posting, but, in order to avoid running the risk of copyright infringement, I am using it instead of one that is more relevant. Damn laws. (Credit: A guy with whom I went to college.)

While we patiently await the arrival of college football season, the 2012 London Olympic Games stand alone as the centerpiece of sports in the world. Unfortunately, the hated Gators lead the medal count, but this is only because Florida counts an athlete who transferred out of Gainesville following her freshman year and another who never attended the University of Florida, and because some commentators have downgraded the Red and Black’s figures from an original tally that correctly included Amanda Weir. Granted, Ryan Lochte counts for the Orange and Blue, but he only went to the Olympics to hook up with chicks. (No, seriously, he did, and he basically says so.)

In any case, Bulldog Nation is well represented in London, and here is what Red and Black athletes have done lately to distinguish themselves:

Thus far, of course, the standout Olympic performer for the Georgia Bulldogs has been rising senior Allison Schmitt of the women’s swimming squad. After anchoring the U.S. bronze medal-winning 4x100-meter freestyle relay team, Schmitt singlehandedly captured the silver medal in the 400-meter freestyle, setting an American record in the process. Schmitt’s second-place 4:01.77 time broke the previous U.S. ladies’ mark of 4:02.20 established in 2008. She followed that up by claiming a spot in Tuesday’s 200-meter freestyle finals, earning the second seed in an event in which she already is the American record-holder.

Excelling on the court as well as in the pool, the Classic City Canines sent a tennis Olympian to the round of 16, as John Isner dispatched Tunisian Malek Jaziri, 7-6(1), 6-2. The four-time Bulldog All-American is slated to face Serbian Janko Tipsarevic on Wednesday.

In women’s gymnastics, entering freshman Gym Dog Brittany Rogers helped earn her native Canada passage to the team finals. 2012 marks just the second Olympiad at which the Canadian ladies have reached the finals in this event, and the first since the boycott-diminished 1984 Olympics in Los Angeles.