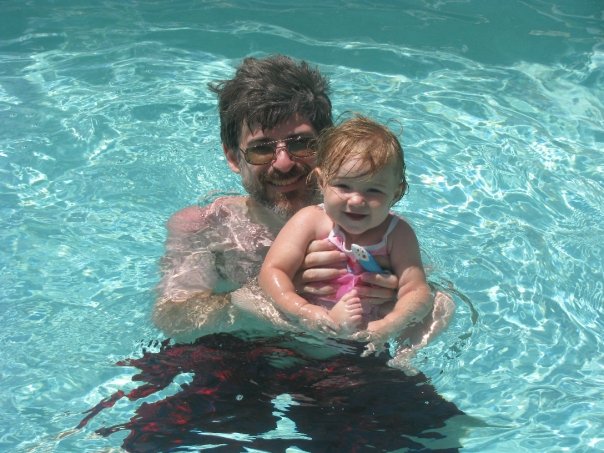 This photograph of me holding my daughter in a swimming pool has nothing whatsoever to do with this posting, but, in order to avoid running the risk of copyright infringement, I am using it instead of one that is more relevant. Damn laws. (Credit: My brother-in-law, whose permission to use this photo I did not ask, but who cannot sue me, because I’m his lawyer.)

You’ve already been briefed on the Buffalo Bulls by Spears and informed about the Missouri Tigers by chuckdawg, but, if there is one game Bulldog Nation has circled on the calendar, it is the Georgia Bulldogs’ September 15 date with the Florida Atlantic Owls between the hedges for a contest so monumental, kickoff time was moved to 7:30 p.m. Eastern to accommodate a CSS television audience. Here is the 411 on FAU:

What Will Make You Bark and High-Five Those Around You: How about a shot at a shutout? Last year, out of 120 Division I-A teams, the Owls ranked 108th in rushing offense, 111th in passing offense, 119th in scoring offense, and 120th in total offense. This year, they will be installing a completely new offensive scheme, and they likely will be led by a new quarterback. Returning signal caller Graham Wilbert---whose 2011 stat line included 15 interceptions, eleven of which came after intermission, and seven of which were thrown on first down---probably will be sidelined in favor of Pearl River Community College transfer Melvin German, who should report to campus in time for FAU’s first position meeting tomorrow. In short, Florida Atlantic will be fielding a new quarterback in a new system in the initial stages of an effort to revamp what literally may have been the worst offense in the country last year. German can forget it when Todd Grantham’s defense gets rolling.

What Will Make You Curse and Kick Objects in Your Vicinity: Two of the Owls’ linebackers, David Hinds and Randell Johnson, received preseason all-conference honors, and their new position coach, Jovan Dewitt, spent the previous three years as the defensive coordinator at Northern Iowa. The linebacker corps figures to be a strength for an FAU D that brings back eight starters, so don’t be surprised if the Georgia O encounters tougher sledding than expected, particularly in the highly likely event that Mike Bobo calls a plain vanilla game. Raw talent will enable the Bulldogs to win comfortably in the end, but the chess match between the Red and Black offense and the Blue and Red defense is liable to be frustratingly even for the first quarter and a half.

Where We Should Dominate: Though Florida Atlantic is switching to the spread, Carl Pelini is not interested in installing a pass-happy offense, and new offensive coordinator Brian Wright’s 2011 Montana State attack averaged more rushing than passing yards per game. Last year’s anemic Owl offense was more adept at the ground game than at an aerial assault, anyway, but there is a problem: FAU rushed more than 32 times a game last autumn, tallying ten rushing touchdowns and collecting over 105 yards per game by way of the run. Unfortunately for the Floridians, running back Alfred Morris accounted for 99 yards per game, 19.5 carries per contest, and 90 per cent of the Owls’ rushing TDs. Morris was a senior in 2011, and his understudy, Xavier Stinson, saw little action last season, averaging 2.5 yards per carry, touching the ball fewer than three times per game, and failing to break the plane of the goal line with the pigskin in tow even once. Coach Pelini and Coach Wright want to get the ground game going, but, if there’s no one to run through, there’s nowhere to hide.

Where We May Struggle: Two stats from last season that leapt out at me were these: FAU finished 82nd in the country in tackles for loss allowed and 101st in sacks surrendered. That had me happily envisioning Jarvis Jones teeing off on the Owls, until I paused to recall that, in 2011, Georgia finished 97th in the country in quarterback takedowns permitted, and that nine current SEC squads, including the Bulldogs, ended up behind Florida Atlantic in TFL tallied against them. Don’t expect the Red and Black offense to put on a 60-minute clinic . . . and don’t forget that, in the so-called Loveliest Village last fall, the Owls led the Auburn Tigers in first downs (20-16), passing yards (199-178), and time of possession (33:46-26:14) while trailing by eight in total yards and by 16 in total points. Expect the visitors to make a game of it for longer than any of us would like.

Where We Will Worry Needlessly: This game will be played one week after the ‘Dawgs travel to Columbia, Mo., so much will be made in the media of the long road trip seven days before, offered with ominous comparisons to the 2008 season, in which a successful trek to the desert to face the Arizona State Sun Devils was followed by a debacle against the Alabama Crimson Tide the following week. Don’t buy that hype; Georgia’s trip to Stillwater, Okla., in 2009 didn’t prevent the Classic City Canines from taking down the South Carolina Gamecocks seven days subsequently, nor did a demoralizing defeat in Boulder, Colo., in 2010 keep the Bulldogs from thumping the Tennessee Volunteers on the ensuing Saturday. Focus past the possibility of a hangover after a road trip.

Where We Have an Opportunity to Get Truly Nasty: Vinny Zaccario, who may or may not have been played by Joe Pesci in a popular motion picture comedy about a New York lawyer trying a case in the South, is basically the only guy back for the FIU special teams. Record-setting punter Mickey Groody is gone, and sophomore Marcelo Bonani was the only punter listed in the spring. I trust our defense, I don’t trust our offense, and Brandon Boykin is in the NFL, so, if I’m plotting strategy for the Georgia special teams, I’m saying go after every punt. Our best-case scenario is a block; our worst-case scenario is to draw a roughing penalty that gives a newbie underclassman who weighs what I weigh something serious to think about the next time he’s sent in to punt, and we all know there will be a next time. I say smear their punter; let’s let Bonani put the “P” in “R.I.P.”

What You Will Say to Fellow Georgia Fans on the Way Out of Sanford Stadium if Your Pop Culture References Stop in the Early 1990s the Way Mine Do: “The Owls were just what they seemed!”

What You Will be Tempted to Say (But Probably Shouldn’t Say) to Visiting Fans on the Way Out of Sanford Stadium: “Y’all beat ‘Bama for us next week!”

Fun Facts You May Want to Work Into the Conversation at Your Tailgate: Former Owls skipper Howard Schnellenberger was Mark Richt’s head coach during Coach Richt’s playing days with the Miami Hurricanes. Coach Richt, a 1978 Boca Raton High School graduate, hails from the same town as Florida Atlantic University. While in college, Coach Richt was nicknamed “Boca,” and his bowling shirt is stitched with the nickname “Super Boca.”

The Short Version: Owls may be nocturnal creatures, but this night outing between the hedges is the season’s biggest body bag game for the Bulldogs. Florida Atlantic is bad by Sun Belt standards, and FAU will be breaking in a new head coach as part of an opening gauntlet that sees the Owls play seven of their first ten contests away from home. Florida Atlantic has never beaten a current BCS conference opponent in a true road game, and FAU’s six previous losses to SEC teams came by an average margin of around 30 points per game, even with last year’s relatively close contest at Auburn. A rare early-season night game in Athens should make for a rowdier crowd than usual against an opponent of this caliber, and the combination of defensive prowess and superior talent should allow the Bulldogs to pull away late in the second quarter before beginning to empty the bench late in the third period. Prediction: Georgia 41, Florida Atlantic 9.