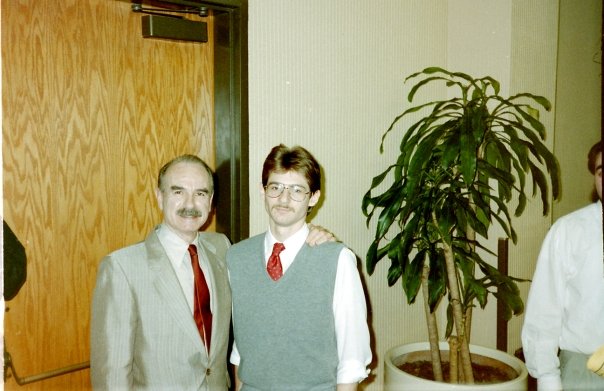 This photograph of me with G. Gordon Liddy at the Tate Center in 1990 has nothing whatsoever to do with this posting, but, in order to avoid running the risk of copyright infringement, I am using it instead of one that is more relevant. Damn laws. (Credit: Doug Muse, an old friend of mine and fellow former College Republican.)

As you may have noticed, there was no Sunday summary last week, largely because there was no news of note, unless you count announcements of Georgia Bulldogs football players being named to this or that largely meaningless preseason award watch list, which I don’t. This weekend, however, we have the London Olympics, in which 26 entering, current, or former Red and Black athletes will be participating. Though Saturday was just the first day of competition at the 2012 Olympiad, Athenians already have distinguished themselves on the court and in the pool; viz.:

At the All England Lawn Tennis and Croquet Club at which he already had earned immortality, John Isner claimed his opening singles match over Belgian Olivier Rochus, who, at 5’5”, is approximately half Isner’s height. The hard-serving American ace took his first-round contest, 7-6(1), 6-4, and will take on Tunisian Malek Jaziri in today’s round of 32. Incredibly, Saturday’s Isner victory marked the first Olympic competition featuring a Georgia men’s tennis player.

It was in swimming, though, that the Bulldogs produced their initial medalists, as Allison Schmitt anchored the U.S. women’s 4x100-meter freestyle relay team en route to a third-place finish. Although the Americans had to settle for the bronze medal after Australia set a new Olympic record with a 3:33.15 time in the event, Schmitt and her teammates finished in 3:34.24 to improve upon the United States record of 3:34.33 set by former Red and Black swimmer Kara Lynn Joyce and three other swimmers in the 2008 Olympiad. The 2012 U.S. squad’s medal is shared by former Georgia swimmer Amanda Weir, who entered the pool for the 4x100-meter freestyle relay in the preliminaries.