I spent much of my time as a child with my grandmother, a woman who taught high school English for over 30 years. She always encouraged me to keep a journal of my thoughts. She believed it was a good way to relieve frustration; instead of taking anger out on other people, it was therapeutic to put it on paper. This writing is my effort to relieve my frustration anger downright pissed-off mood about the state of Georgia baseball.

The season is officially over, as the Dawgs were (deservedly) shut out of a regional. Finishing the season at a very pedestrian 31-26, the Dawgs dropped 2 from their 2011 win total, though they had six fewer losses. Thirteen of the Dawgs' losses came by 2 runs or fewer, so some might see that as a good sign. For pitching, it's encouraging, as the hurlers posted the best team ERA in 35 years. This is, however, the dead-bat era of college baseball. The team ERA was also helped immensely by Alex Wood's amazing 2.73 as a starter, and relievers Jay Swinford and Chase Hawkins at 2.01 and 2.52, respectively. 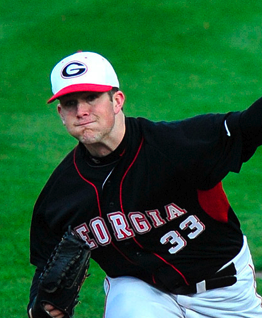 When one looks at the season statistics, the anemic offense is much more of a concern. The Dawgs left 501 runners on base this season. No, that's not a typo. Let it sink in...501 Dawgs reached base and didn't score. By contrast, Dawgs opponents left 408. We scored only 279 runs, compared to our oppoents' 243. Take out the 11 runs UGA scored against Presbyterian, 13 against Winthrop, and 23 against Alcorn State, and the Dawgs were outscored by their opponents. Normally, teams improve offensively as the season goes on. In the case of this year's team, the opposite seemed to be the case, as the Dawgs, who scored 8 runs or more 9 times this season, did it only 3 times in April or May. The Dawgs won 11 of their first 13 games, but they faltered fell apart down the stretch, going 18-21 after beginning SEC play, going 14-15 in conference. Coach Polk used to say that, in conference, the key was to win 2 out of 3 at home, and not get swept on the road. Doing that would get you into Hoover, and would get you into a regional when you took care of business out of conference. Unfortunately, this Georgia team didn't share that philosophy, dropping 2 of 3 to cellar-dwellar Alabama in Tuscaloosa to finish the regular season. The Dawgs promptly dropped 2 straight in Hoover, including a loss to an Auburn team Georgia had swept just two weeks earlier.

Earlier this season, Kyle presented the case for replacing David Perno. I left my response in the comment thread (and was politely informed that it was TL; DR), so I'll go over a couple of those arguments again. Lack of execution on the field is a direct result of coaching. Players who arrive at UGA as highly touted recruits seemingly regress during their years in Athens. While the Diamond Dawgs have made three trips to Omaha under Perno's guidance, the last one was in 2008. Just two years ago, the team posted the worst record in school history. The teams who have had success shared a common link: they had a gutsy, outspoken player who was willing to lead his teammates to victory. When Georgia teams lack that, they don't win. Coach Perno appears to be unable to inspire his kids to go out and win. He also appears to be unable to teach fundamentals like hitting the ball if it's for anything other than a homerun. While Josh Morris, Rich Poythress, and Gordon Beckham hit awe-inspiring homeruns at Foley, new bats mean that doesn't happen anymore. Yet, Georgia's teams can not bunt. Our teams can not manufacture runs. We are unable to execute basic fundamentals like hitting sacrifice flies to score a runner at third, or even hit the ball on the ground to the first-base side of the infield to trade an out for a run.

In Perno's 11 years at the helm, there have been no fewer than 9 assistant coaches make their rounds through Athens, three of them pitching coaches. While Perno doesn't have a pitching coach currently, he fired Butch Thompson (pitching coach at Mississippi State, SEC champs, competing in a regional) and Roger Williams (pitching coach at Louisville, Big East champs, competing in a regional). He also fired Don Norris (current assistant coach at Florida, #1 national seed), and he couldn't get along with Doug Sisson (current first base coach for the Kansas City Royals, still resides in Athens). The only consistency on the staff has been Jason Eller, who is, by all accounts, a good recruiter, and Perno. Both will be sitting home during the month of June while their former colleagues play for a national championship.

Since I am approaching Kyle-level length on this post, I'll leave you with a question. Georgia Tech is playing in the postseason in baseball for the 26th time in the last 28 years. Georgia has made it just 5 times in the last 11. Is mediocrity acceptable to you?