Georgia Bulldogs' Athletic Director Scores a 9.9 in Women's Gymnastics But Is Charged With an Error in Baseball

Share All sharing options for: Georgia Bulldogs' Athletic Director Scores a 9.9 in Women's Gymnastics But Is Charged With an Error in Baseball

In case you missed it - I had spotty cell reception - David Perno is returning as baseball coach, according to McGarity.

As reported here recently, Danna Durante has been hired as the new head coach of the Gym Dogs and the Georgia athletics administration appears inclined to take much smaller steps in the direction of improving the Diamond Dogs. (My profuse thanks go out to leedawg for chasing down more detailed descriptions than those contained in Seth Emerson’s initial report published on-line.)

Regarding Coach Durante, I like the hire, but I don’t yet love the hire. She wasn’t my first choice, but she was on the list, and she comes from a quality coaching tree. At a minimum, though, the actions taken by the administration on the gymnastics front were bold and decisive. By contrast, the steps initiated to improve the oldest varsity sport at the country’s oldest state-chartered university were markedly less ambitious and immediate.

Explaining why David Perno’s job was not in jeopardy, Greg McGarity said:

Dave will be back next year. It's not even an issue. If you take SEC records over the last two years, and you give credit to South Carolina, Florida, and Vandy, and do some research about where the rest of us are. . . . Over that two-year span we're one game over .500. Arkansas, Ole Miss, LSU, you've got a lot of schools that are right where we are as far as SEC standings.

With all due respect, Greg, that’s weak. Being one game over .500 is not good, I don’t care how many other teams are just as mediocre as we are. If we’re really going to compare ourselves to the dregs of the conference, though, let’s look at the four teams with worse regular-season SEC records than ours: Georgia went 5-4 against three of them (Alabama, Mississippi, and Tennessee), and the fourth (Auburn) eliminated the Classic City Canines from postseason play, so the good teams aren’t exactly the only ones against whom we’re struggling. Moreover, the Diamond Dogs’ middling regular-season success, even if erroneously deemed acceptable, cannot mask the fact that the Red and Black have gone 3-6 in their last nine SEC Tournament games.

Why, by the way, is our athletic director defending his head baseball coach by looking strictly at the last couple of seasons? Because, three years ago, David Perno led his alma mater to the worst baseball season in school history. Finally, I give plenty of credit to Florida, Vanderbilt, and two-time defending national champion South Carolina, but you can’t just accept being entrenched permanently behind three teams in your own division as a matter of course. The Gators may boast the league’s premier athletics program, but we are right behind them, and the Gamecocks have made great strides in several sports, but are we really prepared to accept that we can’t hang with Vanderbilt?

That’s all right, though; we can afford to wait on the coaching change we all know is inevitable, can’t we? After all, we’re refurbishing Foley Field, complete with improvements to the batting cages, dugouts, locker rooms, players’ lounge, and training room, correct? Actually, that’s what I thought, too, before the aforementioned leedawg set me straight by pointing out this report:

The board approved spending $2.73 million on several facilities projects. These include improvements to the landscape beyond the outfield fences at Foley Field; upgrading the scoreboards at the baseball, softball and soccer stadiums to gain more video capability; and reworking Gate 10 at Sanford Stadium. The $2.73 million also includes funds to begin design work on a possible eventual renovation of the main entrance, concourse and press box at Foley Field; that project, if eventually undertaken, probably would cost around $10 million.

The board also approved $2.73 million for facility upgrades including:

--$1.35 million for minor Foley Field renovations. That would include a canopy to replace the trees beyond the left field wall and adding a retaining wall and seating at Kudzu Hill.

McGarity envisions an eventual $10 million renovation that would start after $5 million is raised. Georgia will unify the facility and address current code requirements including a new press box. The renovation’s eventual focus will be at the main entrance to the exterior plaza, ticket booth, entry gates and flow into the main concourse and the seating bowl will be reconfigured. Renovations will also be done to the restrooms, concession and main concourse.

--$1 million for upgrades to scoreboards to baseball, softball and soccer to include HD video display. Each is in their seventh season of operation. Sound system speakers will be upgraded and a retaining wall will be constructed at “Kudzu Hill” and storm water system improved.

And, finally, this report:

Part of McGarity’s baseball-specific request was also designated to initiate plans for an estimated $10 million renovation of Foley Field. The facelift would include updates to the stadium’s façade; dugouts, locker rooms and batting cages; an expanded press box; elevator and ramp access to bring the stadium up to Americans with Disabilities Act (ADA) compliance; expanded concourse, ticket booth, concessions and restrooms; and a renovation to the entryway at the stadium’s main gate.

McGarity did not want to place a timetable on when the full expansion project, but said he hoped to begin fundraising immediately. He hopes to raise at least $5 million of the necessary funds before finalizing any renovation plans.

The board will likely re-examine the issue at its next meeting in the fall -- but McGarity said he hopes to begin moving on the project as soon as possible.

“I want to go. I’m not one to sit around,” said McGarity, who noted that the 2014 season is the absolute earliest such a renovation project could be completed.

I’m a big fan of McGarity’s, so I’d like to think he’s being shrewd, and that, rather than change coaches simultaneously in what arguably are two of the University’s five most important sports, he’s focusing first on gymnastics and biding his time so he can bring in a new baseball coach on the eve of the grand opening of freshly refurbished Foley Field. The problem is that the baseball program needs immediate upgrades, both in coaching and in facilities, and further delays serve only to cause the Diamond Dogs to fall even farther behind.

Georgia is one of three SEC programs to have won a College World Series; the other two, Louisiana State and South Carolina, opened new baseball stadiums in 2009. Alex Box Stadium seats 10,326, and $35.6 million Carolina Stadium has a capacity of 8,242. The Bayou Bengals and the Gamecocks were among the top ten national attendance leaders last season, seven of whom (including Texas A&M) are in the SEC . . . yet Georgia is not among them.

I would blame this on a lack of foresight, but the 2008 facilities master plan expressly recognized the need for upgrades to Foley Field. Four years ago, our athletics administration acknowledged the advisability of aspiring to this: 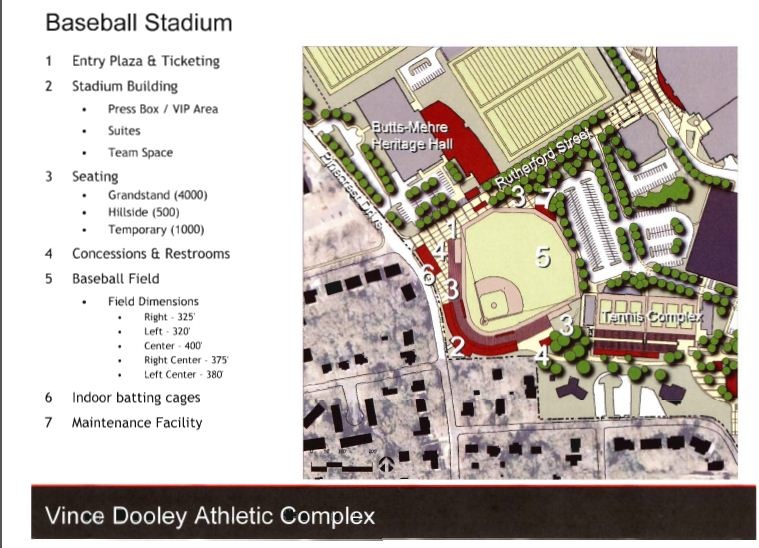 There were, of course, more immediate priorities, such as the Stegeman Coliseum renovation, but we have the SEC’s most profitable football program, for crying out loud; we shouldn’t have to postpone improvements to our baseball facilities while we hold fundraisers like we’re trying to pay for a high school band trip by conducting bake sales and selling fancy scented candles or wrapping paper door-to-door.

The decision to hire Danna Durante may work out, or it may not, but the decision to hire Jay Clark clearly was a flop; a program that had won five consecutive national championships declined immediately, never finishing better than third at the SEC Championships and never making the Super Six after having never before failed to make the Super Six. Change was needed, so change was had, because standing pat simply was not an option.

Had Georgia retained Jay Clark, we would have been sitting here one year hence having this exact conversation, and Greg McGarity was right to heed the wisdom of his mentor, Jeremy Foley, who has been heard to remark that anything that must be done eventually must be done immediately. That level of decisiveness ended the tenures of Johnny Griffith and Jim Donnan, leading directly to the hirings of Vince Dooley and Mark Richt. Who doubts that we will be sitting here one year from now having this exact conversation about David Perno? If we will, what do we gain by waiting, other than growing another year older, and delaying by another season the recovery of our storied baseball program?

We in Bulldog Nation have spoken of “Evil Richt” and “Evil Bobo.” Well, we need an Evil McGarity, too, especially after several years of Vince Dooley and Damon Evans focusing on profits instead of championships. (Unfortunately, when Evil Evans finally showed up, police reports referring to red panties followed immediately thereafter.) Evil McGarity acted swiftly and decisively with regard to women’s gymnastics, but Evil McGarity took a coffee break---Evil McGarity likes warm beverages; it’s the devil’s temperature---when he should’ve been dealing with baseball instead. An opportunity was missed, and, accordingly, another year will be lost.