Spring, mixed with some pollen, is in the air and practice is off and running. Well, the watered down part is at least. The first two days of Spring practice were held without pads or shells. Being the fanatic I am, I still found some joy in knowing my dawgs were hitting the practice fields for the first time in the months. There are some interesting storylines brewing, though. We'll get into those after the jump..

First off, Malcolm Mitchell is now a cornerback, the only question is for how long. He seems to be adjusting well and is receiving praise from just about everyone. He's actually his own biggest (maybe only) critic.. He has incredible potential as a corner, but the move is likely to be temporary as Richt has hinted he will probably move back to wideout after the suspensions to Branden Smith and Sanders Commings are served. But, with the overall depth at WO, his ridiculous potential as a CB, and his progression and understanding at the position I wouldn't be shocked to see him stick there for his remaining 2 years at UGA. In any event, I advise EVERYONE to follow this link showing Mitchell's epic battle against gravity. Needless to say, he won.

Then there are the other stories. First off, this guy is on campus. And may I say, it's refreshing to see that #4 jersey.. Feels like its been forever. 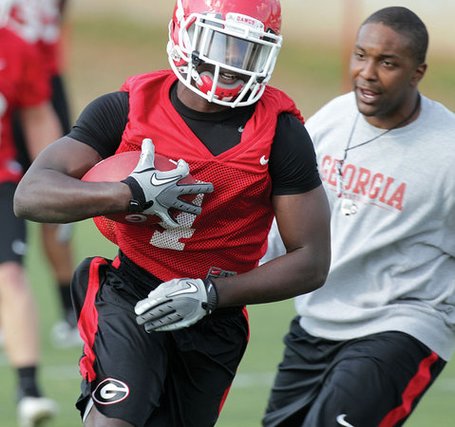 The bigger story in the backfield is Isaiah Crowell, naturally. Seems he's emerged from the circus of last year stronger, mentally and physically. He's up to 220 lbs while running smooth and he looks to be in much better shape. Also, he's pain free for the first time in a while as he played through various injuries last season, a thing that may be reduced thanks to his better shape and added strength. He and Ken Malcome are rotating with the first team while Samuel and Marshall rotate with the second. Speaking of Samuel, he's still working at RB but Richt has said he will cross train at FB at some point.

In other news, the staring O-line at this point (sure to change various times) is as follows: LT Kenarious Gates LG Kolton Houston C David Andrews RG Christian Burnette RT Watts Dantzler. Houston was ineligible last year, but was highly recruited for a reason and has great athleticism for a pulling guard. Danzler was a very impressive practice player last year and due to his progression from his jr year of HS till now, many close to the program feel he'll be an NFL player one day. Both he and Houston will get plenty looks and have legitimate shots to start this year. On the defensive side, OLBs Ray Drew and Cornelius Washington are cross training at DE, a position Drew will eventually call home. He said he wants to be "the next Richard Seymour". I wouldn't bet against him.

Justin Scott-Wesley- Caught a deep ball in practice that was "pretty special" according to CMR. Overall, the coaches seem to like what they see in the RFr track star as hes been receiving alot of one-on-one time with Tony Ball and running with the 2nd string. Hes down to 210 (at times was 230 last year) and although hes still raw, hes hes taking the necessary steps to be an breakout player this fall. It's really a shame Conley is injured at the moment..

Malcolm Mitchell- As shown above

Bacarri Rambo- Said to have the best hands/ball skills on D. Made some great catches in practice.

The whole backfield- Ken Malcome said the MAT drills were the hardest things hes done in his life, but he went from F's to A's as they progressed. One reporter said he's "lost his baby fat".. Keith Marshall is 200+ and I honestly don't see how he doesn't elevate to #2 on the depth chart with his talent level. Then theres Samuel III and also Gurley II coming in the summer. Overall, the position looks indestructible regardless of any kind of horrific disasters nature will throw at it

Cootie Harrow- Has also shown great hands in practice. Don't know what it'll equate too, but worth a mention.

What's the biggest storyline of this Spring?