It’s Monday morning, and it’s time we got up to speed, and, by "we," I really mean "me." I was in a mediation all day on Thursday, after which I drove up to Athens for a continuing legal education seminar beginning on Friday. Frankly, that kept me incommunicado at the end of the week, which had me playing catch-up all weekend, so, if I’m late to the party on some of this, I apologize profusely, but here’s the latest, in case you hadn’t noticed, accompanied by this week’s YouTube musical selection featuring William Shatner:

On that same subject, my thanks go out to Pete Campbell, one of the many readers who have been kind enough to leave comments or send e-mails regarding our recent coverage of Georgia men’s and women’s lacrosse. I’m impressed by the knowledge and passion of those who have voiced their support---I have learned, for instance, that lacrosse, like basketball, is a sport entirely indigenous to North America, and that the Indians who considered it a suitable way to train for (or, in at least one instance, a suitable substitute for) war referred to it as “the Creator’s game”---and I’m grateful to Pete for sending me some pictures from this week’s men’s lacrosse action, including this one: 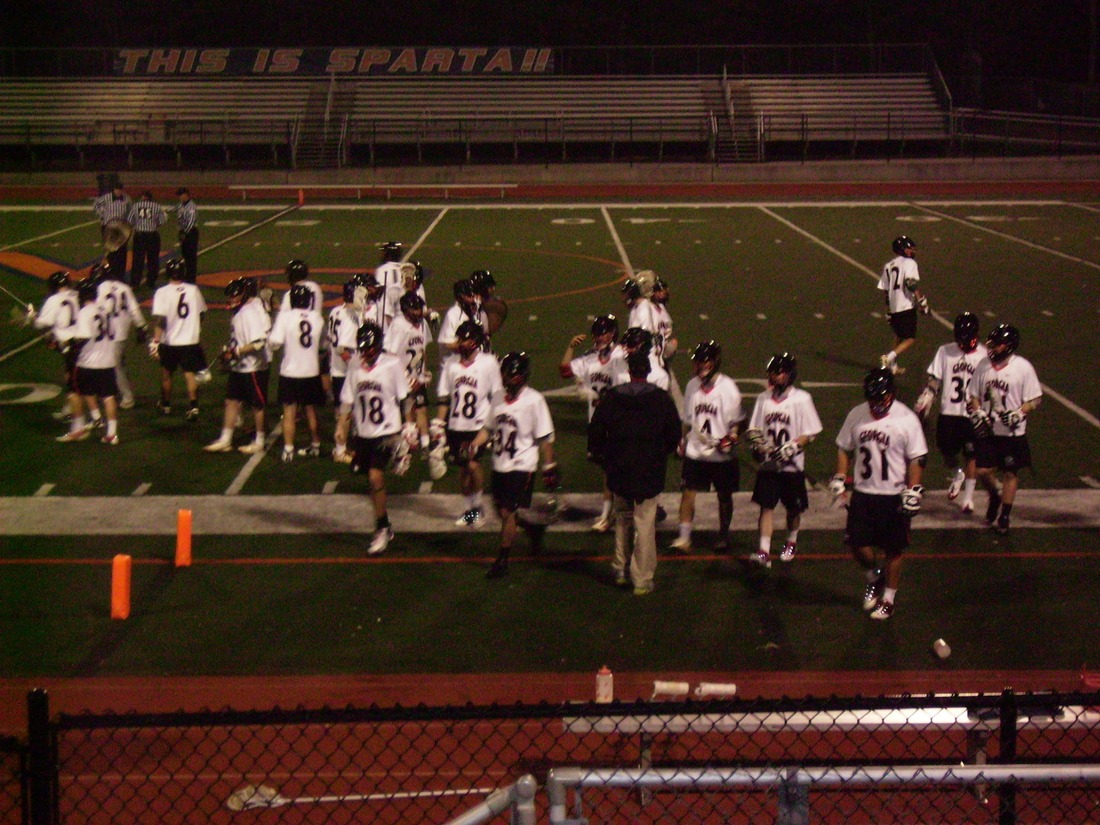 Seth Emerson has been dropping details on us right and left lately, bringing us the news that point guard J.J. Frazier has committed to play for Mark Fox, defensive back Shaq Wiggins has committed to play for Mark Richt, Chris Sanders hopes to return to Georgia after a year at Georgia Military College, and Greg McGarity wants to preserve Georgia’s permanent rivalry with Auburn while keeping the SEC slate at eight games so the Bulldogs periodically can schedule Clemson. All I can say about the latter is that McGarity is doing the Lord’s work, and I salute him for it.

Apparently, Hines Ward likely has played his last down as a Pittsburgh Steeler. In a related item, I probably have rooted against a meteor obliterating Pittsburgh for the final time. While we’re on the subject of popular former Bulldogs who now are professional athletes, John Isner beat Roger Federer in the Davis Cup.

Auburn defensive coordinator Brian VanGorder (I throw up in my mouth a little every time I type that) already appears to be having an impact on the Tigers’ defense, as Auburn announced Wednesday that cornerbacks coach Philip Lolley is being kicked upstairs. This probably means Coach VanGorder plans to hire a secondary coach of his own choosing. Wait; are you thinking what I’m thinking? Say, you don’t suppose there’s a chance that . . . well, you know:

Chizik gave no indication which direction he'll search will take him, but he could lean on new defensive coordinator Brian VanGorder for some advice on at least one possible candidate. VanGorder knows Willie Martinez, who coached with VanGorder at Georgia, Central Michigan and Central Florida, and is available after leaving Oklahoma. . . .

Martinez spent the last two seasons at Oklahoma. He left the program after the 2011 season when head coach Bob Stoops hired his brother, Mike, to coach defensive backs.

Martinez and VanGorder were on the same Georgia staff for four years. Martinez replaced VanGorder as defensive coordinator in 2005, a position he held for five seasons.

Well, Coach Martinez succeeded Coach VanGorder as Georgia’s defensive coordinator; I wouldn’t exactly say he replaced him. Still, if the thought of Aaron Murray and Malcolm Mitchell going up against a Willie Martinez-coached Auburn secondary doesn’t get your Monday morning off to a slam-fantastic start, then, man, you’re reading the wrong weblog, my friend!