Merry Christmas, Everyone! So, Who Got a Sweater?

I don't know about you, but the Football Grinch stole what I really wanted for Christmas back on December 1. But, that's okay! Somewhere under that tree is a new electric razor, or some really cool computerized gadget or perhaps a book I've really been wanting to read. At any rate, I hope Santa was extra good to you, dear reader. Merry Christmas!

Share All sharing options for: Merry Christmas, Everyone! So, Who Got a Sweater?

It'll probably be a slow news day on Christmas...as it should be (unless we name a new defensive line coach) because it's a time to be reflect on the Reason for The Season. I was thinking perhaps we could have a little bit of fun. So, in the spirit of giving and receiving, I had a question:

What was the All-Time best Christmas present you ever got? That one gift that was either a total surprise, or something that made such an indelible impression on you that you'll remember it forever because it was that special.

Conversely, what was the worst gift you ever got? You know, the one that was so bad you wouldn't dare re-gift it.

Christmas, 1970 and I was 10. I wanted a new bike, and up until then the "neighborhood bicycle wars" were getting out of control. The coolest kids had the best bikes, and back when kids actually went outside to play, the bicycle was more than a mode of transportation. It was a status symbol. Anyway, I wasn't really expecting anything fancy because my folks didn't have much money at the time. But what I really wanted was a Schwinn Stingray and that's exactly what I got. It was jade green with a 5-Speed shifter, banana seat and a sissy bar. It also had "slicks" on the back (basically the rear tire was fat with no tread = slicks). It was so awesome, I remember just standing in the family room when unbelieving eyes first gazed upon what was the most beautiful piece of machinery ever produced in any American factory. I really was in shock. To this day, I don't know how my folks knew what I wanted because I thought it was so out of my grasp, and theirs. It really must have been Santa Claus. 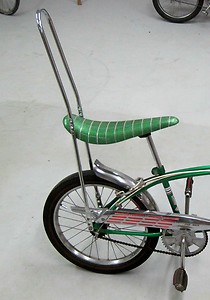 via i.ebayimg.com
Very similar to my best present ever...still the bike of my dreams

Conversely, when I was matriculating at the University of Georgia a dear, sweet Aunt of mine actually sent me a sweatshirt. I believe it was Christmas of 1982, just prior to our National Championship game against Penn State. Anyway, the sentiment was pure and kind, but the gift itself was a disaster. What my Aunt sent was a sweatshirt. From the North Avenue Trade School. At the time, she lived near Chicago and, well, probably asked where I went to school and probably didn't realize that Georgia Tech was close enough. Navy blue with the gold GT logo. It was hideous. I didn't re-gift this. I'm pretty sure it found its way into a Goodwill Industries or Salvation Army collection bin somewhere and I hope it brought some needy person warmth...maybe in Krakow.

Those are my little anecdotes. Let me hear yours. Mine are pretty tame, but I'm sure there are some real doozies out there.

And let me take this opportunity to wish everyone, Dawgs and Rivals alike, a very Merry and Blessed Christmas. Thank you for reading our little blog and for contributing so much to our community. You are our gift.