Q&A with Corn Nation: Learn more about Nebraska before Georgia faces them in the Capital One Bowl

Like us here at Dawgsports, Corn Nation has a large staff with well reasoned, but differing opinions. I asked them a couple questions, in what will be a much larger series of Q&As between our staffs leading up to the New Year's Day showdown between #7 Georgia and #16 Nebraska in Orlando's Citrus Bowl. So, without further ado, let's get to the questions....

Share All sharing options for: Q&A with Corn Nation: Learn more about Nebraska before Georgia faces them in the Capital One Bowl

1. For Georgia fans who haven't been able to watch much of Nebraska this season, let us know what to expect. What style of offense does OC Tim Beck run? Who, aside from QB Taylor Martinez (we'll go in depth on him later), is a threat?

Aaron: Nebraska runs a variation of the spread offense. They like to stretch the line of scrimmage with speed running to the outside to set up power running in the middle. Success here allows our TE's and WR's space to get open.

Jon Johnston: "Multiple", which, apparently means whatever they want. The base offense is a spread, but they will line up and run in a heavy formation with fullback and tight ends as they see fit. Running backs are very good - Rex Burkhead will be healthy, the all-around do everything guy. Ameer Abdullah has started most of the season, good mixture of size and speed. Braylon Heard hasn't seen much in the way of playing time this season, but may ultimately better than Abdullah and Burkhead.

Brian: This is kind of interesting to me in what Beck has in the playbook. He made his bones in college at Kansas under Mark Mangino, and Mangino made a living under Mike Leach at Oklahoma, so he can show parts of the Air Raid offense. However, you can also see his spread tendencies from being at Mansfield Legacy HS in Texas. With that, he's also intertwined the Power I that Osborne made so famous in Lincoln when he was head coach. It's really an interesting mash up of all these parts of so many offensive concepts.

Wide receiver is something that Aaron brought up, and this is easily the best group in the Big Ten and one of the better ones in the country. Kenny Bell is the leader of catches on this group, but you have to worry about Jamal Turner (who finally got off a milk carton against Michigan State) and Quincy Enunwa, a big guy who can not only catch the ball but block also.

Greg S: You can expect to see a multiple offense. The team's base would be the spread but you will see the pistol, some I-form, and even big or heavy sets. They have the weapons to run multiple set well; however, the Huskers aren't dominant in any one set. To me, the offensive success of this team depends on being able to run the ball effectively. That starts with Rex Burkhead and Ameer Abdullah, the combo that gives Nebraska a bit of a "Thunder and Lightning" feel.

2. Also, while we have some familiarity with Pelini's 4-3, has it changed much in the last few years or with his brother Carl now running the show at Florida Atlantic? Who are the playmakers to focus on defensively? 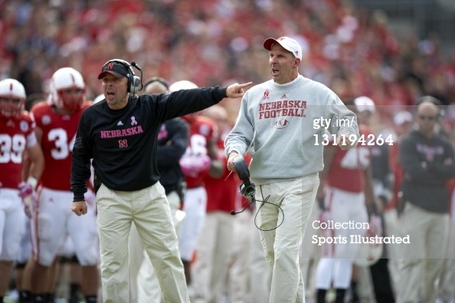 Aaron: Bo likes to contain the center of the line and force runs to the outside. Doing so allows our LB's and DB's to focus on the passing game and outside run game. It's a pretty high risk high reward strategy. We tend to be in trouble when our line gets eaten up.

Jon Johnston: Oh, yes it's changed. It's much more porous against the run than in the previous versions. 95th against the run in a conference that's known for rushing, and the defense lost their best defensive tackle (Baker Steinkuhler) the week before the conference championship game.

Defensive playmakers include senior defensive end Eric Martin, who leads the teams in sacks (8.5 - no other Husker defender has half that many) and tackles for loss (16 - second is senior safety P.J. Smith with eight); senior middle linebacker Will Compton, who leads the team in tackles (101); and senior safety Daimion Stafford, who leads the team in interceptions (four), and is second in tackles (89). Stafford is a wildcard. When he plays well, he's excellent and a hard hitter, but he also leads the team in stupid plays. He typically can be counted upon for one personal foul penalty a game. In the Big Ten title game, Stafford's lack of discipline was exploited by Wisconsin as he was continually sucked out of position on misdirection plays.

Brian: To follow up on Jon's point, the defensive line is just thin and undersized, and what is good has been either suspended (Chase Rome) or injured (Thad Randle). Baker Steinkuhler is going to be missed, even though in my eyes he was playing on the wrong side of the ball (He was a 5* OL when he signed with Nebraska). Cameron Meredith isn't a DT, and with the depth issue, it's a big time worry for not only the Cap One Bowl, but next year.

Mike: The real playmakers are in the secondary, starting with nickel/cornerback Ciante Evans. Pelini really likes to play a 4-2-5 with Evans being that extra defensive back, lining up as a linebacker. He's Nebraska's best pass defender, so when Pelini decides he needs three linebackers for run support, Evans frequently slides over to corner. It's been a revolving door at the other corner position: Josh Mitchell is only 155 pounds, but plays like he's 215; very physical. Stanley Jean-Baptiste is a converted receiver; he's either very good or very lost on the field, and you never know which one is going to show up.

Greg S: Bo Pelini's defensive scheme is a 4-3 two gap philosophy. It relies heavily on the defensive lineman, particularly the DT's to read plays and be knowledgeable of other positions. The problem is, our line is underwhelming and doesn't really have a standout star. Baker Steinkuhler was the closest thing to an impact player on the line but he is injured and his presence is missed. The playmakers are in the secondary in Ciante Evans and Daimion Stafford. Stafford is the main guy to keep an eye on as he will make some great plays but as Jon mentioned, he will also pick up a dumb penalty too.

Much thanks to the Corn Nation guys. As said above, we're planning to do a series of these, so expect to learn a lot more about our final 2012 season opponent in the coming week and a half.