Speaking with the Enemy: Q&A with College and Magnolia

Q&A with SBNation's Auburn blog, College and Magnolia about this weekend's renewal of the South's Oldest Rivalry

Share All sharing options for: Speaking with the Enemy: Q&A with College and Magnolia

Post edit: My Q&A with them can be found here.

1) While we all can see the poor results, what has gone wrong with Auburn offensively this year? Can it be pinned on just the lack of a QB, or new OC Scot Loeffler, or is there a bigger issue in need of fixing?

It's a combination of those issues, plus a couple more. Kiehl Frazier was supposed to be the quarterback of the future, but that was when Gus Malzahn was running the offense. With the hiring of Scot Loeffler, Auburn shifted to a pro-style look, something Frazier has never experienced. For most of his time as starter, Frazier looked lost. He was prone to making mistakes, and those mistakes crushed his confidence. As you might imagine, that's a vicious cycle that leads to some pretty poor play. Frazier simply isn't cut out to run a pro-style offense. He could be great in the spread, but he was a disaster this year. Auburn made the move to Clint Moseley in the second half of the Arkansas game, but he's no world beater. Now, true freshman Johnathan Wallace is running the show. He played well in mop up duty against Texas A&M and in a start against New Mexico State, but the Georgia game will be a much bigger test.

Loeffler has been abysmal from the start. His play-calling has been mostly erratic, and he consistently goes away from the one thing that has worked for Auburn -- the power run game with Tre Mason. With a shaky situation at quarterback, one would think Loeffler would use Mason as a workhorse, but that hasn't been the case. The sophomore has carried the ball 20 or more times just twice this season, and those games were against Louisiana-Monroe and NM State.

In addition to those issues, Auburn has been playing a young offensive line. I believe the O-line featured nine freshman and sophomores. So, it will be great in the future, but this season has been filled with growing pains.

2) Not to stay negative, but again the results kind of warrant it. What happened with the Auburn defense this year? They have historically always been strong, and for a Georgia fan, the change from Roof to BVG seemed like about as good an improvement as it could get. Why has the Van Diggler defense struggled? 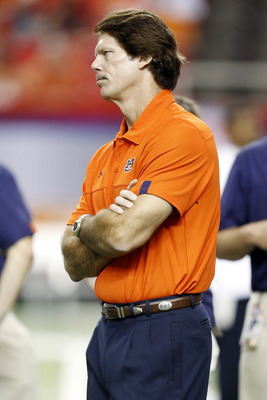 Ted Roof is a terrible teacher of fundamentals, and that's hurting Auburn this season. Many of the older guys don't know how to properly tackle or defend passes, and it's taking a full year to unlearn all of the awful habits Roof instilled. If VanGorder is around next year (should Auburn change head coaches, the whole staff will likely be replaced), we should see plenty of improvement, because the defense is loaded with four- and five-star talent.

The biggest troubles have come against spread teams. VanGorder didn't face those types of offenses in the NFL, and they weren't really prevalent in the SEC when he was at Georgia. He hasn't been able to adjust this year, which is a cause for concern. But I think he's a good enough coach that he will have them figured out next season -- again, if he's in Auburn next season.

3) With the connection between coaches (VanGorder, Martinez), and so many players (over 20 by my count), just how big is this game for Auburn? Should Georgia expect Auburn to pull out all the stops and play their best game of the year?

Well, it's a big game for Auburn in the sense that Georgia is Auburn's second-biggest rival. And yes, with so many Georgia players on the team, many of those kids view this as the biggest game of the year. As far as this season goes, there isn't really such thing as a "big game" anymore. If Auburn loses, it's what we expected. If Auburn wins, it'll be a great moment, but the Tigers will still finish 4-8.

If this was an 11 a.m. kickoff, I would be worried that Auburn might roll over and let Georgia run away with it. But it's a night game, and even with the season down the drain, Jordan-Hare should be rocking for a big rivalry game. I would expect the players to raise their play to another level, and the playbook will likely be emptied.

4) Would you rather win this game, or the Iron Bowl, and why. And a score prediction.

The answer to that would be the Iron Bowl every time. For a long time, many Auburn fans didn't even hate Georgia. We considered it a friendly rivalry. And while that has changed in recent years, nothing can match our hatred for Alabama. I live in Birmingham, so I'm surrounded by Bammers at all times. Sure, some of them are upstanding citizens, but I truly believe the majority of those fans fit the stereotype. Just go do a Google image search for "Alabama fan" and look at the results (seriously, do it). All that being said, I really want to beat Georgia.

I think the Tigers will give it everything they have, but I'm not too optimistic. Georgia 41, Auburn 17.

5) Kind of hard to avoid this question considering how the season has gone, but what is the temperature like for Chizik's seat? Is he really in danger of being fired so soon after a national title?

He's toast. The problem for Chizik is that he's having a historically bad year. Auburn is going to finish the season without an SEC win for the first time since 1950. The hiring of Loeffler was a colossal mistake, and there has been a severe underdevelopment of talent. I like Chizik, and I sincerely appreciate what he did for Auburn in 2010, but there's no way he survives this season. 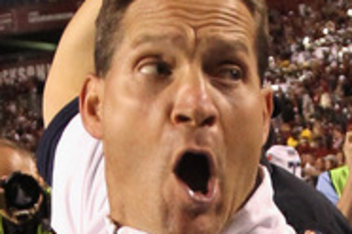