15 Thoughts on a Fall-Back Sunday Morning

Georgia whipped Ole Miss on Saturday. I actually took some notes during the game...for better or worse.

Share All sharing options for: 15 Thoughts on a Fall-Back Sunday Morning

I love 3:30 CBS starts, especially at this time of the year. The weather is absolutely perfect (usually), and the lighting upon the Sanford Stadium grass as the game begins to get a bit long-in-the-tooth just adds a special beauty. This is why professional photographers prefer to shoot either just after sunup or close to sundown. The Sanford grass looked like a carpet, having time to recover from the last home game now several week's distant. However, the glare of the mid-day sunlight was a bit extreme and seemed to be hurting our collective heads. The beginning of our game with Mississippi made it obvious that we were struggling with a bit of a Jacksonville Hangover which can be a dangerous thing. However, Georgia overcame themselves (and a horrible late-hit call early in the 2nd quarter) to down an improving Ole Miss Ackbar Black Bear Rebels squad. I've got a few thoughts on this and other happenings around college football on this edition of "15 Thoughts."

1. Georgia basically did nothing on offense except give up sacks for the first 10:30 of the game. In fact, we ran 18 plays for just 68 total yards (and 3 sacks) and the only play of note was when Aaron Murray found Arthur Lynch on a wide-open Tight End release down the Georgia sideline. That accounted for nearly 50% of our total output offensively. A very slow start...and then we dipped into our archives for a blast from the past.

2. The perfectly executed 'Rooskie' play that Murray lofted to Marlon Brown for a 66-yard score was the catalyst this lethargic offense needed. It was a great call on third-and-one, and collectively woke everyone up. Remember, we were down 10-0 and Ole Miss were jumping around and hatin' as if they had been reading a blog or something. Should we try something like this in the Dome (pending) against 'Bama? No. The play works against a young defense, and Richt knows this.

2-a. I'm an old dog, so a little history: Trickeration is fun, but you've got to be careful who you run it against. In 1975, Georgia used "The Shoestring Play" to great effect against Vanderbilt and then tried it again later that year in the Cotton Bowl (up 10-3) against Arkansas. Not only did it fail miserably, resulting in a turnover, it inspired the Hogs to score 31 unanswered points. Sorry for the tangent...I thought it was a great call at the perfect point in the game...against the perfect opponent.

3. Our defense was flying around yesterday, weren't they? Brandon Smith had a couple of great pass breakups in key spots during the first half. Damian Swann has a knack for getting to the football or just being in the right position.

4. Trailing 10-7 at exactly the 6:08 mark in the 2nd quarter we all witnessed the most bizarre 1-minute of football that has perhaps even been played in Sanford Stadium. Denzel Nkemdiche, older brother of Robert Nkemdiche - the Nation's #1 football prospect by most recruiting services who was in attendance with his mother - laid a lick on Keith Marshall which popped the ball out against our sideline. Ole Miss ball. Next play, Ole Miss quarterback Bo Wallace hits Vince Sanders over the middle for a sizable gain, but Bacarri Rambo strips the ball, which Damian Swann scoops up and returns down the Georgia sideline to set us up in good shape: The Dawgs have got the Ball. Two plays later, Todd Gurley busts through the line for about 11 yard gain, but is stripped by Nkemdiche (he was motivated). Ole Miss ball. The very next play, Bo Wallace, under pressure, throws an ill-advised pass that Alec Ogletree picks off at mid-field. The Dawgs have got the Ball. The clock read 4:47. Four Turnovers in 1:25 seconds.

At this point, I went to the kitchen for a beer and a shot.

5. How big was our touchdown just before the half? It probably flipped the game, but it was about the worst example of clock management I have seen all season. And that is saying something. Chuckdawg made the observation that once Aaron Murray stepped up in the pocket, or in this case, stepped up and rolled out to his right to deliver a perfect 40-yard touchdown strike to Tavarres King, he was most effective. It basically took Murray a almost two-full quarters to shake the cobwebs, but once he found his rhythm he was lights-out. We scored in spite of ourselves and a great play-call really bailed out both Murray and Bobo.

7. Good to see Rantavious Wooten step up. He made a great catch on a high throw on the scoring drive just before the end of the first half, and really ran under the ball on Murray's 23-yard touchdown pass to close out the scoring with 8:37 left in the game. We will need him, because...

8. ...Marlon Brown, who was having a helluva a game, got rolled up on a dirty damn tackle and hurt his knee. As of this writing, the extent of the injury is unknown. Marlon had 3 catches for 113 yards and a score (the 'Rooskie'), but more importantly, Brown is deceptively shifty and makes people miss. His Yards-After-Catch (YAC) have kept many drives alive all season long. This injury has me very concerned.

10. Zander Ogletree! Good to see you again. Bobo called a full back trap on the Ole Miss 8 yard line for the score. It reminded me of the Tech game last season when "Little Tree" nearly scored on a similar play on Tech's 35. Quality depth at full back is a good thing.

11. Alec Ogletree played his best game to date. He was flying all over the field and his demolition of Rebel running back Jeff Scott for a safety was beautifully brutal.

12. Garrison Smith had a great game. Jarvis Jones probably over pursued himself right out of 3 sacks in the first half alone. Mississippi generally ran away from his side of the field and his mates stepped up. The fact that we've corrected the ability for our opponents to gash us in the middle is what is so encouraging. Early in the game, Ole Miss effectively used the swing-pass to get speed to our edges. We adjusted. I'm loving Todd Grantham right now.

13. Marshall Morgan's PAT's are being kicked with more authority. His follow-through is much more consistent and this is refreshing to see; there is an audible 'thump' one can hear on television. His missed 43-yard field goal on Georgia's 3rd possession was about as ugly a kick that has ever been attempted on Sanford turf. Pffffffftttttt.....

14. Todd Gurley is a man, quietly gaining 117 yards on 18 carries. His 31 yard scamper to set up our last score was vintage (can you say vintage when a kid is only a true-freshman?) Gurley. Why we tried to get cute with the 'flea-flicker' after the Brunetti fumble with about 6:30 left in the third quarter is beyond me. Ole Miss was gassed on defense. Running the ball between the tackles would have surely resulted in us breaking the 40-point plateau once again. Bobo called a good game, but we already pulled a trick play out of the bag. Just run the damn ball at this point.

15. It was a great win, no doubt. Murray found his rhythm and threw for 384 yards while the offense rolled up 533 total yards. The defense is back, finally gelling after suspensions, injuries and some introspection. It's so good to see. 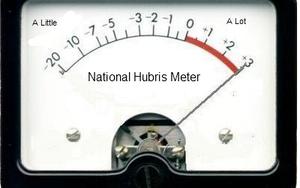 This was an important victory on many levels. We are one more win away from going back to Atlanta in early December. We took care of business in front of more than a few important recruits, and the crowd seemed to be fired up, which always helps our cause.

I'm sure I've missed some stuff. As always, this is where you can fill in the gaps, correct me, tell me I'm crazy, lavish praise, or hurl insults. Just keep it clean. We run a first-class blog over here where hate is allowed, but well moderated. And for that, I am extremely proud.