You're On Notice, Dawg! Championship Week

The work of squashing some bugs has been completed. Now, it's time to focus on the bigger fish we have to fry.

Share All sharing options for: You're On Notice, Dawg! Championship Week

It's not an exaggeration to say that this is the biggest game in which the Georgia Bulldogs have played since the Sugar Bowl on January 1, 1983. If we win this Saturday's game against the Alabama Crimson Tide, we will be in the BCS National Championship Game. And what's even better, we would be playing, of all teams, Notre Dame.

In the 1980 season, Georgia won the SEC and Alabama finished second. On January 1, 1981, Georgia defeated Notre Dame to win the national championship.

I don't just want to win this game because of the SEC Championship and potential national championship that's on the line. I want to win this game because history demands it. My stomach is already turning knots at the possibilities. But all of it will be for naught if we collapse under the pressure on Saturday evening. Therefore, I'm letting the following people know that, for Championship Week 2012, You're On Notice, Dawg! 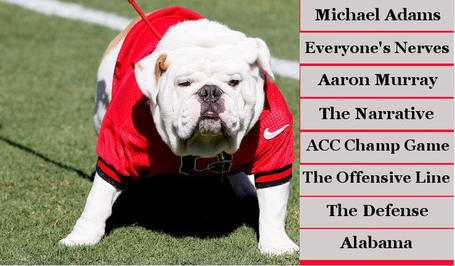 1) Michael Adams - Dammit, dude, just stay at least 500 feet away from the entire athletic complex at all times this week, ok?

2) Everybody's Nerves - One of the advantages fans of The Menses will be trumpeting over the Dawgs this week is that "Alabama players expect to play in games like this, so they don't get overly excited when they come." Well, correct me if I'm wrong, but Alabama players looked pretty out of sorts at times in Death Valley a few weeks ago, and also in that game against Texas A&M. And the last time I checked, the team that actually played in the SEC Championship Game last year was Georgia, not Alabama.

Even in the fact of that contrary evidence, however, the fact remains that if our players walk into the Dome wide-eyed and in awe, we've already lost. Our men need to be focued, jakked, and ready to play, but not so nervous that they're stumbling over their own hands at the beginning of the game.

3) Aaron Murray - One of the biggest criticisms (and it is a fair one) of our QB is that when he plays in big, high-pressure games, he is a mere shadow of the player we see in games against lesser opponents. If Aaron throws 3 first-half interceptions against Alabama, we will lose. It's as simple as that. Our defense is going to have a tall enough job... we have to surrender exactly zero points on offense to The Menses.

4) The Narrative - ESPN is working overtime to pump up Notre Dame, as should probably be expected. What should be equally not-surprising, however, is the renewed bashing of Georgia's schedule. This "weak schedule" nonsense is exactly that... nonsense. Georgia played (a full-strength) South Carolina and Florida. Alabama played LSU and Texas A&M. The only component of Bama's schedule that was more difficult than Georgia's is that The Menses played Michigan to open the regular season, while the Dawgs played Georgia Tech to close the regular season. Of course, the best way to shut everybody up is to, you know, beat Alabama...

6) The Entire Offensive Line - Alabama's defensive line is, at worst, equal to the defensive lines of South Carolina and Florida, which are the best we've played to this point. Our O-Line has to find a way to open up holes for Gurshall and to give Aaron Murray enough time in the pocket to pass the ball (or, you know, maybe throw it away once?). If our line can't get the job done, we're going to lose.

More than any other unit on our team, this is the squad that has to step up and play their best game of the year.

7) The Entire Defense - I'm not exaggerating when I say that all of our hopes and dreams for this year now rest on our defense being able to hold A.J. McCarron, Eddie Lacy, and T.J. Yeldon in check. In some ways, playing option teams two weeks in a row might actually have hurt our preparation, since defending the option requires a completely different mindset than defending, you know, a non-high-school offense.

Jarvis Jones, Alec Ogletree, John Jenkins, Kwame Geathers, Jordan Jenkins, Shawn Williams, and all of the other bigs have played exceptionally well most of this season. We need them to be at the top of their game one more time this Saturday. Literally everything depends on it.

Alabama has made their bones his year on jumping on teams 21-0 in the first quarter and then leaning on them the rest of the game. If The Menses get up 21-0 on us in the first half, you might as well just turn your TV off. We have to make these guys play a 60-minute game on Saturday, and we'll have a chance. A damn good chance.

8) The Alabama Crimson Tide - It all comes down to this. You've played your weak schedule, going up against only 2 good teams all year, and you've parlayed that run into an appearance in the SEC Championship Game. No, I'm not talking about Georgia, I'm talking about you! And your team's nickname is a thinly-veiled reference to menses! That's just gross!

That facility you'll be playing in Saturday night? That ain't named the Alabama Dome. We'll have the home-state advantage, and we'll likely have the crowd advantage, as well. (Ok, it'll probably only be like 55%-45%, but still.)

This could be the best Georgia team that Mark Richt has ever coached at Georgia, with the only real contender being the 2002 team. You're facing the Georgia Bulldogs and all of Bulldog Nation Saturday night, boys. And when you meet the Georgia Bulldogs, you're gonna feel the Bulldog Bite.

Dang, I already feel spent, and it's Sunday night. This is going to be the most exciting, and yet most draining, week in recent memory for me. Come on Dawgs... this is our team, our time! No regrets! Let's take the wood to Bama this Saturday!