You know, I could get used to being happy at the conclusion of the SEC regular season schedule.

Share All sharing options for: You're (Not) On Notice, Dawg! Week 12

After such a nearly-flawless performance, it would be difficult to find 7 people, places, or things that needed to be put on notice for this week. But, you know what? I could do it. Aaron Murray hit the ground far too frequently against a team that was determined to "Nick Fairley" him, for one. And we didn't really even try to score after about the halfway point of the third quarter. And we dang sure can't rest on our laurels too much, because the more difficult of our final two opponents might just be waiting to sneak up on us this Saturday and snatch an epic upset between the hedges.

But too many important things were accomplished yesterday. Most importantly, the Georgia Bulldogs became the first team to punch their ticket to the 2012 SEC Championship Game. But we also beat the living daylights out of Auburn in a game that wasn't even as close as the 38-0 score would indicate. When you take your oldest rival to the woodshed so completely and thoroughly, this is what you get on Sunday.

Therefore, I'm letting people know that, for Week 12, You're (Not) On Notice, Dawg! 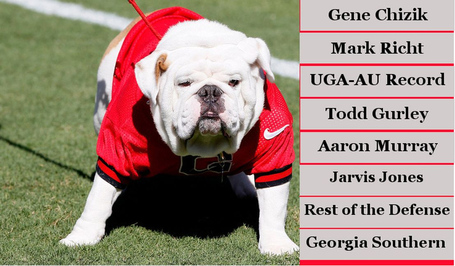 1) Gene Chizik - People of Auburn, please consider this: Your head football coach has a huge buyout clause in his contract, and all of your reserve cash has, let's euphemistically say, already been spent. On top of that, your athletic department no longer has a sympathetic bank from which to draw mountains of lines of credit with no hope of repayment.

I really like this Gene Chizik guy. Don't y'all think you could let him play out the remainder of his contract? (Please?)

3) The series record in the Deep South's Oldest Rivalry - In my mind, perhaps the most important statistic from Saturday's game is this one: The all-time series record between Georgia and Auburn is now tied at 54-54-8. We have not been level in the all-time series with Auburn since 1987, which was Vince Dooley's penultimate season in Athens. The importance of this milestone cannot be overstated. We have clawed out of the hole dug during the Ray Goff and Jim Donnan years, taken back the Auburn rivalry, and have the opportunity to switch it into our favor next year.

Now, of all the teams we have played more than 60 times, the only series record upon which we are on the wrong side is our rivalry Alabama (with a ledger of 25-36-4), which hasn't been an annual affair since the Saturday Evening Post scandal during the Wally Butts administration . If only we had an opportunity sometime this season to cut into that deficit...

5) Aaron Murray - Yeah, I know, it was Auburn's defense. But still, Murray took the helm and drove our first 4 offensive possessions 74 yards, 80 yards, 64 yards, and 90 yards... all for touchdowns. We didn't call Collin Barber onto the field to punt until the clock read 2:10 in the 2nd quarter.

Because of Aaron Murray's poise and leadership, the Auburn game was essentially over as soon as it began. You have to give the kid credit where credit's due.

6) Jarvis Jones - He didn't have a true highlight-reel play during this game, but Sack Man Jones was just as disruptive as he's been in any other game this year. He added 2.5 sacks to his tally, and continued to cause enough headaches for Auburn's offense that other players got opportunities to make big plays, as well.

Dang, we're going to miss Jarvis next year. I hope the Jags or the Chiefs appreciate what a great player they'll be getting in April (or whenever the NFL draft is).

7) The entire rest of the defense - I don't care if it is the worst Auburn team in a generation. They still hadn't been held scoreless by any team in 2012, and we haven't shut out Auburn since the SEC championship season of 1976.

Every single man on defense deserves to be applauded and congratulated for this effort. Auburn is our oldest rival, and you guys kept them from even getting on the board once. Magnificent work, men.

8) The Georgia Southern Eagles - Look, I can't be mad at you guys, and I wouldn't have been able to find it in my heart to put you guys on notice this week like I usually do with our opponent. Every time I look at Georgia Southern, I see Erk Russell's big, bald dome staring back at me. And I couldn't put Erk on notice. (He'd posthumously sic the track people on me, anyway, if I did.)

We've clinched the SEC East championship, but our season is a long, long way from being over. We still have to win the Georgia state championship over the next two weeks, and it starts by taking on a Georgia Southern team that is averaging over 37 points per game and is ranked among the top Division I-AA teams in the nation. This group of Eagles could probably beat the previous group of War Eagles that we just played, and we can't take them lightly, either as a team or as a fan base.

We need all of Bulldog Nation (and all of the students) to be packed into Sanford at 1:30 this Saturday to cheer our boys on to victory!