You're On Notice, Dawg! Bye Week

Well, here we are, Bulldog fans. We have reached the halfway point of the season. As it happens, it's also a bye week. And then, after the bye, we face Kentucky. That means that, for better or worse, we're going to spend the next 2 weeks being kicked around like an old paint can in the media for the fact that our team never really got off the bus in Columbia.

Share All sharing options for: You're On Notice, Dawg! Bye Week

I was going to use this space this week to do a "mid-season report card" on where we stood vis-a-vis our expectations at the beginning of the season. And, at some point this week (maybe Friday or Saturday), I might still do that. The aftermath of that dismal night in the armpit of the South, however, is still too strong to expect a reasonable amount of perspective to reign in such a post.

Instead, I'm going to let the following people know that, for the next 7 days, at the end of which will be only more angst as we listen to ESPN talking heads excoriate us in the absence of additional evidence, You're On Notice, Dawg! 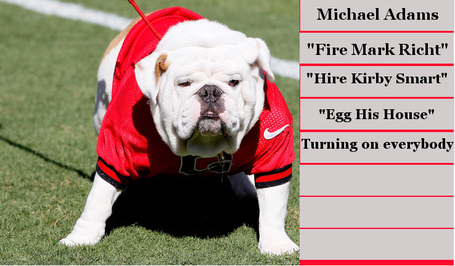 1) Michael Adams - Just for the record, I don't blame Mike Bobo for this loss. I blame Michael Adams. Why? Because I know he's got something to do with it somehow. He probably spiked the Powerade cooler with laxatives or something. You know he'd do it.

2) People who want to fire Mark Richt after losing one game - You know, I honestly thought we were past this. After coming back from the worst slump of his career to lead his team to an SEC East title in 2011, I honestly thought we were past the point of calling for the head coach's head after ONE LOSS. How the hell do you do from vocal supporter to calling for Mark Richt's firing after one friggin' game? "BUT HE NEVER WINS THE BIG GAMES, PPPAAAAAAWWWWWLLLL," you reply?

Well, from a nearsighted fan's perspective, one tends to think of all the "big games" as games you lost, because one doesn't associate winning with emotions as strong as one does when your team loses. You don't think about the fact that the Missouri game from just a month ago was considered one of the biggest games ever played in the "other" Columbia. Or that last year's Florida game was the first time we've beaten the Gators in a close game since Vince Dooley was the head coach. And how about the 2009 Tech game, when we beat a team who would win the ACC Championship game (later vacated) with (at that time) a 6-win Georgia team?

"YEAH BUT NONE OF THOSE TEAMS WERE ELITE TEAMS, VINEARDDAAAAAWWWWWWWWWGG," you might reply. Well, the line between "elite" teams (which is as arbitrary and subjective a term as there is) and "merely good" teams in many folks minds is usually whether or not they got beaten by Georgia. So, sure, Georgia never beats an "elite" team, because if Georgia had beaten them, they wouldn't be "elite," would they?

This is a circular argument, and one who makes it is simply hiding the fact that he is just pissed off that we lost. And to the wider point, it is incredibly short-sighted and narrow-minded to fire a coach because his team simply got thoroughly beaten in one game.

Mark Richt is, at minimum, one of the 3 best coaches we've ever had at Georgia. Calling for his firing because, essentially, he never goes undefeated is ignorant, childish, and stupid. You want someone who can "take Georgia to the next level," you say? Well, Georgia's on a pretty dadgum high level as it is. There are a lot more "next levels" available below us than there are above us. That "next level" you want another coach to take you to isn't likely to be a step up.

3) People who think that, in addition to firing Mark Richt, we need to hire Kirby Smart - Well, now, let's just try to figure out how many dumb things we can fit into one statement. Kirby Smart is a UGA alumnus who is the DC for the number one team in the country. But, you know what? He doesn't run that defense. Nick Saban does.

If you want Alabama's scheme, you're going to need to hire Nick Saban, not Kirby Smart. Kirby's just an unproven coordinator with no record of success outside of Saban's shadow. And I'm not saying he couldn't be successful as a head coach... all I'm saying is that when I compare him to Mark Richt as a head coach, I'll take Richt every time. If you want Saban, Jr., hire Will Muschamp. It wouldn't be the first senior athletic department employee we poached from Florida.

But better yet, if you want Saban, just hire Saban. It ain't like he's known for his unwavering loyalty to his employers. Break out the armored trucks filled with cash. Get the short dude with the world's biggest Napoleon complex in here. And then call for his head when he goes 7-6 his first year.

4) The people who thought it was a great idea to vandalize Christian Robinson's house - So, this happened:

#UGA linebacker Christian Robinson returned home from the South Carolina game to find his house had been egged and TP'd (rolled).

I don't even know what planet you have to be from to think this is a good idea. Christian Robinson even later tweeted:

Came to a house that was egged and rolled. Seems that people turn on you when you're not perfect. Thought we were in this together.

What goes through the mind of someone that would do this? Christian Robinson is one of the best players on our team... and you vandalize his house because we lost a game? Listen, I don't care if we just got beat by Idaho State 35-7. Personally attacking players is so far over the line that it makes me want to find these fans and slap them upside the head myself. This kind of behavior makes me physically ill.

5) "Fans" who turn on everybody associated with your program the moment you lose a game - Some of you people make me ashamed to be a Georgia fan. In the lead-up to Saturday's game, people were flouting this team and this coaching staff as having the best year they'd ever had, and even going so far as to compliment Mike Bobo. Then, in the span of 3 hours, all of the comments changed to FIRE EVERYBODY AND KICK ALL THE PLAYERS OFF THE DAMN TEAM.

Could you be more ignorant? (No wait, I'll answer that for you. No, you cannot.) Are you really so weak-willed and spineless that you would flap about helplessly in the wind, allowing your opinion of an entire group of people to be changed by one poorly-played, poorly-prepared-for game?

"YEAH BUT WE CAN'T WIN THE BIG GAMES, PPAAAWWWWWLLLLL," I can hear someone already replying. Well, look. You ain't gonna win every game you play. And unless you have a talent for losing to teams that are worse than you on a regular basis, like Florida State, your losses are almost always going to be to teams that are as good or better than you are. Almost every team loses "big games." Look at LSU last year, or even almighty Alabama in the regular season last year. (And how about that Sugar Bowl against Utah? Or, for Saban, that smackdown he suffered at LSU in 2004 against Georgia?) And every single coach Southern Cal, Texas, or Florida has ever had has been accused of "not winning the big games," yet somehow those schools are still considered major powers in the CFB world. Even Bob Stoops, who used to be known as "Big Game Bob," has taken a knocking from Oklahoma fans for "not winning the big one."

"Not winning the big games" is the lamest, laziest, sorriest excuse for bitching about a player or a coach I've ever heard... especially about a coach or a set of players who have won big games... just not every single one they've ever coached or played.

Even though I'm not to 8 "on notice" places yet, I'm just going to stop right there. I don't think it's productive at this point to pile on. Yeah, I'm getting a little heavy-handed with the fans, I imagine. But some of you people deserve it. Try to get some perspective on this thing before your open your mouth and make an ignorant argument for why Georgia should fire Mark Richt (And for the record, there is no argument one can make for firing Mark Richt at this point in the season that I would not categorize as "ignorant.") or how x or y player has "disgraced the Bulldog Nation."

We got our pants blown off. We're not supposed to be excited about it. But dang, at least try not to blow up the entire athletic complex because we got knocked out of the national championship picture in an embarrassing way. This is the time when we need to respond like (hopefully) our football players will: get mad as hell, pull together, and work that much harder to make sure it doesn't happen again. We need to support our team, even when they get their asses handed to them. Why? Because they're our team.

Work your butts off this week, boys. You've earned it.