After a tough day in Bulldog Nation, what do fans of the Georgia Bulldogs need to take their minds off of the football team's loss of Michael Bennett? How about an ESPNU women's volleyball open comment thread!

Obviously, subsequent events have darkened considerably the mood of Bulldog Nation, but that may mean we’re more in need of something uplifting than ever, so here’s a cool thing that happened last night, for those of you who didn’t notice. I stayed up a little late awaiting RedCrake’s weekly printable college football TV schedule, and, while I was up, I tuned in to "UNITE" on ESPNU. I often catch the re-air of the previous evening’s show in the morning, while I’m exercising, but I seldom see it live.

Last night was an exception, though, so I was watching when Danny Kanell (who previously declared Uga IX his favorite mascot) once again showed some love for the Georgia Bulldogs, picking them to defeat the South Carolina Gamecocks. By that point, I had turned off my computer, so I sent the following tweet on my smartphone:

Danny Kanell once again showing #UGA some love on @unite. We need to give him an honorary degree. #UNITE #GoDawgs

Because I was on my phone, though, it took some time to type that, and, by the time I finished and sent it, Kanell had moved on to praising the Big 12 and noting that the Notre Dame Fighting Irish, inter alia, deserved to be ranked ahead of the ‘Dawgs. That prompted me to author this tweet:

I wrote that Danny Kanell deserved an honorary #UGA degree before he said Notre Dame should be ranked above #Georgia, obviously. @unite

Amazingly enough, at the end of the episode, both tweets were featured on the show, prompting some discussion between Kanell and his co-host, Reese Waters: 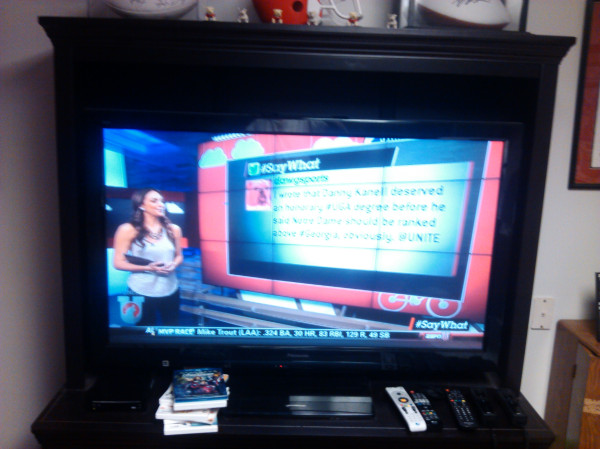 Ultimately, this led to a reply from Kanell:

So, yeah, that was kind of cool. Not cool enough to make up for losing Michael Bennett for the season, mind you, but, still, cool, nevertheless.

Also cool and on ESPNU? Tonight’s women’s volleyball game between Georgia and LSU, which will air on the Worldwide Leader’s college-specific channel at 7:00 p.m. Eastern. Consider this your comment thread, and join in the conversation!