Important note: In the week following a victory against Florida, nobody is on notice. Ever.

Share All sharing options for: You're (Not) On Notice, Dawg! Week 10

Yeah yeah, I know. We can't allow ourselves to suffer a letdown with the suddenly-not-terrible Ole Miss Rebears coming into town. And they actually are a team that's capable of beating us, and we do have to take them seriously. But this is a principle I value equally seriously. Therefore, I'm letting the following people know that, for Week 10, You're (Not) On Notice, Dawg! 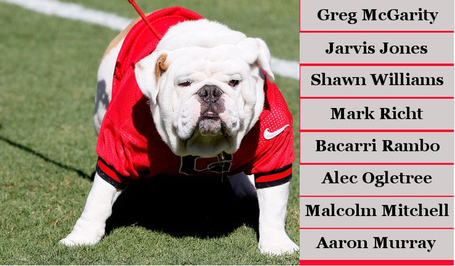 1) Greg McGarity - He's like the anti-Michael Adams, so he gets the first spot. He's a DGD, even though he ventured south of the border to learn the dark arts of building successful athletic departments from King Gator Jeremy Foley. He's also been associated with the winning side of the WLOCP virtually his entire life, so that kind of makes him the anti-Will-Muschamp, too. I love it.

2) Jarvis Jones - It would not surprise me at all if we found out that this is the first game for which Jarvis has been completely healthy since the Mizzou game. He was a beast the entire game, and single-handedly kept Jordan Reed out of the endzone and caused the fumble which iced the game for the Dawgs.

I don't even want to think about what this defense will be like next year without him. We just have to enjoy what we have this year and hope that, by some miracle, if we make it to Atlanta he and his compatriots will be able to keep Alabama's offense in check.

3) Shawn Williams - I admit that I was more nervous than most about how the "calling out" thing would play out this week. I knew it could go either way... and the defense (and, really the team) clearly responded the right way. They banded together tighter, resolved to be more aggressive, and went out and executed the hell against the Florida offense. Williams himself actually had an up-and-down game, but any time one player seemed to have a down play, the rest of the team picked it up and filled in for him.

4) Mark Richt - I don't doubt that his detractors will find a way to nullify this achievement by claiming that the Gators were overrated or something, but guess what? Coach "can't win the big game anymore" just won a huge game against the #2 team in the country. And, oh yeah, it was Florida. Mark Richt is now 3-3 in the last 6 games against the Gators, and just led the Dawgs to win in a games that, over the previous 20 years, Florida would have found a way to win every time. This is huge, and I'm giving Coach Richt his props.

5) Bacarri Rambo - You get an interception in the endzone, you get mentioned in the (not) on notice post. It's as simple as that. Rambo made several big plays on defense, and didn't get burned once the entire day. I mean, when you hold Florida without a touchdown for the first time since Vince Dooley was coaching the Dawgs, you've had a big day and made some big plays. Rambo's interception at the end of the first half was the catalyst that led us into the locker room with optimism, and allowed us to come out for the second half and continue to play with a lead.

6) Alec Ogletree - He had his ups and downs, too, but the guy, like all of his defensive brethren on Saturday, came through when it counted, and helped pick up the slack when others missed their assignments, even as his slack was picked up by others when he made mistakes.

Tree was great on multiple blitzes and in coverage, and he needs to continue that record against Ole Miss. The Rebears' pass game is very dangerous, and is a legitimate threat to us, and Tree needs to be big again this Saturday.

7) Malcolm Mitchell - Oh, how one major play changes everything in a game like the one played yesterday. Up until the 7:11 mark of the fourth quarter, I'd been yelling at Mitchell all day. The completely insane kickoff runs out of the endzone, only to make it to the 10-yard line once, and the 15-yard line the next time? Yeah. The holding call that nullified a huge Todd Gurley run? Yeah. And even three plays prior to his breakout, with the unsportsmanlike conduct penalty that caused Mark Richt to take him out of the game and give him a rare head-coach-dressing-down on the sideline.

Mitchell actually said after the game that he thought Richt was going to sit him down for the rest of the action. Two plays later, though, the coach told him to get back in the game, and Mitchell responded by running down the field 45 yards to provide the final winning margin for the Dawgs.

8) Aaron Murray - Yeah, I know, and you're right... if he hadn't completed that one pass to Malcolm Mitchell, he would have been one of the biggest dogs of the day. But you know what? He did complete that pass, and he had the guts to keep coming to the well after 3 of his first 8 passes ended up in Gator hands. And let's be honest, we need him to keep being huge in virtually every one of our final games to set up that appointment for a beat-down in Atlanta.

I need a few more days to soak this in and bask in the glory and schadenfreude. I just hope that our boys can move on faster than I can.