You're On Notice, Dawg! Week 8

After what feels like 3 years of suffering through a bye week after a demoralizing loss, it's finally time again to focus on our Georgia Bulldogs taking the field against an SEC opponent.

Share All sharing options for: You're On Notice, Dawg! Week 8

Of course, I use the term "SEC opponent" in only the most technical terms, because Kentucky has lost to both Louisville and Western Kentucky this year, managing the rare feat of coming in as probably the fourth-best football team in its namesake state. (I'm including Cincinnati in that list, primarily because I like to troll the good Big East folks in southwestern Ohio. Also, UK didn't play Eastern Kentucky or Murray State this year, so you can't honestly say that they aren't the fourth-best team in the actual state.)

Still, though, this game counts in the SEC standings, and the 'Cats did give South Carolina a run for their money for about a half, so we have to take this game seriously. Also, we need to bounce back in a big way and get back on track as we prepare for the World Largest Outdoor Cocktail Party in Jacksonville the following week.

Therefore, I'm letting the following people know that, for Week 8, You're On Notice, Dawg! 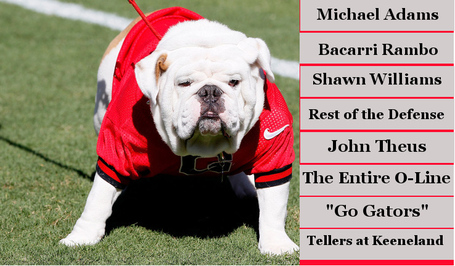 1) Michael Adams - Why Michael Adams? Because he's a jerk, has stolen money from and is a disaster for University, and everybody that has ever worked with him hates him. Plus, I have it from a very authoritative source inside the UGA administration that he already has his own blue shirt and orange pants ready to root for Florida Saturday, because of that one time he actually cheered for the Gators in Jacksonville. (And as far as I know, "that one time" means "every time they play.")

2) Bacarri Rambo - I love the passion and effort that Bacarri puts into his play, but he came up woefully short on multiple occasions two Saturdays ago against the Gamecocks. His most notable error was on the very first play, in which a game-changing interception was turned into a touchdown drive because he wasn't able to wrest the ball away from Carolina's WR. The most important rule of pass defense is that if you're going to go for the interception instead of the break-up or the tackle, you dang well better get the interception, because if you don't, it'll be a huge play for the other team. Well, Rambo went for the big gamble and lost, and the wheels were set in motion for the subsequent dismantling that we saw.

I've not yet unilaterally revoked the "Rambo" moniker (which Bacarri chose for himself, if you didn't know) and gone back to calling him "Bacarri Fudge," which was his birth name. If he's unable to step up the level of his play over the next two weeks, however... we might see a return of the chocolatey confection name that pairs a little bit too well with the offense for which Rambo was suspended for the first four games of the season.

We just need to get this thing whipped into shape, guys.

4) Everybody else on the defense - I honestly don't know what has changed so radically from 2011 to 2012, but our defense as a unit has gone from being on par with Alabama's to being on par with Mizzou and Texas A&M... and with all respect to our newest brethren, that's pretty dang bad. 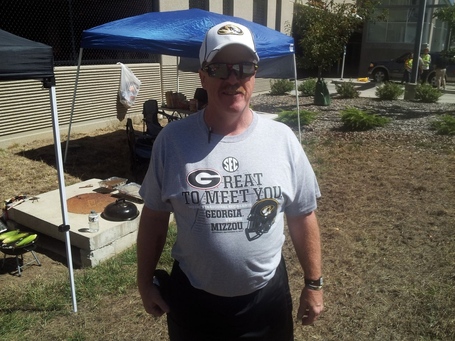 This is a great bar to set for "excellent fan base," but it's much less so for "defensive prowess."

5) John Theus - I don't begrudge the kid his performances. I really don't. He's a freshman starting on the line in the SEC, and as I said many times in the preseason, any time you have a true freshman starting on your offensive line, you've got problems. (I was roundly rebuffed when making this assessment, by the way, which has proven to be pretty accurate.)

The fact is that, because Theus is so outmatched against SEC defenses, we simply can't run on the right side of the line. This means that all a DC has to do is station his best linebacker on the left side of our line, and voilá... run game neutralized (or at least significantly limited).

The other down side of this deal is that because Theus has continued to play through his troubles, we can imply that the coaches don't have a better option available at that spot, so it's going to continue to be an issue all year. And, more significantly to me, I worry about how this will affect Theus over the course of his career. It's just not good for a lineman to get accustomed to getting pounded into a fine powder by SEC defenses. You either come to expect it or get so demoralized that you don't push as hard as you might to get better, and both of those options would be disastrous for the über-talented kid.

I have to put you on notice, dude, simply because of the performance we've seen. But keep working hard, and I believe you'll get there. (It just might not be in 2012.)

6) Everybody else on the offensive line - Everybody else, however, has no excuse. I don't care how talented and awesome and poppin' fresh South Carolina's defense is; you simply cannot allow yourself to get pushed around like that. Kenarious Gates, who is supposed to be the bedrock left tackle, got absolutely pwn3d over and over in Columbia.

The immediate solution would seem to be calling more "max protect" sets against teams with good defenses (read: Gators) in the future, but that limits our offensive options pretty significantly, and we're clearly going to be needing the offense to win more games for us.

I'm not criticizing coach Will Friend (yet), but we need to do something shore this thing up, or else we might be seeing Hutson Mason take the field again sooner than we thought (because Aaron Murray will be out with an injury).

7) Every Georgia fan who claims to be rooting for the Florida Gators this weekend - Alright, look, I get it. South Carolina lost to LSU, so they have one SEC loss (as do we). Therefore, in order for Georgia to make it to the SEC Championship Game, we need to win out against our schedule and have Carolina lose one more game. And from where it looks right now, Florida seems to be the team that has the best chance of topping the Gamecocks. It get it. It's the scenario that's most likely to happen, so you want to root for it to happen.

See, but here's the catch: The Gators are evil. They are a horrible, repulsive incantation created by all that is jorted and mulleted in the world to make you think that you should join their cause, even for a short amount of time. They are led by a turncoat traitor who can't stop being a whiny 3-year-old on the sidelines, and they are not worthy of your positive will even for a nanosecond.

Besides, South Carolina also plays Tennessee, which has a dangerous offense, and they conclude SEC play against Arkansas (STOP LAUGHING DAMMIT), who seem to have found their groove again after being Johnelle'd in their first 5 games.

I hate Florida with the fire of a thousand suns being fueled by the fire of an additional thousand suns. I wouldn't root for the Gators if they were playing Al Qaeda. I just don't know if my ticker can take the sight of a large number of Georgia fans taking their side. Please think of Vineyarddawg's health this week, Georgia fans: 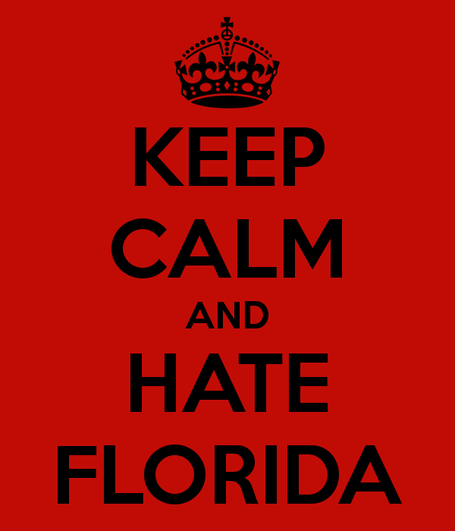 8) The Tellers at Keeneland Race Track - Let's just put it this way: Most Georgia fans don't go to Lexington primarily for the novelty of seeing Commonwealth Stadium or the Wildcats up close. I'm just saying to the folks at Keeneland... make sure you have extra staff on hand from Friday through Sunday, ok?

Special bonus "on notice" pick) Whoever selected the staff meteorologist for the Space Jump - I mean, I'm glad it worked out and all, but I think we'd have all been a lot more comfortable if they'd have been letting DavetheDawg call the shots. Also, you really needed to hear someone in the background yelling "Go Dawgs!" during those celebrations.

That's it for now! Remember that this week is the Third Annual Dawg Sports Goat Roast, so if you'll be in the Athens area during the game, come on by the Blind Pig Tavern on Baldwin Street and watch the game with us! Meet the Mayor! Tell RedCrake (and, possibly, Mr. Sanchez) how much Liverpool sucks this year (and in general)! It'll be fun all around!