How is it possible that one man could be remembered in the same breath as both one of his sport's greatest successes and the author of one of its greatest failures?

Joe Paterno passed away on Sunday morning, but his legacy (both good and bad) will remain with Penn State, and with college football as a whole, for many years to come. 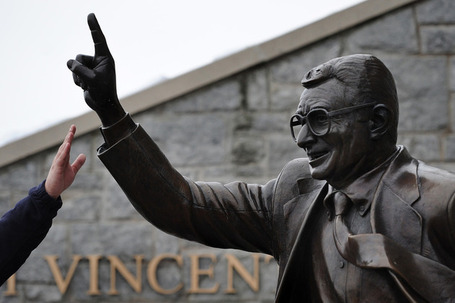 In my mind, Joe Paterno, Penn State, and Georgia are inexorably linked in the annals of college football lore. First, Paterno's first national championship came at Georgia's expense in the 1983 Sugar Bowl, and sent off Georgia's greatest player ever with the worst statistical game he'd ever had. (No small feat, to be sure.) Second, some of Georgia's best players of the past have come from the state of Pennsylvania... but more on that in a minute.

To be fair, Joe Paterno's coaching resume is rather modest by modern "What have you done for me lately" standards. He was named the head coach at Penn State in 1966 (two years after Vince Dooley was hired at Georgia), though he had been an assistant for the Nittany Lions for 15 years before that. During his 45+ year tenure as the head man in State College, his teams won two national championships, had 5 undefeated seasons, and won 3 Big Ten titles after joining that conference in 1993. To fully appreciate the legacy the man built however, as is so often the case, we must do more than simply look at the trophy case.

During the postwar years of the 1940's, '50's and going into the '60's, college football experienced a relative explosion of prestige, popularity, and TV exposure (since, you know, there were now TV's). It had always drawn respectable crowds before the advent of mass communication, but the invention of the television brought to its teams an aspect of regional pride that is still very much alive and strong today. That "regional pride" also dragged with it some regional aspects not to be so proud of: most notably, the politics of racial discrimination.

For years during Paterno's assistant coaching career, great black athletes from the south were barred from attending and playing at major universities in the south, having instead to attend colleges set aside for African Americans (Grambling, Southern, Florida A&M, etc.) or go to college at a school in the north. Likewise, since they excluded themselves from taking advantage of all the talent available at home, many southern schools, including Georgia, recruited white athletes from up north. (Among the Georgia greats from northern states during that time: Frank Sinkwich, Charley Trippi, Johnny Rauch, Zeke Bratkowski, Jim Wilson, and Ray Rissmiller) I don't point these examples out to shame Georgia or say that we were particularly worse than anyone else... I'm merely pointing out that we were a full participant in the culture at the time.

Penn State and Joe Paterno, however, decided to do things differently. For years, Penn State had chosen to admit African American students, much to the chagrin of many native Pennsylvanians, it seemed at times. But they took a bold step, and the football program reflected that courage by becoming one of the first truly integrated teams in the country.

Then, when he became head coach in 1966, Coach Paterno decided to take things one step further. He declared that he was going to embark upon a "Grand Experiment." This experiment, he said, would have a motto: Success With Honor. This would be reflected in multiple ways, but ultimately, he wanted to build a championship-caliber team at Penn State while adhering to the highest standards of character, ethics, and academics.

Within two years, his team would achieve their first undefeated season, defeating Big 8 champion Kansas in the Orange Bowl and receiving a #2 final ranking in the AP poll.

Curiously enough, he accomplished all of this while having what is today considered a fatal character flaw: he didn't bristle with hate and anger when his team lost. This quote comes from an article published in Sports Illustrated in 1968:

"We're trying to win football games, don't misunderstand that," said Paterno last week. "But I don't want it to ruin our lives if we lose. I don't want us ever to become the kind of place where an 8-2 season is a tragedy. Look at that day outside. It's clear, it's beautiful, the leaves are turning, the land is pretty and it's quiet. If losing a game made me miserable, I couldn't enjoy such a day.

When it came to perspective and priorities, I think it's fair to say that Joe Paterno had his house in order. Sort of. I have to say "sort of," because we now have realized that a large portion of the success behind this "Great Experiment" was accomplished while he unwittingly allowed a man to serially rape and molest young boys undetected for more than 2 decades. (Yes, allegedly.)

And in this, we see how quickly it can all come crashing down. You spend your entire life building up an honorable work; creating an honorable model for conducting your life and your football program. You teach kids not only how to become great football players, but how to become men of character. You donate so much money to your own school that they name the library in your honor. You give to charities so freely that it's almost a fault. You build your reputation as a "working man" who is "just trying to do it the right way," even to the point where, though you could afford something orders of magnitude more expensive, you live in a small house in a normal residential neighborhood.

And then it all comes crashing down because your #2 man was doing something horribly, almost unspeakably awful, and you didn't even know about it.

Should Coach Paterno have handled the allegations regarding Sandusky more aggressively? Absolutely. Does it permanently stain both his legacy and the legacy of Penn State University as a whole? No question. Does it erase all of the good that he's done with his life for 85 years, however? Absolutely not.

Joe Paterno was not overtly religious in his statements or actions, but in many ways, I consider him to be similar to Mark Richt. Both men proclaimed their desire to be held to a "higher standard," and both men declared their unwavering loyalty to one university, as long as the university would have them. And this is exactly what can happen when a man who spends so much effort to emphasize building a program with honor and by following the rules falls astray. All it takes is for one brick to fall out of place, and the rest of the world is only too eager to bring the rest of the house down.

What is the lesson to learn from this, then? Since we are human and bound to make mistakes, perhaps major mistakes and oversights we should have clearly avoided, should we not announce publicly that we're going to conduct ourselves with honor and integrity? After all, the arrogant, loudmouthed troglodytes of the world who only look at the trophy case will call us a failure even before they start to see cracks in our armor. Then they'll pound the shit out of us when the cracks appear. What is the benefit in trying to take the high road when you're likely to be pulled off of it by the mob?

The lesson, my friends, is that you still conduct yourself with honor because it's honorable. You follow the rules because you want your children, your fans' children, and the young men you are trying to mold to see that it is just as important to follow the rules and conduct yourself with honor as it is to win a championship. You didn't see Coach Paterno lash out at the people who fired him, or at those who were accusing his longtime friend and assistant coach (as certain other coaches have done at other Universities). He wanted to get all of the information, see if these serious accusations had any merit, before dismissing them out of hand. And when it was clear that the unthinkable was apparently true, he realized he had to resign, then did so. (He wasn't allowed to resign on his own terms, of course... but he did acknowledge that his actions and failures required him to resign.)

He knew his name was being dragged through the mud, that people were saying he was just as bad as a pedophile himself for "enabling a pedophile," but did you see him tell any reporters (with whom he had a notoriously prickly relationship) or a heckler to go shove it? Never. He made public statements multiple times about how he regretted his actions, wished he could go back and change them, and made many public calls for people to pray for the victims of this abuse.

He was human, and his legacy will forever have an asterisk. But Joe Paterno lived a great life and left a positive impression not only on the game which he coached, but on the lives of the players he coached and in the community he lived. The rest of us should be so lucky as to live a similar life.