You're on Notice, Dawg! Week 5

Share All sharing options for: You're on Notice, Dawg! Week 5

Okay, let me start off by saying this: In spite of what you might have heard, we actually won the game on Saturday. It was pretty good in the first half, it wasn't pretty in the second half... but we got the W, and anyone who watched the game should be able to agree that the Dawgs dominated the entire time.

I'm not going to say that I'm more encouraged about this team after watching this Ole Miss game, but I'm not really discouraged, either. Georgia dominated this game in every aspect except the scoreboard. Now, granted, the scoreboard is really the only part that matters at the end of the day, but if there were ever a day for our Lou Groza-quality senior field goal kicker to have a bonehead day, this was it. If Blair Walsh had not had a sprained cerebrum, Georgia would have won 36-13, and I doubt there would be as many loud complainers as there currently are.

Unfortunately, it's been a crazy week for me in terms of sleep, so I turned in early last night, and I have a work-related event in Atlanta this afternoon/evening, so between that and my normal Sunday morning commitments, I didn't have much time to create this post. As such, it's shorter and less picture-happy than I would normally like. I really need to step up my game, man... there's no way I'm going to beat Florida's "on notice" guy at this rate.

I'm letting the following people know that, for week 5, You're on Notice, Dawg! 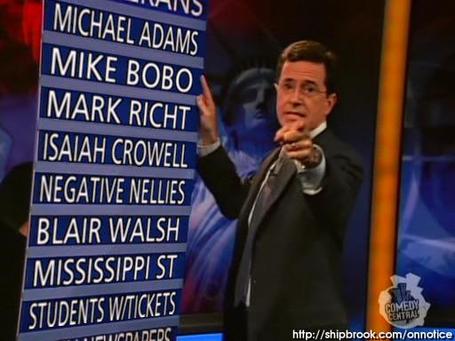 1) Michael Adams - Why Michael Adams? Because he's a jerk, has stolen money from and is a disaster for University, and everybody that has ever worked with him hates him. Plus, I have it from a very authoritative source inside the UGA administration that he was personally texting Blair Walsh after every field goal miss yesterday to tell him that he sucked and was going to get his scholarship pulled if he missed one more.

2) Coach Mike Bobo - Man, it was all going so well. Then, by his own admission in the postgame interview, he "started calling conservatively" after going up 17-0. In fact, he reverts to mega-conservative play-calling in every single game when we're ahead by 14+ points. Look, I know we ain't got Les Miles as our coach, but we can't start trying to "ice the game" in the second quarter, dude... especially against an SEC team.

And for the record, conservative play-calling isn't always a bad idea. Nick Saban's teams look positively grotesque on offense after they get up 2 scores or more. Nick Saban is not shy about relying on his defense to win games for him, however... and maybe that will work for us, too, if our defense is really that improved. I don't think we're at that point yet, though.

3) Coach Mark Richt - Coach Richt has said that he makes the decision whether to go for it on 4th down or not, not Mike Bobo. Well, if that's the case, then Coach Richt's judgment seems to be getting more and more questionable. I'm seeing more and more situations where we punt or attempt a FG on 4th down when the situation seems to call for going for it, followed by a decision on the next possession to go for it when it would be more prudent to kick it.

I admit that, now that I'm looking for it (after hearing several sources I respect state this), I have seen more and more situations in which we have simply gotten out-coached from a tactical standpoint. I have seen several questionable decisions on the field, but more than that, it seems to me that our players don't have the mental toughness and discipline on the field that other teams do have. We are not alert and aware of what's happening on every play... it's almost as if we just lack the ability to concentrate during plays. We get too easily fooled on trick plays like the reverse end-around pass and the reverse punt return that Ole Miss used to score their points. Not to mention the fake punt that South Carolina used to score a fat guy touchdown.

I don't know what the coaches need to do to change that lack of discipline, but I do know it can be coached, and it's obviously not being done. And that, ultimately, falls at the feet of the head man.

4) Isaiah Crowell - There was quite a bit of speculation on why Crowell got noticeably fewer carries in the second half than the first. I speculated that the coaching staff was trying to protect his ribs, which got dinged up during the South Carolina game. During his postgame interview, however, Coach Bobo said he took Crowell out because he was "gassed" due to the number of carries he got. Got gassed in the second half? Come on... the ball ain't heavy, son. I know he's just a Freshman, and not as well-conditioned as he will be next year... but just dang.

5) Negative Nellie's - (Or, if you prefer, Debbie Downer's) Look, we won the dadgum game, folks. We showed significant problems that need to be improved upon. That doesn't give you license to declare the entire Georgia program a failure and piss and moan about how we will never win in the SEC without doing (insert something obvious here). Because you know what? We just won in the SEC. This week will determine whether or not we can continue to win in the SEC.

But either way, bitterly complaining endlessly about the team's problems and condemning them to failure after a dominating win isn't helping anybody. Feel free to talk about what we need to improve, but keep the endless bitter attitude to yourself, please.

6) Blair Walsh - We all know why he's here. He's a senior, so I really hope he can shake it off and get back to his automatic self this Saturday... and so should you. I say that because his backup, Brandon Bogotay, is a classic example of a kicker who looks awesome in practice, but just can't take the pressure during the game. He's proven that multiple times, and I don't think he would have done any better than Walsh did on Saturday.

7) Mississippi State - Dude. What the heck, man? How are we supposed to claim that you're a really good team when we lose to you this week if you can't even beat Louisiana Tech at home without going to overtime?? Look... whatever, man. Just lose to us, ok? That'll make us both feel better.

8) Students with Tickets to this week's game - Obviously, this was not a problem at the Ole Miss game (though it looked like it was for Ole Miss' students), but I'm putting the students on notice based on their turnout for every home game thus far (especially the Coastal game, though there were some upper deck seats open during the South Carolina game, as well). I think the administration/athletic department is being more than patient in changing up the ticket system this year and working with y'all. If you simply can't show up in enough numbers to fill up 90+% of your seats, however, then we need to take the upper deck seating away and give it to paying fans who actually want to attend the game.

Unlike some folks, I actually feel good about the position we're in. This is, for the record, exactly where I predicted we'd be at this point in the season, and we did dominate Ole Miss. I'm even on the verge of declaring this week's game a tossup/win instead of a tossup/loss, though I'm not really ready to make that call yet. Ultimately, though, I'm hopeful, and I think we will continue to improve as the season rolls on.