You're on Notice, Dawg! Week 4

Share All sharing options for: You're on Notice, Dawg! Week 4

As has been said a number of times previously on this blog, yesterday's game was basically meaningless as an indicator of our team's potential for the rest of the season. Coastal Carolina is a mediocre 1-AA team, and was clearly a level or two below Georgia in both the talent and size department.

Any time you get a shutout is cause for commendation, however, even against a bad team, and I applaud the defense for completely shutting down the Chanticocks. Special shout-outs also go to fat big man Ty Frix, a 2nd-generation Bulldog long snapper who deftly lumbered down the field quickly enough to recover a muffed punt, and Blair Walsh, who started and ended a kickoff with the ball after recovering the return man's fumble. And if you were watching closely, you even saw Carlton Thomas make a nice 17-yard rush for a touchdown on a run that was not up the middle.

The impressive-looking 59-0 ledger, however, does not mean that everything went well for the Dawgs. Even on the heels of a blowout, there are major issues with the team that need to be addressed. That's why I'm letting the following people know that, as we get ready for Ole Miss in week 4, You're on Notice, Dawg! 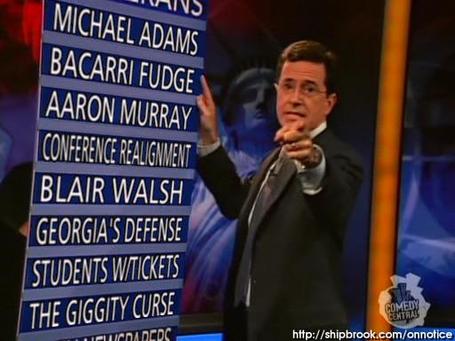 1) Michael Adams - Why Michael Adams? Because he's a jerk, has stolen money from and is a disaster for University, and everybody that has ever worked with him hates him. Plus, I have it from a very authoritative source inside the UGA administration that he is secretly bankrolling Baylor University's "Texas defense fund."

2) Bacarri Rambo Fudge - During the second quarter, Bacarri made a beautiful, athletic interception, returned it 43 yards... and then promptly fumbled it back to the Coastal Carolina offense. If there were ever a single play that encapsulated a guy's career up to that point, this was Bacarri's play. It also highlights why I still call him by his given name of Fudge, and not the name he chose for himself in high school. Everybody loves the great plays, but he has to stop following them up with the boneheaded plays before he'll ever really be great.

3) Aaron Murray - It doesn't seem to make sense to call Murray out after a 3 touchdown performance, but remember, this was Coastal Carolina we're talking about here. Aaron Murray has the tools to be one of the best quarterbacks in the country, but he consistently makes incredibly poor decisions and shows poor form. He stared down his receivers on at least 40% of his passes Saturday, and a good defense would certainly take advantage of that mistake. In addition, he also regularly throws the ball into double and triple coverage, and threw at least one ball that would have been a pick-6 against Alabama or LSU.

You know who else looked really good yesterday, and certainly better than Murray? Hutson Mason, Murray's redshirt-freshman backup. His numbers were also impressive, especially since he was doing mop-up duty, which doesn't typically involve much passing. He also didn't make a single questionable throw that I saw. If I were the QB coach and offensive coordinator (who is that, anyway?), I would seriously consider starting Mason if Murray falters again in a big game.

4) HEY Y'ALL IT'S CONFERENCE REALIGNMENT TIME!!! - Dude, really? During the season? In one of the most ACC moves ever made, the ACC moved to strengthen its basketball and lacrosse leagues and weaken its football league, and made that announcement right as College Gameday was going on the air, so everyone in the entire country could laugh in unison at the prospect of Syracuse actually being targeted by any conference.

But, you know, as long as we're changing everything around... 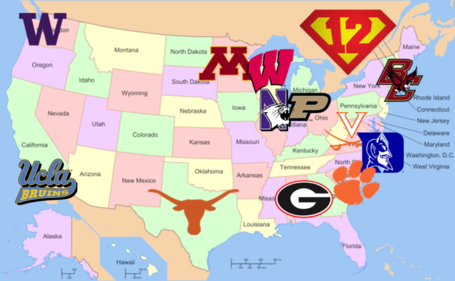 You know, on second thought, never mind. I don't think I want to be in a conference with Texas anymore.

5) Blair Walsh - I know I just gave Georgia's place kicker a shout-out for recovering a fumble on Saturday, but he is becoming frighteningly erratic in his actual day job of, you know, kicking the ball. Walsh made a career-long 56-yard field goal that would have been good from 66 yards, but he also missed his third field goal in 3 games. Fortunately, the miss didn't show up on the record, since a Carolina defender jumped and landed on a Georgia player, triggering a 15-yard personal foul penalty. Because it won't appear in the record book, it won't hurt him in the race for meaningless postseason awards.

But the more important question is: Has our Lou Groza finalist place kicker suddenly got a problem kicking the ball straight? We need a world-class field goal kicker to rely on in close games, and if we don't have one, that's not a good omen for the rest of the season.

I don't know, he's just seemed a little out of whack so far. Maybe he forgot his V8? (This picture has been lawya'd)

6) The entire Bulldog defense - Once again, it might seem odd to be calling out the defense after a shut out. One of the dangers of playing a team that you completely outclass both in talent and size, however, is that you start to coast on your natural ability, and your fundamental defensive skills start to suffer.

I saw many examples on Saturday of the "hit the ball carrier real hard and hope he falls down" tackling that has absolutely killed us in the past against good offensive teams. And against Coastal Carolina, the runners simply fell down. When you're playing Mississippi State, Florida, or Georgia Tech, however, those guys will just bounce right off your best shots unless you wrap the guy up and tackle him the correct way.

7) Students with tickets - Sadly, we have to revisit an old regular this week. I was pleased to see that this year, the administration changed the student ticketing system, allowing students to return their tickets up until a few hours before the game, and instituting a "3 strikes and you're out" system for students who don't show up at all for games and don't return their tickets.

Still, however, when the game kicked off, this was what the upper deck student section looked like: 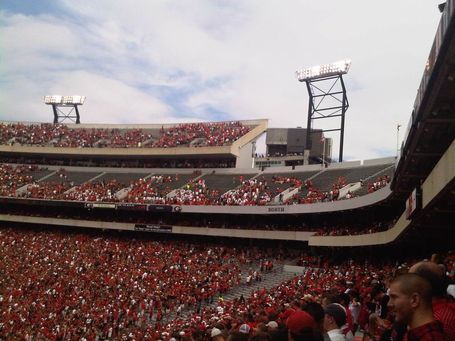 And this was what the rest of the stadium looked like. 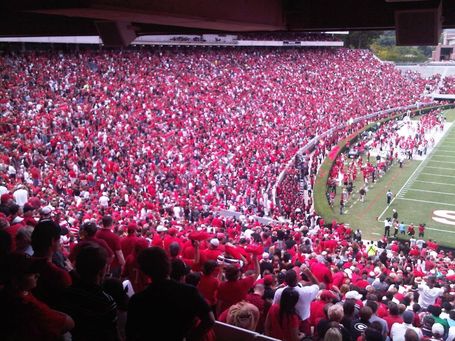 (Both pictures taken by yours truly.) This, students, is unacceptable, even for a game against a 1-AA team. You only get 6 chances over an entire year to see your team play at home... is it really too much to ask to roll out of bed, walk down the street, and get your butt in the stadium to cheer for them, at least until halftime?

8) The Giggity Curse (AKA: The Curse of Being Coached by Houston Nutt) - If you've followed SEC football for any significant length of time, you know exactly to what I'm referring. Our next opponent is the Mississippi Rebels, and they are coached by the "Right Reverend" Houston Nutt. Through his tenures at Ole Miss and previously at Arkansas, Nutt's teams have been infamous for doing two things: a) Losing to teams to whom they have no business losing, and b) Beating teams they have no business beating.

So now, a week after being humiliated by Vanderbilt (the one SEC team everybody's humiliated just to lose to in the first place), the Fightin' Ackbars stumble home to lick their wounds and face a team they should legitimately stand no chance of beating... the Georgia Bulldogs. I don't know about you, but I don't like where this is heading.

If the Georgia team that played South and Coastal Carolina shows up, we stand a good chance against the Rebels. If the team that played Boise State shows up... watch out, cause that's exactly what this guy wants.

(This gif of Houston Nutt cackling maniacally has been lawya'd.)

I'll be sitting in front of my TV on Saturday at 12:30 with baited breath and computer open to the Dawg Sports open comment thread, and I hope you will, as well!