It's finally here. The first edition of Cocktail Thursday, our game-themed tonic designed to settle the nerves and raise the voices of Bulldog fans everywhere.

I'll have more strategic discussion in tomorrow's Friday Tailgate. But suffice it to say that I believe this game will turn on two things: which team wins the battle up front, and which of the two quarterbacks performs closest to expectations.

If you go back and watch the Georgia Bulldogs' losses from last season (and God help me, I did) the play of the offensive and defensive lines, especially late in games, emerges as a constant theme. We didn't lose to Mississippi State because Washaun Ealey fumbled on his way into the endzone. We lost because we couldn't stop Chris Relf in the second half. We didn't lose to Florida because Aaron Murray threw a bushel of interceptions. We lost because when our freshman QB needed to take a step back and steady his nerves we weren't able to control the line of scrimmage and run the ball to take up Murray's slack. And we lost to Central Florida because more than one lineman looked like he didn't even really want to be in Memphis (and yes, I am getting angry just thinking about it, so let's move on).

The last time the Boise State Broncos came to Georgia they were led by a Heisman-candidate quarterback: Jared Zabransky. His day went kind of like this: 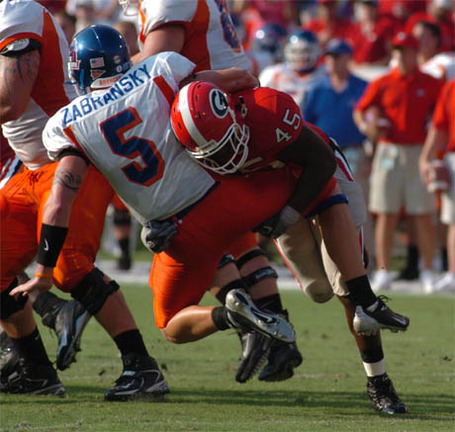 Four first half interceptions and two fumbles later Zabransky was benched by Dan Hawkins. Kellen Moore worries me senseless because he rarely gets sacked, and is almost never intercepted. Specifically, he was sacked 6 times in all of 2010 and 5 times during the 2009 campaign. That's the result of excellent play by the Bronco offensive line and even better scheming by the Bronco coaches. Moore also has 99 career touchdown passes to 19 career interceptions. Over the last two seasons Moore has been picked off 9 times in 814 attempts. That's insane.

I believe the remedy for Moore's efficient evisceration of defenses is to get pressure on him from the most direct angle: straight up the middle. Even if the Bulldog nose tackles don't sack Moore, getting a big paw in his face play after play should go a long way toward disrupting his rhythm and forcing that occasional bad decision. We then need to linebackers and secondary to cash in on those occasional lapses in split-second judgment.

And while a lot of 'Dawg fans assumed the guy leading the charge to collapse the Bronco pocket would be Big John Jenkins, his position mate Kwame Geathers enters the fall having held onto the starting nod which he gained after a dominating spring. So it's Geathers who we'll lean on to shut the Boise State fans up.  If we get a solid push from the inside out we will see our enemies driven before us and get to hear the lamentations of their women. And we'll toast to their tears with . . .

The Kwame A River.

First cut the lime and kiwi into small chunks, toss them in a tall glass with the mint leaves and then muddle them all. For the uninitiated, this is how you muddle. Add the simple syrup and rum, stir, then let the flavors mix for a couple of minutes (this step is important, I swear). Use this time to inhale a Chik-Fil-A sandwich, smoked rib, or other tailgate food of your choice. Finish the drink by adding the ginger ale and topping off the glass with club soda and as much ice as you need to keep it cold. As an added benefit, this drink is 30% less likely to put you in a diabetic coma than many of last season's sugary selections. Never let it be said I don't read the comments.

Here's hoping the Kwame A River knocks you on your rear end fewer times that its namesake knocks Kellen Moore on his. Until tomorrow . . .