You're on Notice, Dawg! Week 1

Share All sharing options for: You're on Notice, Dawg! Week 1

Ladies and Gentlemen... we have arrived. After the long, dry offseason, which has typically been marred by player departures, suspensions, injuries, and conference realignment talk, it is now officially GAME WEEK!

As you should know by now (though we can find a GREAT HYPE VIDEO for you if you don't), this week's opponent is the Boise State Broncos. The Dawgs will be kicking off in the Georgia Dome against the Ponies at 8:00 PM Eastern time.

I'm letting the following people, places, and things know that, for Week 1, You're on Notice, Dawg! 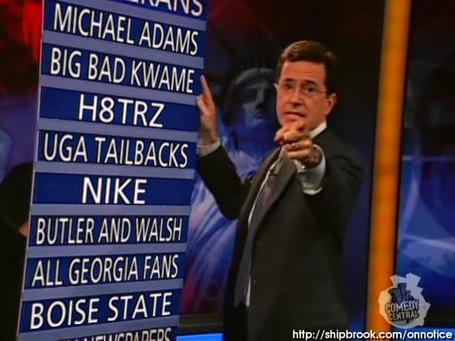 1) Michael Adams - Why Michael Adams? Because he's a jerk, has stolen money from and is a disaster for University, and everybody that has ever worked with him hates him. Plus, I have it from a very authoritative source inside the UGA administration that he designed the UGA Nike Pro Combat uniforms personally. Well mostly, that is. He actually wanted the stripe down the middle of the helmet to be bright orange instead of red because he thought it was more eye-catching, but this was vetoed by Nike. They thought it was too over-the-top.

2) Big Bad Kwame (and John) - We've covered this in great detail in the past, and it still holds true today: the key to Todd Grantham's 3-4 defense is a massive, talented nose tackle. (Big Bad) John Jenkins was recruited as a JUCO transfer to provide the Mount Cody-esque beefcake at this position, but it appears that he has a nagging hamstring injury that could make him questionable for this game. Fortunately, though, it also appears that his august presence on campus has helped Kwame Geathers step up his game at the NT position to the point where he might have started over Jenkins, anyway.

To be honest, I don't care who starts at NT against Boise, as long as he knows how to grab hamsters and throw them down to the ground posthaste. One thing is certain, though: If the Geathers/Jenkins connection is successful, Georgia's chances of winning rise dramatically. If it is not... we will have the same scars associated with the "Power Ranger uniforms" as we have with the Grambling unis. 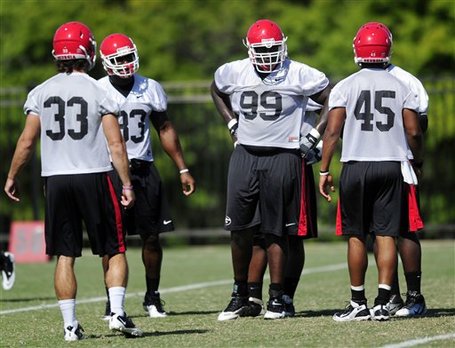 Kwame Gathers (99) looks relatively normal-sized in this picture, but what you don't realize is that he's standing across the street, while the other players are right in front of the camera.

3) People banging on the new upgrades at DawgSports - I could just say H8TRZ and be done with it... but I'm not an Auburn fan, so I won't. Kyle and MaconDawg are the proprietors here... always have, and always will be. And they've decided to open up front-page posting privileges to a handful of regulars who have been here a while, and with whom they feel (relatively) comfortable in the quality of content that will be provided.

Will there be missteps? You can bet on it. Will there be times when you look at a front-page story and say, "What the (redacted) is this? This isn't the quality of article I'm used to seeing from T. Kyle King and Macon Dawg!!" Without a doubt.

As someone who is included in that group, however, I can only ask your forbearance and understanding as we all get used to the new arrangement. We are not as good as Kyle at this thing, and have not been doing it as long as he has. Constructive criticism is always welcome and appreciated. Just commenting, "You suck," however, will earn you scorn and, potentially, a warning. Our goal is to foster a community here, not a replica of the message boards at ajc.com (and virtually every other newspaper website).

4) Caleb King Washaun Ealey Richard Samuel Carlton Thomas Isaiah Crowell Whoever the hell is running the ball for Georgia - In January of this year, we would have looked forward to this game and felt that the running back position was one of our greatest strengths. Now, it's just another position at which our depth varies somewhere between hairline-thin and nonexistent. Depsite the adversity, however, our tailback(s) need(s) to step up, find another gear, take the ball when Aaron Murray offers it to him/them, and do what comes naturally.

Hey, the ball ain't heavy. (This picture has been lawya'd.)

5) Nike's Department of Weird-Ass Uniforms - Ok, we all kind of expected that Georgia's Pro Combat uniforms would be hideous (or, at least, I did), and they are. And make no mistake, the whole "helmet stripe as an homage to Bloody Erk" thing is the retcon of all retcons. If that's what Nike had intended, they would have said it in their initial press release. They just got lucky that some random feature of the uniform happened to match up to one of the most famous images of a man who is arguably Georgia's most popular assistant coach of all time.

So, anyway, we could have expected the uniforms to be ugly, but then Nike goes and give Boise State the badass uniforms with one of the four horsemen of the apocalypse on the helmet? Dude... that's just wrong. The only positive thing I can say is this: At least Nike gave Boise virtually no orange on their uniform whatsoever. Nobody likes to wear (or see) that insipid color.

Gorram Nike should have shown Georgia for the Browncoats we are and gone with one of UGA's first-ever uniforms from 1894.

(This picture has been lawya'd)Ladies and Gentlemen... your 1894 Georgia Bulldogs. (Death to the purplebellies.) (And Florida, the place to where all purplebellies retire.)

6) Drew Butler and Blair Walsh - You might ask why I'm putting Georgia's kickers on notice, when virtually everybody agrees that they're the most solid, dependable positions on the team. This is precisely why they are on notice. With a brand new WR corps and a pull-a-name-out-of-a-hat backfield, we are going to need Drew Butler to continue his established habit of flipping the field single-handedly with a 65-yard punt from the 15 yard line. And with Boise State's well-documented field goal woes, we need Blair Walsh to be just as rock solid has he as been in his entire Bulldog career to date. Inside a climate-controlled environment with no wind, we need any field goal inside of 55 yards to be automatic.

With so much of the team around them flapping uncertainly in the wind, we need the kicking game to be the special teams bedrock upon which we can build the rest of a dominant game. We need a Ray Guy Award winner and a Lou Groza Award finalist on Saturday night.

7) Every Georgia fan going to the Dome - Ok, this one is serious, y'all. The Georgia Dome seats 71,000 people, and Georgia received about 50,000 of the tickets. This means that there will be at least 30,000 less Georgia fans than normal cheering the Dawgs on this week. Whether you like the Nike Abomination Uniforms or not, it is our duty to make Boise State feel like they are playing in front of 500,000 crazed, rabid Bulldog fans on Saturday night. From the moment Georgia hits the field to the moment the clock reads 00:00, you need to be screaming your fool heads off when Boise has the ball, and not even speaking up to ask your buddy to get you a(nother) beer when Georgia has the ball.

I know Georgia's fans can rock the Dome to a decibel level approximately that of a jet engine; I witnessed this in person during the 2002 SEC Championship Game when Georgia blocked Arkansas' first punt. We need to drive that level of craziness and volume all game, folks. Make those kids from Boise wish they'd stayed west of the Mississippi! It's time to bring it, SEC style!

(This picture has been lawya'd)
Sort of like this guy, except vocally.

Enjoy our first game week of 2011!! And for those of you who will not be fortunate enough to be in the Dome on Saturday night, make sure you're doing your part in your own locale to help cheer the University of Georgia on to victory!