Share All sharing options for: Why the Boise State Broncos' Nike Pro Combat Uniforms Are Worse than the Georgia Bulldogs'

As noted by TheDeu, Year2 has designed the game plan by which the Bulldogs can beat the Broncos, but you and I both know that your focus is where midgeorgiadawg’s focus is; namely, on Boise State’s Nike Pro Combat uniforms, which are all-white with blue and orange highlights and super-sized horses on the helmets.

There appears to be an emerging consensus that the Broncos’ Nikefied duds are superior to Georgia’s controversial Pro Combat togs. I beg to differ. Consider the following:

White is a perfectly respectable color, but, cinematic conventions concerning readily identifiable good and evil characters aside, there are problems with this uniform. For one thing, any outfit featuring orange accents is butt-ugly, by definition. Likewise, there’s a problem with wearing white pants on a football field, and that problem is this: 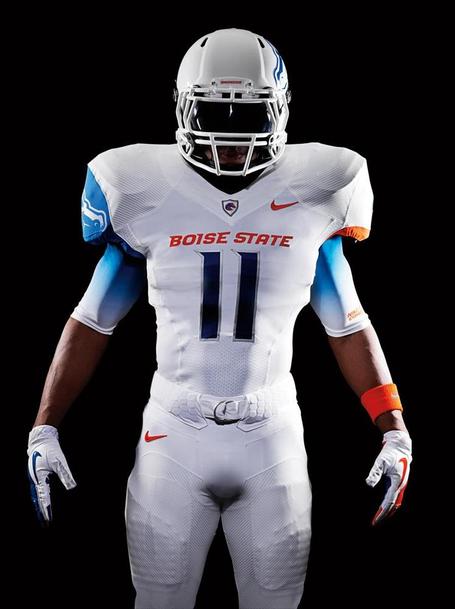 Dude, that picture is borderline-NSFW. Admittedly, the overhead lighting isn’t helping matters, but let’s just say that, if tankertoad exhorts a BSU player to "hike the ball into [his] own junk" during the game night comment thread, the Bronco in question will have no difficulty complying. Nike did everything but give Boise State a crotch-swoosh for targeting purposes. Do you remember where Burt Reynolds was able to aim his passes against the white-clad prison guards in "The Longest Yard"? Well, now you know why.

To top it all off (literally), there are these helmets: 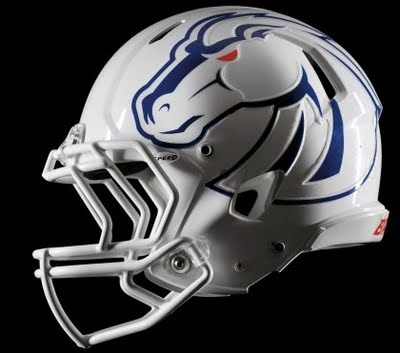 Is it just me, or does that helmet ring a bell? It was a long time ago, so I’m fuzzy on the details, but I seem to recall that it was back in the ‘40s, when I was the head of the Woltz International Pictures studio, and I refused to cast Johnny Fontane in a movie, and Tom Hagen paid me a visit at my home in Los Angeles, and I probably wasn’t as courteous to him as I should have been, and I woke up one morning, and, under the covers, I found . . . ahhhh! Ahhhhhhhhhhhhhhh! Ahhhhhhhhhhhhhhhhhhhhhhh! That helmet! That helmet!

I’m not claiming to be a fan of the Bulldogs’ Nike Pro Combat uniforms, but I by no means concede that the Broncos’ are any better. This is going to be an all-out battle for 60 minutes on the gridiron, so I’m not giving any ground on any of the points of contention off the field, either.