The launch of SB Nation's iPhone app has been announced hither and yon.  The app itself can be downloaded here from iTunes free of charge.  Now that I've had it for a few hours and played with it some, I offer my thoughts.

I offer a few caveats first.  (1) I have just enough technical knowledge to be dangerous.  (2) I studied political science and French at UGA.  Even if there were real "science" in "political science", I got very little of it, since my emphasis was on theory.  I am much better prepared to discuss cities of God, social contracts, "thou shalt" dragons, and (perhaps especially) le meilleur des mondes possibles than anything I'd consider to be science.  (3) I love user manuals.  I read them cover to cover.  I find it a great sadness that technological advances have resulted in a world where so many of the products we buy (or, in this case, download for free) are boxless and manualless.  In this particular case, the app's use is self-explanatory enough that it does not matter, but still: I miss manuals.

With those warnings out of the way, on y va.

The app does an excellent job of exploiting iPhone features.  It feels nice and native, and navigating with taps and swipes is intuitive.

Now, I recognize that all of y'all who have iPhones will have downloaded the app and played with it already, and those who don't have iPhones may not care.  But technology is cool, and Kyle really needs to be convinced to get a smartphone.

Launching the app takes you to the Newsfeed. 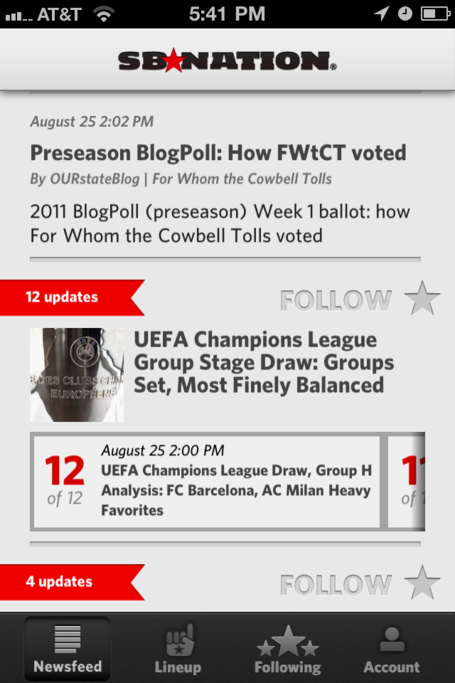 You just scroll down the page to view headlines.  For stories that have updates, you can scroll horizontally through the last several updates and navigate to each one.  If it's a topic you find sufficiently interesting, you can mark the little "Follow" star to make it easier to go straight to that story line later, comme ça. 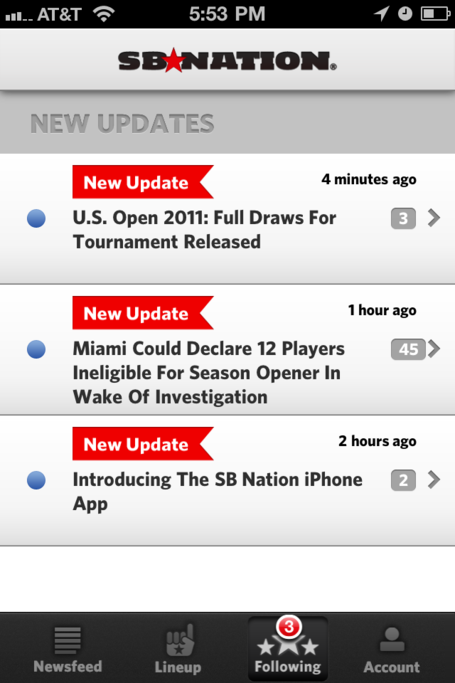 From here, you can get the latest updates from all over SB Nation on the stories that are of particular interest to you.

But the part that I suspect will be most useful to me is the Lineup. 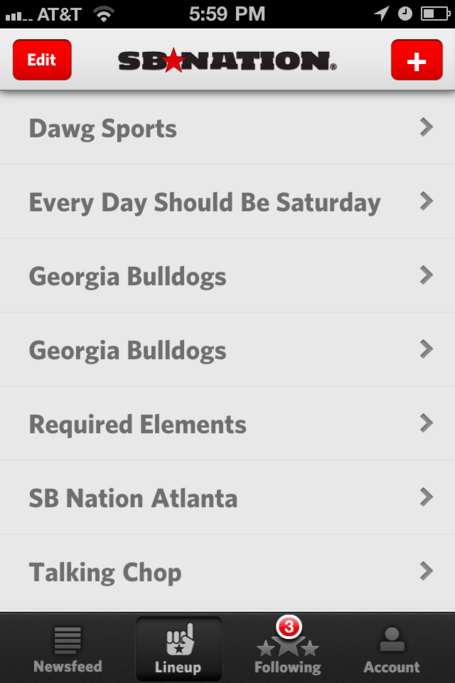 Here you'll get a list of your favorite blogs and/or sports you compile from SB Nation's lists.  I have two "Georgia Bulldogs" because one is for football, and the other for basketball.  They need to work on that.

From there, navigation to the individual blogs or teams isn't very exciting, but reading and commenting is extremely simple and straightforward.

I already find myself navigating back and forth on my iPhone between the mobile site and the full site, depending on what it is I want to do or see.  And I likely still will access the full site through Safari from time to time.  But as this app's functionality grows, I suspect I'll do that less and less.

Basically, what we've got is a very handy and easy way to read and post comments.  We've got a pretty nifty way to personalize what stories you want to follow and what blogs/teams you want to get to quickly.  Honestly, that's enough to make this a useful app.

I would like to see a few more things, though.  These really aren't complaints.  I'm sure more features will come, but I reckon I might as well record my wish list here.  These are relatively modest suggestions.  I can think of several more things that would be much more ambitious.

All in all, solid product, lots of potential, and another way my phone can waste my time.

Technology is fun!  Get you some!