As I notified you a week ago, the Maple Street Press 2011 Georgia Bulldogs preview is available for pre-order. Ordinarily, I would’ve simply left it at that, but, since my SB Nation colleagues at Rocky Top Talk have given the Volunteers’ MSP annual front-page treatment, I thought a similar degree of thoroughness was warranted here, so set aside your Mississippi bacon recipes for a moment and heed the wisdom of Year2, who saved the best for last. 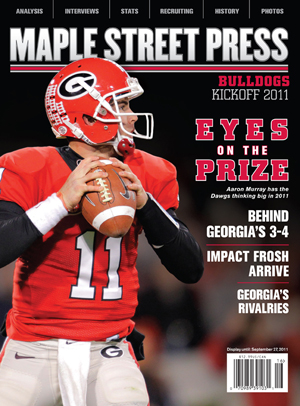 As an extra added bonus, there is the fact that many of the articles were authored by regular Dawg Sports contributors under their own names, so you can read their pieces and try to figure out their secret identities! Please feel free to indulge your consumerist impulses by clicking here.