We’ve taken a cursory look at the Diamond Dogs’ opening opponent in the Corvallis Regional, the Creighton Bluejays, but attention ought also to be paid to the host squad for the opening round of the NCAA Tournament, the Oregon St. Beavers. Though I am less than enthused about the 2,200-mile trip to the Pacific Northwest---I had been hoping for the Atlanta or Clemson Regional, so I could take my son to a game---but Georgia has significant recent history with Oregon State on the diamond, so a brief trip down memory lane is in order as we prepare for the possibility of a regional showdown between the Bulldogs and the Beavers.

It was Oregon State that eliminated Georgia from the 2006 College World Series, after all, and the Pac-10 squad swept a three-game series in Athens the following year before taking two of three from the Red and Black in Portland in 2008. During the previous three seasons in which these two teams met, one or the other of them reached the finals in Omaha all three years.

The Beavers, winners of back-to-back national championships in 2006 and 2007, take their baseball pretty seriously. How seriously? So seriously that SB Nation’s Oregon State weblog is hosting an NCAA regional bracket challenge and the school’s official athletics website features this deeply disturbing greeting: 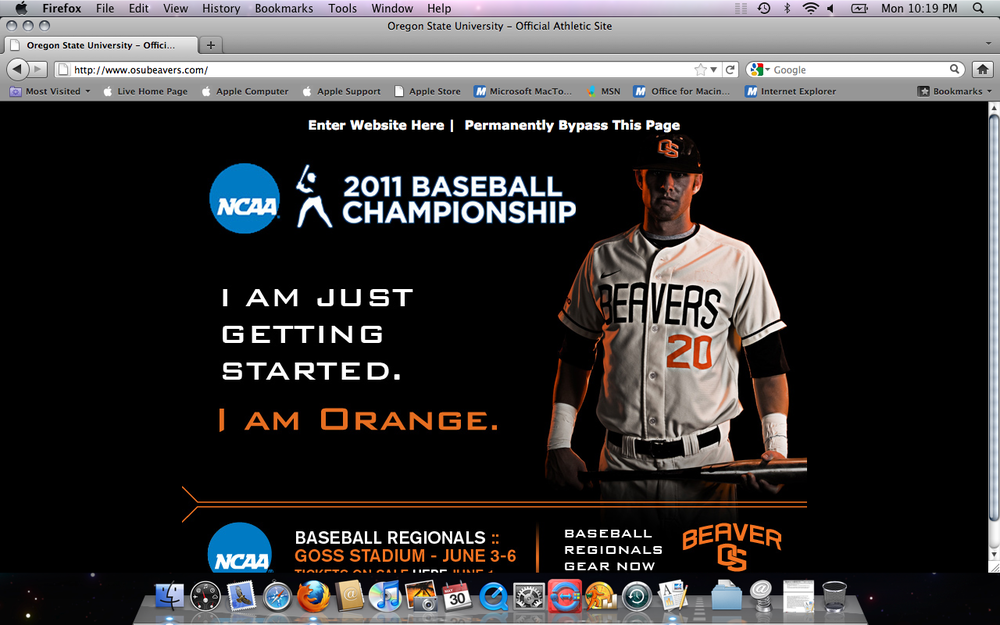 However, OS ended the season on a skid, dropping six of their last seven outings, including five straight. The Beavers’ next win will be their first since May 20, and Oregon State’s losing skein has included two three-run decisions, a five-run setback, and, most recently, a six-run loss. OS has lost five of its last nine outings in Corvallis, which could become the fourth different city to have hosted a Georgia-Oregon State baseball game in the last six seasons.

Georgia will open the regional against Creighton at 1:00 p.m. on Friday, with the winner advancing to play whichever team emerges from the clash pitting Oregon State against Arkansas-Little Rock at 6:00 p.m. on Saturday. Of course, those start times are Pacific, which would put them at 10:00 a.m. and 3:00 p.m., respectively, in the Eastern time zone. This has been your daily reminder that the NCAA hates Bulldog Nation. Seriously, a 10:00 a.m. body standard time first pitch as a No. 3 seed on the opposite side of the country? What, like suspending A.J. Green for selling a jersey and leaving Michael Adams in Athens weren’t bad enough?