A week ago, The Inaugural Georgia Bulldogs Hate Index debuted in this space. (Easter having come and gone in the interim, I should add that sports hatreds are not hatreds in the strictest literal sense; I hate Auburn, vineyarddawg hates Florida, and NCT hates Georgia Tech, but none of us holds the Bulldogs’ most despised rivals in the same genuine contempt reserved for, say, totalitarianism or cancer or murder. I don’t want anyone thinking we revile our fellow man around here, particularly since certain fan bases tend to get a little touchy when you ask whether their head coach is lying or ask whether their head coach is telling the truth. If a fellow owns up publicly to being an Auburn fan, I will hate the sin and love the sinner, while earnestly hoping he will repent of his misguided ways, as the road to perdition and probation is paved with orange and blue.)

As of this writing, 298 votes have been cast regarding the initial list, with a whopping 43 per cent deeming Steve Detwiler least worthy of our contempt. Another 18 per cent would opt against including Tim Tebow, with 12 per cent favoring Michael Adams’s removal from the condemned. The remaining quintet, from most to least despised, consisted of Urban Meyer (2%), Florida (3%), Auburn (5%), Steve Spurrier (6%), and Georgia Tech (7%). Since I agree with NCT that it’s hard to be a Georgia fan without intensely disliking the rival that inspired a Bulldog fan to write a book called Clean Old-Fashioned Hate, I’m considering the three leading vote-getters out of the running and the five left over still among the contenders.

We will return to those prospects in a subsequent balloting, though. For now, since we have revulsion aplenty in Bulldog Nation, I offer a completely new (and conspicuously Gator-free!) list of possibilities: 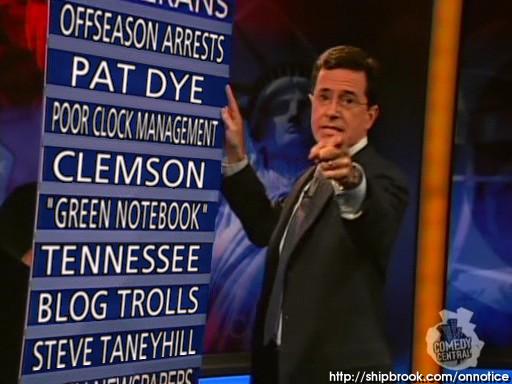 While I don’t think any of these should require explanation, I didn’t think anyone would have forgotten Steve Detwiler and his magical thumb of doom, either, so, just to be on the safe side, here is the rundown:

Vote in the poll and lobby in the comments!