One night after No. 9 Georgia Tech eked out a 5-3 baseball win over No. 28 Georgia in Atlanta to take the Engineers’ second straight series win over the Bulldogs this season, No. 4 Georgia took on No. 23 Georgia Tech in Atlanta with the goal of taking the Red and Black’s second straight softball series win over the Old Gold and White. In an outing heavy on home runs, the visiting Athenians carded a 10-8 victory, in spite of being out-hit (12-9) and committing more errors (1-0).

Although third baseman and USA Softball Collegiate Player of the Year finalist Alisa Goler and first baseman Brianna Hesson both drew walks in the top of the first frame, the Athenians were held scoreless in their first turn at the plate. The Atlantans, by contrast, used a single and three home runs to take a 4-0 lead in the home half of the canto, forcing starter Erin Arevalo from the circle after three hits, three earned runs, and two-thirds of an inning.

The visitors’ half of the second stanza got underway when catcher and NFCA Division I National Player of the Week Kristyn Sandberg was hit by a pitch, then second baseman Ashley Pauly doubled to put two aboard for center fielder Taylor Schlopy, who drove a three-run shot to left field. The Yellow Jackets stranded a pair of baserunners in the bottom of the inning, while the Bulldogs went three up and three down in the top of the third frame.

Once the Ramblin’ Wreck stranded a baserunner in the home half of the canto, the Red and Black knotted the score in the fourth stanza on a solo home run by Pauly. Georgia Tech, however, retook the lead in the bottom of the inning, using four singles to plate a pair of runs. Georgia retorted with a leadoff single by left fielder Megan Wiggins in the top of the fifth frame, resulting in a run on a Sandberg groundout.

The Golden Tornado answered with an unearned run in the bottom of the inning which came on an error, a fielder’s choice, and an RBI base hit. The visitors came right back in the ensuing stanza with a leadoff double by pinch hitter Christine Olney and a one-out single by Schlopy to make the score 7-6. Goler thereafter drew her fourth walk of the night, and Hesson her third, to load the bases for Wiggins, who reached on the fielder’s choice that saw Schlopy thrown out at home.

This gave designated player Ashley Razey the chance to be the hero, and she availed herself fully of that opportunity by sending a grand slam to right center field, thereby staking Georgia to its first lead of the game. Georgia Tech’s only baserunner in the host squad’s turn at bat was a hit batsman batgirl, while the Bulldogs were retired in sequence in the seventh frame on a lineout, a groundout, and a strikeout.

While the contest was more harrowing than it had to be, Georgia regrouped following a shaky start and continued to battle back until the victory was secured. We may be struggling against the Yellow Jackets in baseball lately, but the Red and Black clearly are the better team in softball, and, for what it’s worth, at least we don’t have to push football season tickets in mid-April: 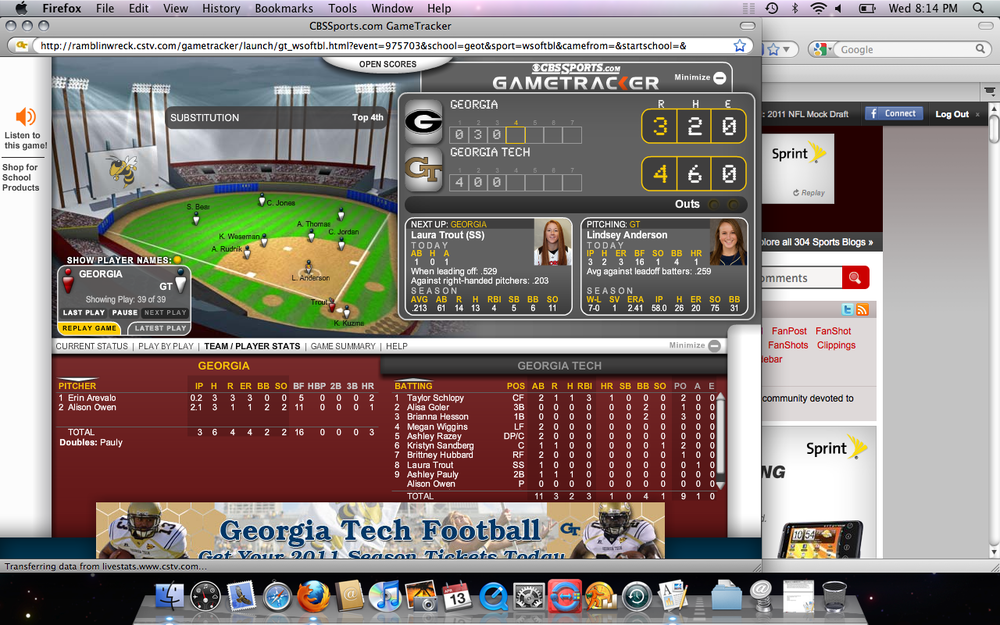