Georgia Bulldogs Basketball, Recruiting, and Mark Fox: Is the Man Ready to Meet His Moment?

Share All sharing options for: Georgia Bulldogs Basketball, Recruiting, and Mark Fox: Is the Man Ready to Meet His Moment? 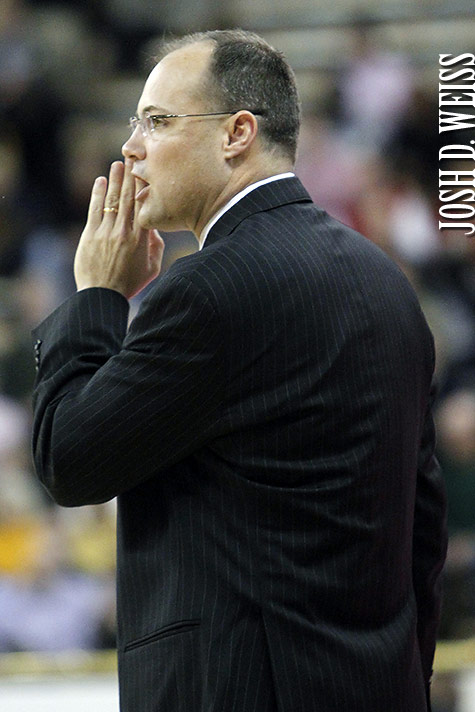 Thank U to our players 4 being people we can be proud of & 4 a good season. Thanks to the Dawg nation 4 the support.

It’s a good time to be Mark Fox. For the first time since the last year of the Tubby Smith era---for the first time since the last year I was enrolled as a student in Athens---a Georgia basketball coach has guided his team into an NCAA Tournament field without the need either for wrongdoing that cannot be tolerated or for a fluke that cannot be duplicated. The last time we were where we are now, the Georgia Bulldogs were standing on such solid ground that the Kentucky Wildcats saw fit to swoop in and steal our head coach.

That will not be happening this time. The most storied SEC hoops program is happy with its coach, bound for the Sweet 16, and planning to knock off the top-seeded Ohio St. Buckeyes. Granted, there are programs that would be prepared to poach Coach Fox if they could, but the rumors linking Coach Fox to the N.C. State Wolfpack vacancy were recognized right away as lacking in seriousness by Georgia fans and N.C. State fans alike.

This is, in short, a time of staff stability in Stegeman Coliseum, which is producing recruiting coups and offering hope for future success while we wait to learn what Travis Leslie and Trey Thompkins will choose to do. Even as we prepare for life after the loss of the Bulldogs’ latest leaders on the court, we are confident both in our coach and in the likelihood of his longevity in the Classic City.

The timing of this is fortuitous, as two of the Red and Black’s closest geographic rivals, the Georgia Tech Yellow Jackets and the Tennessee Volunteers, are changing coaches. While the situations at The Flats and on Rocky Top are radically different, both programs are in turmoil, and Georgia should be poised to reap the benefits of those upheavals, which should put key players back on the board. Coach Fox already has been beating out Alabama, Tennessee, and Xavier on the recruiting trail; with a few more strong signees and a little more depth, the Bulldogs will be beating the Crimson Tide, the Volunteers, and the Musketeers on the hardwood, as well.

This is, however, a critical moment. We have, after all, been on this road before, or thought we were, only to discover every time that, somewhere along the way, we had taken a detour. Hugh Durham’s Final Four was not a harbinger of deep tourney runs to come; Tubby Smith’s opening act proved to be an audition for a better job; Jim Harrick’s house of cards predictably, and deservedly, came crashing down; Dennis Felton’s wild ride to the SEC championship was illusory and unsustainable. This could be the start of something big, or it could be the latest mirage shimmering on the horizon, tricking us into believing that the league’s least accomplished men’s basketball program at long last is nearing the end of its long journey through the desert. Years hence, we may honor Mark Fox with epic films starring Peter O’Toole, but, then again, we also may find ourselves commemorating his tenure by writing short poems about two vast and trunkless legs of stone. It could go either way.

Which way it goes, though, will not be a mater of happenstance or destiny; the result will be governed by luck only to the extent that luck is what occurs at the intersection of preparation and opportunity. Sporadic success can happen in random bursts touched off by tornados and suchlike; long-term accomplishments in sports are built upon foundations containing a combination of coaches capable of building a program, players prepared to perform at the highest level, and administrators willing to provide the resources with which to achieve. Georgia football has enjoyed this confluence of circumstances for lengthy periods and on multiple occasions, but it is open to debate whether Bulldog basketball has ever possessed all three components simultaneously, much less routinely.

The administration’s dedication to funding success on the hardwood is there, to an extent probably not seen since Joel Eaves, the former Auburn Tigers basketball coach, presided over the dedication of the Coliseum briefly known as "The Tub" and now christened in honor of Herman Stegeman, who organized the first Southern Conference basketball tournament in 1921 and saw the Bulldogs win the league tourney in 1932, the year after he stepped down as the team’s skipper. The correct coach now appears to be on the job, as well, as Mark Fox generally has handled the recruiting, game planning, game managing (occasional time out snafus notwithstanding), and public relations aspects of his job skillfully; certainly, we have not had a basketball coach---all right, a men’s basketball coach; let us give Andy Landers his due---who handled all those duties as well as Coach Fox has at least since Coach Durham, and even Coach Durham only in his earlier years. (None of Coach Durham’s last ten teams made it past the first round of the NCAA Tournament, and only three of them finished with a winning record in conference play.)

Yes, I know Coach Fox hasn’t taken the Bulldogs past the first round of the Big Dance, either, but the 2010-2011 season, while representing one small step for this Georgia team, could also serve as one giant leap for the Georgia program. If (and this is a large and significant "if") Coach Fox can capitalize on the recruiting opportunities afforded by the Bulldogs’ present success and by the difficulties afflicting the Red and Black’s nearby rivals---if Mark Fox can bring in a basketball recruiting class that prompts Mark Richt to honor his colleague’s achievement in the university’s other revenue sport (though, it is to be hoped, not with a uniform gimmick)---we may have all three of the critical ingredients for sustained success on hand at the same time.

Is Georgia basketball the same flash in the pan it historically has been, even on its best days? Experience has taught us to answer this question cautiously; if we are compelled to assign a grade, we must conscientiously give an "incomplete" instead of an "A." Hope, however, has been restored, and the chance for more is before us. Whether, and how fully, the Red and Black will avail themselves of that opportunity have yet to be seen, but we will be offered an inkling by the caliber of the athletes who opt to spend their college years in Athens. With Paul Hewitt and Bruce Pearl no longer on duty in the fertile Atlanta recruiting ground, it is time for Mark Fox to raid the henhouse.