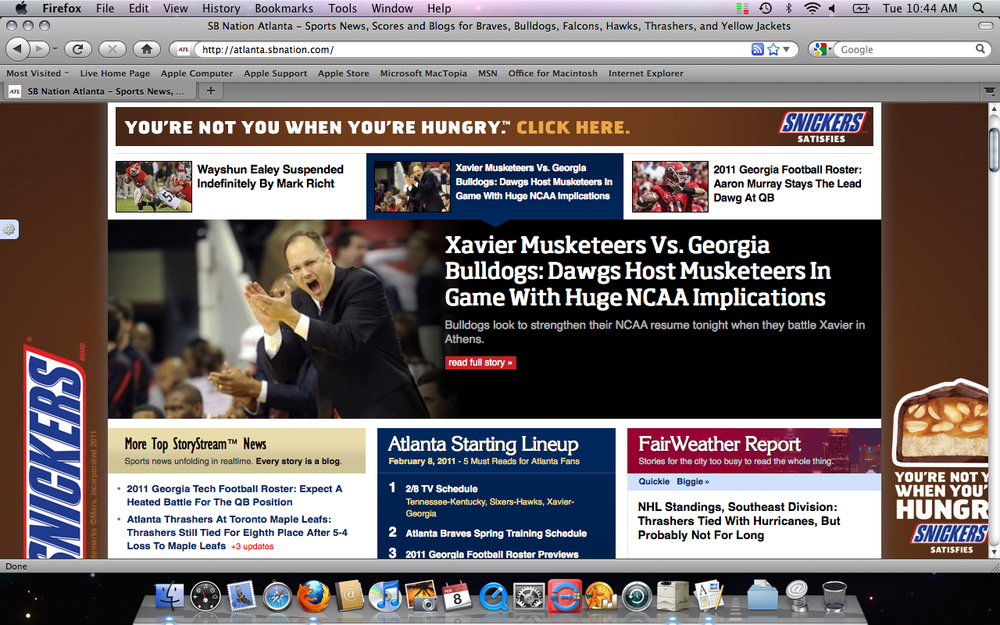 (The above screen shot has nothing to do with anything, really, but I just thought it was funny that the front page of SB Nation Atlanta simultaneously featured a wraparound ad for Snickers and a headline that used the word "Musketeers" twice.)

In a marquee TV game with major NCAA Tournament implications for both teams, Mark Fox’s Georgia Bulldogs came up short in a 57-65 showdown with the Xavier Musketeers that was closer than the score indicated.

Amid rally towels in the lower bowl of Stegeman Coliseum and a reported halftime performance by a red panda, the combatants waged a back-and-forth battle featuring multiple lead changes. For approximately the first 35 minutes of the contest, neither team enjoyed an advantage as large as six points. The game got away from the Bulldogs at the end, though, particularly when several key players for Georgia got into foul trouble. Trey Thompkins finished with more fouls (5) than points (4).

This game was big, and this performance was a big disappointment. The Red and Black needed the quality victory this contest could have provided them, but, instead, they failed to make the most of their size advantage, neglected to augment their athleticism with intelligence, and played a slipshod desperate game after their 27-26 halftime lead evaporated. Oftentimes, neither team looked like it really wanted to win the game.

The Bulldogs are 5-5 since the start of January, and they are still looking for their 17th win of the season. Georgia has seven games remaining, four of which are on the road and three of which are against teams that have beaten the Red and Black already this season. To call an NCAA Tournament bid a long shot at this point would be charitable; if the Fox Hounds couldn’t win this one at home, there may not be a win left on the schedule against anyone other than LSU, and even bad Bayou Bengal teams cannot be taken for granted for Georgia.