Partially overlooked amid the stellar late additions to the Georgia Bulldogs’ 2011 recruiting class is Nick Marshall, whose path to Athens was formalized earlier today, when he submitted his signed letter of intent. While attention was paid to the event by Seth Emerson, it is important to note how Marshall came to be a Bulldog, because in that story there are lessons the Red and Black would do well to remember in future recruiting efforts.

Here at Dawg Sports, we have taken a particular interest in Marshall’s recruitment, owing in no small measure to the fact that Wilcox County is the place many members of my family call home. Here, in fact, is a photograph of my cousin with Nick Marshall at this morning’s signing ceremony: 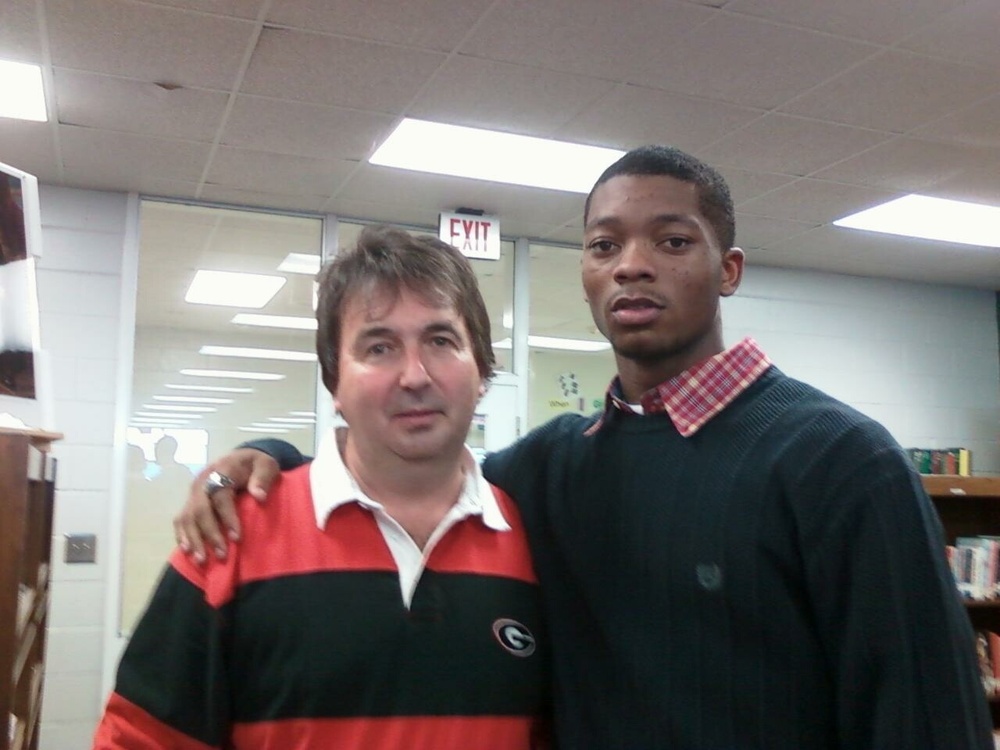 In some respects, it was Da’Rick Rogers’s eleventh-hour defection to the Tennessee Volunteers a year ago that started the dominoes toppling, producing a surprise scholarship offer to Lonnie Outlaw, who "makes Fred Gibson look like a girl." Outlaw is Marshall’s cousin, and the Bulldogs’ commitment to Lonnie likely aided in securing Nick’s commitment to Georgia as a two-sport athlete capable of playing for Mark Richt and Mark Fox alike.

As noted in one of our signing day comment threads, the Wilcox County Patriots feature additional prospects from within the same family that produced Marshall. Junior Quez Mahogany is Nick’s half-brother (and another two-sport star), while the new Bulldog signee’s cousin (and Outlaw’s half-brother), Jonathan "Bug" Howard, is a sophomore.

Yes, it gets a bit confusing keeping track of who is related, and how, thanks to the cousin and half-sibling relationships which call to mind Dennis Miller’s joke that every actor in "Young Guns" was Martin Sheen’s son, but no two of them had the same last name. (With last names like "Outlaw" and nicknames like "Bug," they all also are candidates for future inclusion in the Georgia all-name team.)

When arguing in favor of keeping the World’s Largest Outdoor Cocktail Party in Jacksonville, I have asserted that the future of Bulldog football is as dependent upon getting Baileys out of Folkston as it is upon getting Stinchcombs out of Lilburn; those of us who grew up in the metropolitan Atlanta area (and I am one of them) would do well to remember that the institution in Athens is not the University of North Georgia. West Georgia, South Georgia, and North Florida all are well represented in the 2011 signing class, which bodes well for the future. The more successful Mark Richt and his staff are at coaxing elite athletes out of Columbus, Moultrie, Rochelle, and Valdosta, the more wins we will see the Red and Black record when taking the field in Auburn and Jacksonville.