I finally got around to seeing a basketball game live this season.  I'm afraid I can't offer any insightful analysis of the Bulldogs' 16 February loss to the Commodores, because I am not competent to do so.  I'll offer a few thoughts, but you'll have to look elsewhere for reasonable (or un-) thoughts on what went wrong and what it means for the season as a whole.  What you'll get here, should you proceed, are some unnecessary facts and general observations about the road trip.  I may never be asked to give a report again.  It probably won't stop me.

Yesterday, I quietly left my Marietta office early so I could pick up my Specific Interest at home in Midtown Atlanta and get through Gwinnett County before outbound traffic became unbearable.  I find travelling through Gwinnett at any time barely tolerable; doing it in bumper-to-bumper traffic is hell.  Along about Ponce at Briarcliff/Moreland (no I-85/316 for me, thank you), I put the R.E.M. playlist on shuffle, and I was ready to go.  The R.E.M. playlist consists of Murmur through Out of Time.  I've considered slicing the Warner Bros. albums off, but I really like "You Are the Everything", "Half a World Away", and a few others, and I have moral objections to dividing albums, even if I'm listening to the tracks in random order.

We got to town and went straight to Stegeman Coliseum, approaching by way of the By-Pass, College Station Road, East Campus Road, and Carlton Street.  I think this approach is one of the least interesting and most sterile that Athens has to offer, but even the sight of the intramural fields is enough to make me happy.  I think there's something about the layout of Athens and the campus.  Once my body is physically oriented in it and to it, something chemical happens in my brain, and I'm a happier person just for being there.  It's kind of like Indiana Jones's positioning of the Staff of Ra so the sunlight will pass through it just so.  My person responds to the geography and architecture of Athens in a way that focuses my state of mind in a positive way.

We went straight to Stegeman Coliseum to allow plenty of time to check out the facility improvements.  I'm an aficionado of modern architecture (but by no means a connoisseur).  I've always been very fond of the Coliseum and, in foolish youth, visited the top of its roof a few times.  I'd been favorably impressed by pictures of the new exterior.  It did not disappoint in person. 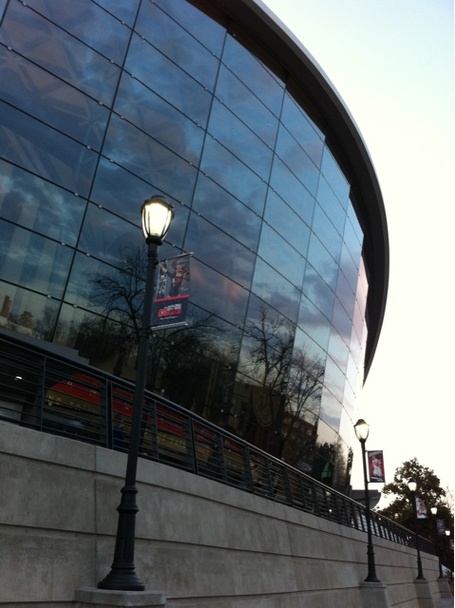 What's that reflected in the glass?  Is it a Man Ray kind of sky or the saddest dusk I've ever seen? 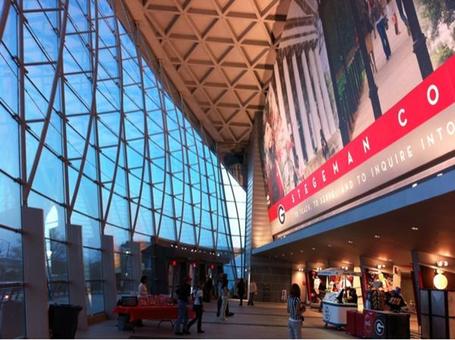 This is the point at which I began to feel like a tourist.

The bathrooms, by the way, are very nice.  I opted not to take pictures.  I do miss the giant bowl sinks in the middle of the men's rooms, though.

Warning: Here's where I attempt to write just a little bit about basketball.  It won't take long.

The game itself was fun.  I was surprised that we took and held a lead shooting three-pointers and jump shots when I'm accustomed to watching us pound it at the post.  I couldn't imagine we could win a game scoring like that, but we maintained the lead and widened it in the second half, so it was tough to complain.  Even so, the way we were scoring and the way Vandy was not, I felt the entire time that this couldn't last.  I knew I couldn't count on both teams to keep behaving so contrary to form.  And then their (Jenkins's) scoring appeared, and ours disappeared.  But you know the rest of that story. 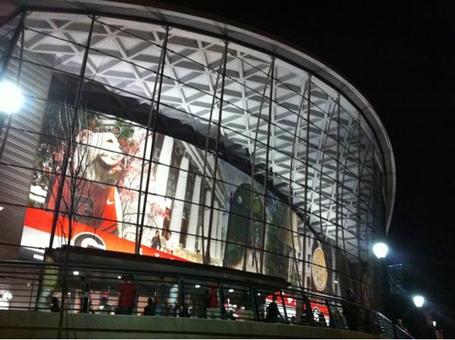 I haven't read all of the game thread, but I read Kyle's Instantaneous Ill-Informed Roundball Wrapup and the comments thereto, and I have a few thoughts.  First, losing makes people irritable.  Their words become sharp.  It's good to see that everyone simmered down.  Second, I really appreciate the observations that we know our program is headed in the right direction when we can be so upset about losses like this when losses for most of the past generation or two (or eight) weren't noticed all that much.

Finally, for what it's worth, even though I've been to some disappointing athletic contests in the Classic City over the past 40-something years, I've left Athens crying exactly twice: once when I left for the last time after receiving my bachelor's degree (I was still sobbing off and on as I drove past the Newnan exits on I-85 -- this is truth) and a second time when I left for the last time after receiving my law degree.  I've been made cranky and upset by losses, but the disappointment is ameliorated by just being in Athens when I'm fortunate enough to attend the games in person.  And this time, the positive from the experience of being there far outweighed the unhappiness from the game itself, as has been the case always no matter the sport.

As I watch games on television in the future, I'm going to try to remember that there are things about being a Georgia fan and alumnus that are more enjoyable than even winning games.  Or maybe I should try to construct a scale model of campus around my apartment.