Sobering up on Sunday: Shod with Shame

Share All sharing options for: Sobering up on Sunday: Shod with Shame

Warning: There is profanity in this post. Not-safe-for-children profanity.

I was initially going to post this at 8:00 Sunday morning, but it's now Sunday, so I'm going to go ahead and just post this now. In his post, Kyle sounded a very encouraging tone. And I agree with him in one way: the future could be bright for this team. That optimistic assessment must at least somewhat be called into doubt, however.

Let me state two facts I believe to be incontrovertible before we proceed.

2) No one should be calling for any coaches to be fired because of this game. The final score is not a reflection of the job done by any member of the coaching staff.

No, there is no shame in simply losing to a team that is both clearly superior and clearly the best team in the country. There are players on our team that should be ashamed of themselves, however, and should be as pissed with themselves as I am with them now. These are they: 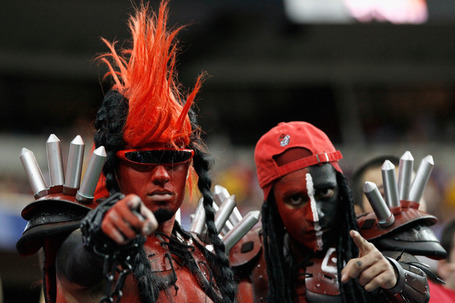 Listen up, because some of the guys need some road warrior-like smack laid down on them.

-- Isaiah Crowell - From this moment on, I will refer to Isaiah Crowell as Pussy Crowell. Why? Because Isaiah Crowell is a pussy. You could use other words... pansy, weak, soft, glass-ankled... but none of the sums up quite so nicely the reputation he has built through his actions this season as "pussy."

Some might claim that Crowell has been hobbled by a bum ankle since the second week of the season. To that contention I would respond by asking why he hasn't been held out of games to recover? Georgia's medical staff is not incompetent enough to clear a running back to play who is so injured that he literally can't play more than one play from scrimmage without having to limp off to the sidelines.

When he has come out of games, he hasn't been continually receiving treatment on the medical table or having surgery during the week to fix a problem... they just let him hobble off along the sidelines claming his ankle hurts too much to go in the game. That means his problem isn't with his ankle... it's with his head and his heart.

Or, in other words, he's just a pussy who doesn't like to get hit and can't play with a little pain like the other 99% of his compatriots on the football team have to do. So until further notice, just like the Bond villain, our offensive villain who weakens us at every turn is named Pussy. Pussy Crowell.

-- Georgia's defense - All of the good you have done this season... all of the respect you built by holding LSU's offense to zero first downs in the first half of the SEC Championship Game... all of that has now been obliterated.

You are now not respected, and you now are in a position where you should be ashamed of yourselves. These things are the case because you quit. You gave up before the game was over, and allowed yourselves to be bullied off the field by the selfsame offense whom you had previously shut down completely.

And make no mistake, this wasn't a simple case of LSU's offense making adjustments at halftime. The defense that came out in the second half was a mere shell of the one that played the first half. There was only half the intensity, half the hustle, and half the heart of that squad we initially saw in this game.

And yes,they were put in a very bad position early in the second half by a turnover. And yes, when LSU scored to go up 21-10, we all knew the game was effectively over from that point. But the defense looked like they just stopped playing at that point. Fans can get demoralized and sit down, but the defense can not, and especially not against the #1 team in the country.

For really the first time this year, the defense let us down, and because of that, LSU put 42 points on the board. 7 of those points were legitimately not their fault, but if they hadn't given up like a bunch of cowards, Aaron Murray would not have been so desperate that he had to run the plays that resulted in his pick-6 at the end of the game. So those points can be lain at the defense's feet, as well.

Our defense has been the bedrock of our success this season, and tonight, they were the catalyst of our shameful defeat. They talked big this week about how they were just as good as LSU, but words are cheap. Great teams do their talking on the field, and our talk disappeared in the second half. 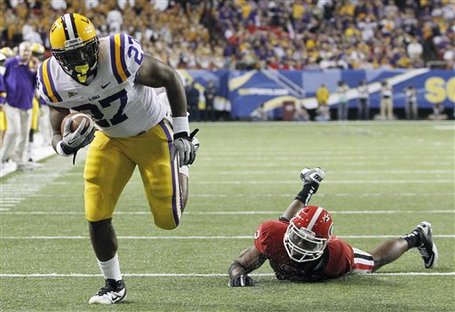 Yeah, this is the general position assumed by quitters.

-- The SEC Officials who fixed called this game - I have seen some poorly-officiated games in my life, but it is truly shameful that an SEC Championship Game would be ranked as one of the worst. I saw Tyrann Mathieu chuck the ball early on his punt return from my seat across the stadium in Section 125, and it is inexcusable incompetence not only that the side judge didn't see it live, but that the replay official completely missed the replay. (And it wasn't like the ball was quickly snapped on a PAT, either... Georgia had an injury on that play, and the official had minutes to look at it.)

If the officials didn't have their heads collectively stuck up their asses on that play, instead of being a game-changing punt return, it would have been a momentum-altering touchback (because the ball went into the endzone and out of bounds), and Georgia would have had a 10-0 halftime lead instead of a 10-7 lead. And those 7 points could have made all the difference in the world from a strategic play calling standpoint early in the 2nd half.

The gross negligence of that non-call, combined with the complete lack of apparent capability to deal with clock problems without ruining the flow of the game, seriously calls into question the objectivity of these referees. I've never been one to buy into the conspiracy theory of "The SEC refs fix games so they can have a team in the national championship game," but one can't help but wonder in the wake of this obvious incompetence.

For the game overall, our team came out with their hair on fire, and the offense, who knew they had to be aggressive against the LSU defense to have any chance, and did just that. They weren't going to outscore LSU, however, and everybody knew that coming into the game. We knew from the start that we had to get to at least 17 points and rely on the defense to make that score total stand up. I don't blame the offense for failing to score 17 points in the first half (though they certainly should have, and might have if Malcolm Mitchell doesn't drop a touchdown pass on the first drive of the game). This game, and the resulting scoreline, is entirely the defense's fault. And, of course, Pussy Crowell's fault.

We have to go forward from here, pick up the pieces, and prepare to beat the snot out of whomever we're paired against in our bowl game. Just for the next 24 hours, though, these players and officials should be ashamed of themselves, and should make a big mental note of this night and day. This is what it feels like when you quit and embarrass your team and your university. Never let it happen again.