Cocktail Friday: Outback Bowl Edition. It's A Sparty In The U.S.A.

Share All sharing options for: Cocktail Friday: Outback Bowl Edition. It's A Sparty In The U.S.A.

We're changing it up a bit this week by providing the weekly gameday libation not on Thursday, but on Friday. I hope you enjoy it, because there won't be another one for quite some time. And I promise it does not include blooming onions or cheesefries. 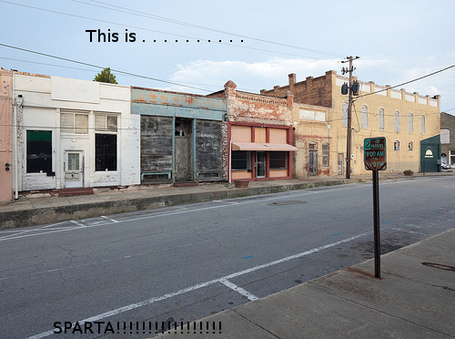 I'm not going to lie. I'm worried about this Outback Bowl. And not in my usual mildly pessimistic manner. No sir. I'm worried about the players who have been asked over and over about their NFL prospects, about the heaping helpings of loaded cheese fries and chocolate thunders from down under, and the curfew which seems to be a little bit of a running joke.

Meanwhile, Michigan State is quietly preparing with aid of live, deadly reptiles. They're remembering last year's beating at the hands of Alabama. I'm sure the Spartans are using that as motivation. One of the overlooked stats of this bowl season has been the curious knot of teams at the top of the FBS total defense rankings. As you can see, LSU is #1 and it's not really close. They're followed by Alabama, Georgia and . . . Michigan State.

I feel like the first of Custer's boys to crest the hill. It's enough to drive a man to drink. My only real hope lies in two advantages. For one, I think that we'll be playing strength-on-strength when the Georgia rush defense goes up against Michigan State's rushing offense. I think our depth on defense, developed over the course of the season as a result of injuries to the likes of Tyson, Ogletree, and Robinson, will be a huge asset.

If Georgia shows up ready to play good fundamental football, I think we have a great shot to beat a really, really good Michigan State football team.

Speaking of fundamentals, this week's cocktail is about as back-to-basics as I can make it. It's the bourbon and coke. What's that you say? You already know how to make a bourbon and coke? You've been doing it since you were seventeen your twenty-first birthday and not a day longer? Fine, but let me ask you this: do you think Jarvis Jones learned how to tackle when he was 10 and just stopped worrying about it? Hell no. He practices the fundamentals, and you should too.

Start with the glass. Reasonable minds can differ about the appropriate B&C glass, but for my money it's hard to beat a good, thick glass in the 12 oz. range. Necessity sometimes requires the use of one of those souvenir plastic ones they dole out at Sanford Stadium. The problem is that those suckers are so thin that every second in your hand puts you that much closer to a watered down drink. And a watered down bourbon and coke is the 3rd down blown coverage of libations. So close to perfection, yet so far away. I prefer the glass because a) it helps me monitor the color of my drink and b) it just feels more refined.

Next, the ice. Do not use chipped or shaved ice. Just don't do it. More surface area equals faster melting time. This isn't 4-for-a-dollar shot night at Pavlov's. We need something with a little staying power. Large cubes work well. Though I have heard wonderful things about these little numbers. I do question their ability to keep a drink cold for very long, but most importantly I am a habitual ice cruncher. And "soapstone" is not what I want to put on the paperwork at my dentist's office under the heading "Reason For Visit".

And then there's the star of the show, the bourbon. One school of thought holds that you don't waste expensive bourbon on a bourbon and coke. I would argue that if it makes a good B&C it isn't wasted. And while I have learned not to equate price with quality, there's something to be said for using a good mid-range bourbon of your choice. Or you could go with Wild Turkey. Jim Incandenza wouldn't fault you for it and neither would I. That being said, I believe that Maker's Mark is perhaps the best bourbon for this application. Remember, you're only using 1 and 1/2 to 2 ounces of the stuff. It's not like you're buying it by the gallon. Though if you are, perhaps that's another discussion altogether.

Finally, the Coke. I swear to God if one of you says you prefer Pepsi you are banned from the clubhouse. And don't be that guy who brings Sam's Choice soda to the tailgate. Have a little pride in yourself and your drink, man. I'm all for saving a dime wherever possible, especially in these tough and uncertain times. But there's just no substitute for the lavendery syrup flavor of Coca Cola Classic in this drink.

Now, the technique. Obviously, the exegencies of the tailgate sometimes require you to make do with what you have on hand. But in a perfect world, you should start by chilling the glass. Don't frost it as you might a beer mug. For one that will make it slippery, for another it will make it watery and third, it's just a waste. After appropriate chilling add 5-6 ice cubes or whiskey stones if you like your B&C the way Barney Rubble would have enjoyed it. Pour 1and 1/2 to 2 ounces of the bourbon of your choice over the rocks.

At this point, the die has been cast. The moving hand has writ. You are locked in. Either you're making the drink or you're wasting bourbon, so for the love of all things holy do not get distracted here. Believe me, it happens. I was once at this stage during a tailgate when the talking heads on College Gameday started making their picks. I got sidetracked, I lost focus. I made an offcolor joke to a buddy of mine about Lee Corso, a sheep and Howard Schnellenberger's pitching wedge. I'm not proud of it, but by the time I got control of myself I had a bourbon and water. I'll never forgive myself. What were we talking about again? Oh yeah, not getting sidetracked.

At this point you need to pour the Coke and pour it quick. I like to give the glass a little swizzle as I pour, though that's a matter of preference I suppose. I like to add about 2/3 of a 12 ounce can of Coke, though you may adjust the strength to your taste. Stir to combine, and you're good. I've heard that some like to add a squeeze of fresh lime juice at this stage. I'm not judging. I'm not saying you shouldn't. Because scurvy is apparently a real kick in the head from what I hear. But I don't do it. Just seems a bit like gilding the lily if you ask me. Have a mimosa tomorrow morning and don't hop any merchant ships to Zanzibar and you should be fine.

And there you have it. The bourbon and Coke. As fundamentally sound a tailgate cocktail as I can concoct. We'll have an open comment thread on Monday and would love for you to be here the celebrate the culmination of one successful football season and the beginning of another. Until then . . .