Share All sharing options for: Don't Bet On It: Bowl Games V 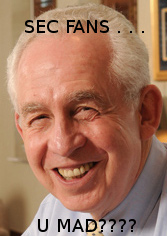 Now that the 2012 football schedule has been released -- be sure to read Kyle's initial thoughts and further analysis, if you haven't already -- and vineyarddawg has put some Dawgs on notice for the Outback Bowl, there's not much football news out there right now... except for the 923,234,542 bowl games to be played in the next two weeks.

In my first set of bowl picks, I went 2-3 against the spread. Ludakit managed to go 3-2 against the spread in his picks. I mention these records to underscore why this feature has its name. I'm not even the best football forecaster on this site, so when I predict the outcome of a football game, Don't Bet On It!

AutoZone Liberty Bowl (Dec. 31st, 3:30 p.m. EST, ABC)
Cincinnati Bearcats vs. Vanderbilt Commodores (-1.5) – James Franklin is a truly remarkable coach. Did you ever think that you would hate Vanderbilt? Me either, and, yet, here we are. His hypocrisy and hyperbole wouldn’t be so aggravating if he weren’t actually putting together a pretty solid football team up in NashVegas, though. But he’s still a year or two away from (potentially) turning them into a legitimate contender. The Commodores just don’t have the horses to keep up with good teams, and Cincinnati is secretly a good team. Two of the Bearcats’ three losses came after QB Zach Collaros broke his ankle, and he is expected to be back as a starter after a faster-than-anticipated recovery. The Bearcats’ only other loss was to a Tennessee team that was playing at 100% before injuries took their toll. You may recall that Vanderbilt gave Tennessee their only SEC win of the year, but by that point of the season the Vols were literally pulling guys out of the frat house to start. Cincinnati’s going to win this one outright.

Kraft Fight Hunger, Dec. 31st, 3:30 p.m. EST, ESPN)
Illinois Fighting Illini (-2.5) vs. UCLA Bruins – The guys over at the Solid Verbal have dubbed this the Kraft Fight Offense Bowl, and with good reason: the Illini have a top 10 defense but only managed to score 11 points per game in their last six games. The Bruins are 85th nationally in points scored. (Even the Green Notebook managed nearly 10 more points per game.) It’s no wonder, then, that both of these teams fired their head coaches at season’s end. The teams’ choices for replacements tell you everything you need to know about these two programs: Illinois choise Tim Beckman, who posted a respectable 21-16 record at Toledo. UCLA chose Jim "L." Mora (Jr.), who has a sterling 0-0 record all-time as a college head coach. Though neither of these men will be coaching in this bowl, it’s fairly obvious that these programs are headed in completely opposite directions. Illinois will comfortably win their seventh game of the 2011 campaign, and UCLA will keep on losing for the foreseeable future.

Chick-fil-A Bowl (Dec. 31st, 7:30 p.m. EST, ESPN)
Virginia Cavaliers vs. Auburn WarTiglesMen (-3) – What a difference a year makes. At this point last year, Auburn was preparing to cap off an unbeaten season by winning a national championship that was immediately pencilled in with an asterisk, and Virginia was preparing for another long off-season after its third consecutive losing campaign. Now The Family's faith in Mean Gene Chizik is being tested, one-time wunderkind Gus Malzahn has taken a pay cut to takeover a Sun Belt team, and the Cavaliers are hoping to build on the momentum built up from coming within one game of winning their division. I know it’s tough to pick against our conference brethren in match-ups with the ACC, but Virginia will be more excited to be there, and Auburn's QB situation is apparently "different." That can't be good for the War Eagles Plainsmen Tigers Barn.

TicketCity Bowl (Jan. 2nd, Noon EST, ESPNU)
Houston Cougars (-6.5) vs. Penn State Nittany Lions – Penn State’s offense is bad. How bad? They rank in the bottom decile in points scored. They lost 3 games despite holding opponents under 16 points per game on average. Their quarterbacks are getting assaulted and battered by their wide receivers. Houston, on the other hand, has one of the best offenses in the nation, at least statistically. Although the Cougars lost their focus (and millions of dollars for their conference) in a loss to Southern Miss in the C-USA championship game, you have to like their chances against a program in transition. Houston wins big.

Capital One Bowl (Jan. 2nd, 1 p.m. EST, ESPN)
Nebraska Cornhuskers vs. South Carolina Gamecocks (-2.5) – Given South Carolina’s recent postseason struggles – the Gamecocks haven’t won a bowl game since 2006 – you’d think that Nebraska might be a favorite here, but Vegas sees things differently. The oddsmakers might be seeing the fact that the Cornhuskers are giving up more than 33 points per game against ranked foes. Or maybe they’re focused on the fact that South Carolina’s stout defense will be facing a decidedly one-dimensional Nebraska attack: the Cornhuskers rank 13th nationally rushing but 103rd nationally passing. Perhaps it’s the fact that Nebraska’s defense has been surprisingly porous against the rush (allowing more than 161 yards per game and 4 yards per carry), and South Carolina’s Brandon Wilds has done an admirable job filling in for the injured Marcus Lattimore. Then again, the bookies could be thinking about Connor Shaw’s wheels in light of Nebraska’s struggles against mobile QBs. (The Huskers gave up a combined 93 points against Wisconsin and Michigan.) Whatever the rationale, you have to go with Vegas and pick the Gamecocks to cover and reach 11 wins for the first time in school history.